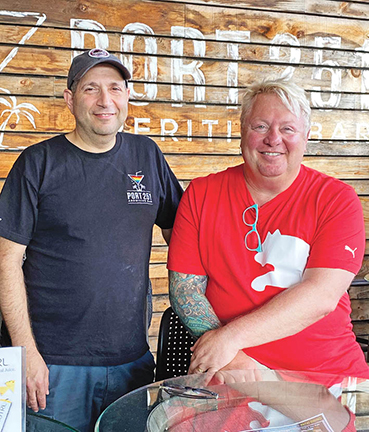 America’s great writer, Walt Whitman, wrote these words. There’s a similar experience happening right on Rehoboth Avenue. Well, with the exception of the bells. They’re from mighty churches and annoying little bicycles tearing down the avenue. But the port is near, and the people are exulting, for there is good food awaiting at Port 251 on the main drag.

After soaking in the large outdoor seating section surrounded by colorful umbrellas, Sally and I were by met by delightful co-owners Tony Sacco and Joe Maggio. The first thing I noticed as I entered this popular section were the pop tunes playing quietly over the eating guests, all songs by the late Olivia Newton-John, who had died that day. Nice touch, gentlemen.

Tony and Joe were friendly and helpful; especially patient when we insisted that they sit through an impromptu photo session led by Sally. She shot several pics before they begrudgingly approved of one. They had us laughing. These two were more than worth the price of admission!

Led to our seats by charming host Thomas, we immediately experienced good service. Nate was friendly, knowledgeable, and efficient, a good server who attended to us with seeming ease. Sally started scouring the adventurous drink menu, settling on a lemon drop martini, rimmed with sugar. Settling is the wrong word. It was sweet and tart, very refreshing. I had a diet soda, which was none of those things.

While we were sipping our respective drinks, we examined the inside of the dining room. The restaurant is an example of what we call Modern Farmhouse, with dark walls and red accents. Sally looked up, noticing gorgeous chandeliers gracing the ceiling. There was even a barn door on the wall. The whole atmosphere is rustic, giving the restaurant an appealing, homey feeling.

Port 251 specializes in the aperitivo, which is similar to “Happy Hour” in America. Dishes looked absolutely splendid, but we came ready to eat our way through the dinner menu. First, the appetizers. Among the many hearty-looking appetizers, Sally chose the Cream of Crab Soup. This version of the Rehoboth favorite was particularly good. Sprinkled with Old Bay, the soup had just the right balance of cream and loads of jumbo lump crab meat. Homemade croutons were a nice complement to the soup.

My appetizer was outstanding. Under the approving eye of Nate, I chose the Stacked Eggplant. Full disclosure, I’m a nut for eggplant, so I was going to like this no matter what. This version had herb cheese, house marinara, and shaved truffle parmigiano. The sauce was excellent: intense and rich. The breading was crispy, something missing in a lot of eggplant dishes. If you like eggplant, this is it!

Then, we ordered the Seared Ahi Tuna as a third appetizer. This came with greens and ponzu. Delicious. You could taste the tuna (no drenching this fish), and the ponzu was perfect. We began asking if there was a bad dish in this restaurant.

I had the pan-seared salmon, nicely done, a piece thick but tender. The glaze brought out the taste of the dish, a salmon lover’s delight.

The crowd that night witnessed a Port 251 miracle. Yes, Sally and I were actually going to order dessert, too. Sally ordered a rich, flourless, chocolate confection: dense, rich, and creamy. Shockingly good. I had a fruity dish, with a topping of ice cream. I say topping, but it was actually bigger than any bowl of ice cream I’d ever seen. When I finished mining my way through the mouthwatering white stuff, I found the prize. Peach cobbler!

This LGBTQIA+-owned restaurant has many additional features to please its customers. There are specials nearly every night of the week, from specially priced filets, to pasta, to burgers, to tacos. Everything in the restaurant is cooked to order. Service is excellent (thanks again, Nate!). And then there’s the entertainment. Port 251 patrons are treated to everything from drag shows to live music. The night we were there was Jazz Night, and we experienced the amazing David Zipse Band, featuring the extraordinary pianist Zipse, and his fellow talent, drummer Ken Schleifer.

So, as Whitman said, the port is near. Port 251, with its colorful umbrellas, rustic atmosphere, great food, and dazzling entertainment, is the destination. Visit, and you will join the people exulting! ▼