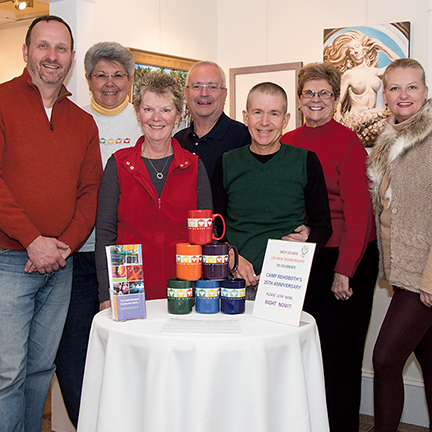 In celebration of the 25th Anniversary, CAMP Rehoboth Treasurer Natalie Moss has generously offered a $5,000 Contribution Match of 100% for each new Rainbow Level Membership received during the Membership Drive.

The Membership Committee is also asking all those who have allowed their membership to lapse to rejoin the CAMP Rehoboth organization and are hoping that many of our current members will upgrade their membership level at the time of their 2015 renewal. CAMP Chorus Concert is a Hit!

This year’s CAMP Rehoboth Chorus Concert titled And the Winner Is...is just that: a real winner! The 80 plus member Chorus features singers such as David Scuccimarra, Gwen Osborne, and Joe DiSalvo. Show host Donna De Kuyper (right) stopped the show with her amazing rendition of “Stand By Your Man.” Tickets are available for the final performance of And the Winner Is...at Del Tech, March 29. camprehoboth.com. Though the Christmas season already seems far behind us, this first issue of Letters from CAMP Rehoboth is the first chance we’ve had to celebrate the prize winning CAMP Rehoboth Christmas parade float. On the left, Chris Beagle and Eric Engelhart share the award with Patty McDaniel of Boardwalk Builders, who provided the space for the float construction. And yes, that’s the CAMP Chorus adding the fa la la la las! The Rehoboth Area Men’s Social (RAMS) Group will celebrate its third anniversary with a St. Patrick’s Day buffet dinner on Saturday, March 14, 2015, at Irish Eyes in Lewes. Cost is $15. Co-hosts are John Keefe and Roy Perdue. RAMS Group is open to all gay, bi and curious men 21 years of age and older in the southern Delaware area. There are no dues or membership fees. To make a reservation for March 14, email RAMS Group or visit RAMS Group.org for more information.

The Rehoboth Beach Bears group is off to a good start. The group which began meeting once a month in 2014 is now working on a larger project, a "Bear Weekend" which has been set for September 10-14, 2015. The Atlantic Sands Hotel & Conference Ctr., will be home base and special room rates for the weekend are already available. Many events are being planned for the weekend. An organizational meeting will be held soon for those interested in volunteering to help host and run the events. Sponsors are needed as well.

"Our "FURst" Friday gatherings at Big Sissies have been consistently well attended" said Jon Rania, one of the local organizers of the group. "December was a big success, especially enthusiastic and uplifting considering the fact that we are in the "off" season now," Rania said.

One of the catalysts for the good turn out in December was the group's efforts along with CAMP Rehoboth and Big Sissies who collaborated to help "stuff" Bryan Hecksher's (also an organizing member) pickup truck full of toys and clothing for needy families in our community.

"We look forward to additional opportunities to  work along with other groups to help out here in our hometown" said Rob Shade, another of the local organizers.

A website with more info created by Chris Unttenreither is up and running and can be viewed at: rehobothbeachbears.com there is also a facebook page: Rehoboth Beach Bears.

The Spring book sale at the Rehoboth Beach Library, 226 Rehoboth Avenue, will be held Saturday, March 7, from 9 a.m.- 2 p.m. in the library’s spacious upstairs meeting room.
As a special treat, there will be a preview sale on Friday, March 6, from 5:30-7:30 p.m. This provides an opportunity to peruse the books before the crowds come Saturday morning. There is a $3 admission fee to the preview sale.

Please plan on stopping by to support the library, buy some books, and say hello to the CAMP Rehoboth volunteers who organize and run the sale. For information, contact the library at 302-227-8044. All proceeds from the sale benefit the Rehoboth Beach Library. Travels With My CAMP Rehoboth Letters

We all know by now that Letters loves to travel and never turns down the chance to do it Olivia style! Joan Smiley, Linda Kemp, Evelyn Maurmeyer, and Natalie Moss celebrated Thanksgiving in the Western Caribbean with a whole library of Letters!. All the way “down under,” CAMP member Lewis Rathbone read Letters on Bondi Beach in Sydney, Australia, and says, “g’day mates,” to all of us still shoveling snow in the northern hemisphere.