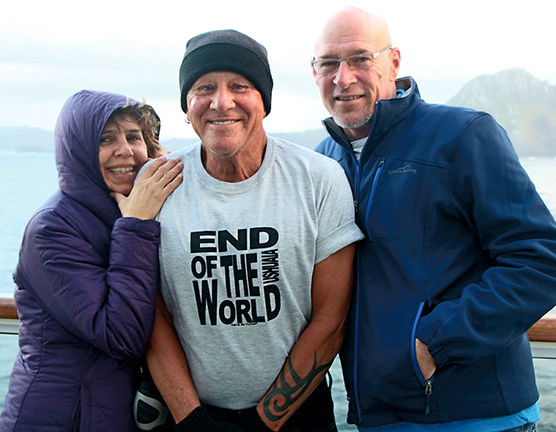 To the End of the World and Back Again

Ushuaia, Argentina is generally considered to be the southernmost city in the world. Certainly the residents pride themselves on it, and will quickly sell passing tourists “end of the world” t-shirts to bolster their claim. The naturalist onboard the Celebrity Infinity—home to the CAMP Rehoboth cruisers for the last two weeks in January—did observe that there was a town a little bit further south, but Ushuaia claimed the title before it, thus cementing its reputation.

Regardless of what it is called, Patagonia—the southernmost part of South America (with Chile on the west coast, and Argentina on the east)—is a starkly beautiful area that combines the lower Andes mountain range with deserts and windswept grasslands. Throughout our trip, we were blessed with amazing weather, even in places that don’t usually have it. As the ship circled Cape Horn—a notoriously cloudy place—the sun burst through the grey morning clouds and gave us an excellent view of the lonely lighthouse and home of the islands sole occupants: the lighthouse keeper, his wife, and his two children. I’m told, shortly after we passed by the Horn, the clouds and fog closed back in on the Princess ship cruising behind us. To say that the first CAMP Rehoboth cruise was a success would be a huge understatement, to say the least. It was a spectacular adventure, made all the better because we shared it with friends! The trip was made possible by Annette and Rick Stellhorn and their amazing crew at Accent on Travel. We first met Annette and Rick several years ago, because at the time, then CAMP Rehoboth Board member Howard Menaker and his partner Rehoboth City Commissioner Patrick Gossett met them on a cruise ship. Howard and Patrick returned to RB singing their praises, and insisting that Steve and I get together with them to talk about future partnerships. Since that momentous introduction, Accent on Travel has assembled cruises for Sundance that have raised thousands of dollars for CAMP Rehoboth—and, of course, they customized our CAMP Cruise to make it a very special, once-in-a-lifetime experience for all of us lucky enough to be a part of it. Thank you Annette and Rick for your friendship, your commitment to CAMP Rehoboth, and for your patience with all of our traveling idiosyncrasies. I would also say to everyone in our community, start saving now, because there will most certainly be a second CAMP Cruise sometime in the future!

As is usually the case, there’s nothing better than a splendid vacation to get one’s creative juices working overtime, and I would be hard pressed to remember a February when I felt so energized and excited about the coming year. I’m attributing that to our trip, but it’s also because this is the 25th Anniversary year for CAMP Rehoboth, and we’ve got some big plans in the making!
I’m not, just yet, done talking about our cruise, and to that end, have included as many cruise photos as possible on these pages and in CAMPshots. All journeys are made up of many stops, however, and before I get back to our “end of the world” cruise, there are a couple of CAMP matters that need to be mentioned. First, it was with great sadness that we learned of the passing of our longtime Sundance DJ and friend Mark Thomas. Our history with Mark dates back to the1980s when he was one of the DJs at the now legendary Saint nightclub in New York City. In Rehoboth, he played often during the heyday of the Strand nightclub on Rehoboth Avenue in the late 80s and early 90s. In the past 27 years, he played Sundance 25 times.

I received the news of Mark’s sudden death in a text while we were on the CAMP Cruise. Appropriately, we were on the dancefloor when the news arrived. It was a touching moment, and Steve and I were glad to be surrounded by friends—Sondra Arkin, Ward Ellinger, Allen Jarmon, and Eric Korpon. We quietly shed a few tears, shared some memories, and made a toast to Mark and all the years he kept us dancing.

Second, here at CAMP Rehoboth, the first quarter of 2015 has been set aside for our annual membership drive. Members play a huge role in helping our organization stay within our budget, and we are fortunate to have so much support from our community. In fact, by March of this year, we expect that the total amount raised from our membership program over the years will pass the $1 million mark. Because of our members we are able to provide community space, operate support groups and our magnificent CAMP Rehoboth Chorus (by the way, if you missed their awesome 2015 show And the Winner Is…, run to our website right now, and purchase a ticket to the Del Tech performance on March 29!). Members provide funding for multiple programs and activities including: art shows, performance space, diversity training, state and local LGBT advocacy, tourist information, Women’s FEST, HIV prevention and education, home care for the sick, and much, much more. Like NPR and PBS (and all other groups who depend on members and donations for survival) we promise to stop talking about it for the year once we meet our annual goal. We are especially thankful this year that our CAMP Treasurer Natalie Moss is matching up to $5,000 in new/upgraded memberships. So what do CAMP Rehoboth membership and the death of a beloved friend have to do with an “end-of-the-world” cruise? Let me put it this way. The naturalist onboard our ship, the one I mentioned earlier, used a tagline at the end of his lectures:
“Do something amazing.”

That phrase stuck with me while onboard the ship, and challenged me to finish an exhausting hike on a volcano in Chile, and brave 70 mph wind gusts just to get off the pier in Ushuaia. More than just a challenge onboard the ship, that phrase has also stuck with me now that we’re back at home—and it reminds me that we don’t have to go to the “ends of the earth” to do something amazing: 25 years of CAMP Rehoboth is amazing! Playing music at the same party for 25 years is amazing! Living in a community like Rehoboth Beach is amazing! Being married to the man I love in the state where I live is amazing! In short…life is amazing, and I am very, very thankful that this trip reminded me that even the everyday tasks we face (including raising money to support this amazing organization) are amazing in themselves because we believe in the work we do here at CAMP Rehoboth and in our community.

Apparently, like the magnificent Patty LaBelle, I’ve come back from vacation with a “new attitude!”

Now let’s go do something amazing! Murray Archibald, CAMP Co-founder and President of the Board of Directors of CAMP Rehoboth, is an artist in Rehoboth Beach. Photos: Sondra Arkin, Ward Ellinger, and Allen Jarmon on the ship at Cape Horn. Penguins on Magdalena Island, Chile (in the Strait of Magellan, northeast of Punta Arenas, Chile). A pink anchor and the Celebrity Infinity in port at Montevideo, Uruguay. Celebrity Infinity Martini Bar; Steven Haber competes on Top Chef at Sea; Lunch on the beach in Punta del Este, Uruguay.

“...a once-in-a-lifetime South American experience. The trip exceeded our expectations, and we will hold the memories in our hearts always. Thanks also goes out to the Accent on Travel staff for coordinating and facilitating the trip. Well done, guys. Well done.” — Linda Miniscalco

“For all of the confusion out there about CAMP Rehoboth being a kid's camp, it struck me funny that going on a cruise was a little bit like going to camp. There were lots of activities, meet ups and sing-alongs, talent shows and Top Chef, and our core "cabins" – so to speak – among the larger group.... We each have our own highlights but mine by far was scenic, capped by sharing moments with some of my best friends, and forging some new ones. “— Sondra Arkin