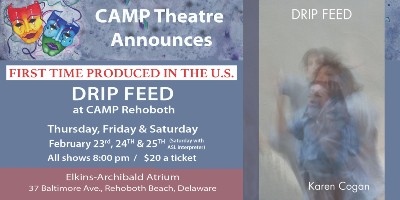 For the first time produced in the U.S., the CAMP Rehoboth Theatre Company presents Drip Feed, a one-woman show by Karen Cogan, directed by Russell Stiles, and starring Tara Wisely.

D﻿ates: February 23-25, 8 p.m. at CAMP Rehoboth's Elkins-Archibald Atrium. The Saturday show will include an ASL interpreter.

Cork, 1998. An obsessive odyssey through the city. Dancing on tables, 3 a.m. breakfast rolls and waking up, polluted, on the wrong person's doorstep. Brenda and her ferocious best pal are part of the city furniture. But one of them is realising that she's got it all, all of it, horribly wrong and it might be too late.

Karen Cogan's monologue play Drip Feed is an infectious, dark comedy about the messiness of being young(ish), female and queer.

Brenda sits contemplating a messy night out, which quickly escalates into a reflection on her entire adult experience. Nursing a disgusting hangover, she investigates the actions of her past, and attempts to regain control of her downward spiraling life. Containing a fine balance of humour and horror, this is storytelling at its finest. The audience are immersed into a world of ferocity, ecstasy and delight.

The play was shortlisted for the Verity Bargate Award 2017, and premiered at Assembly George Square as part of the 2018 Edinburgh Festival Fringe, in a co-production between Fishamble and Soho Theatre, London.

‘Dark and cheery, drunk and teary, Drip Feed is eventful, to say the least. Karen Cogan’s non-stop, no-pity delivery of a day in the life of ‘Brenda’ renders a genuinely dark story. Perhaps apt considering the material: Brenda is gay, Irish, works in a smelly café and follows her ex-girlfriend around.’

Tara Wisely is an accountant by day, actor by night. She lives in Lewes with her husband Charles and, at times, one or more of her three grown children. She studied theater and performing in her younger days, and was excited to return to the regular practice of it in 2012 subsequent to transplanting to Delaware from Long Island, New York. Favorite roles over those past ten years include Sonia in Christopher Durang's "Vanya, and Sonia, and Masha and Spike", Beatrice in "Much Ado About Nothing" and Julia in Edward Albee's "A Delicate Balance." Her most recent role was as Violet in the musical "9 to 5" at Clear Space Theatre, where she greatly enjoyed performing music and lyrics by the iconic Dolly Parton. She was drawn to the character of Brenda in Karen Cogan's "Drip Feed" by her raw honesty with her audience. The question of how much our life experiences and conditions shape our choices, and how much control we really have over those choices is pointedly explored here and will stay with the audience long after the show. Nothing feels held back in the writing, and the chance to embody Brenda in the dual roles of both the storyteller and the subject of her bumpy ride of a story within the intimate structure of a solo performance was not one to be missed.