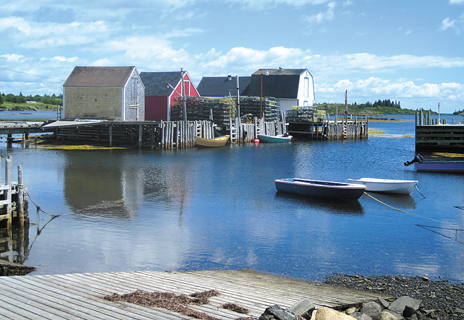 Hello from Fay and Bonnie’s first RV trip in our 27 ft. vehicle, towing a Chevy Tracker, and housing us, our two schnauzers, and my computer—so I can vacation while putting finishing touches on my new book, For Frying Out Loud—Rehoboth Beach Diaries.

RV life has a learning curve. We drove through Lexington and Concord, Mass. In this case the shot heard ‘round the world was Bonnie leaning forward to play with the GPS and accidentally honking the horn with her chest. Oops.

Lessons: 1. Put Tracker emergency brake on before unhooking to avoid a Bonnie sandwich between car and camper. 2. Keep pliers handy at all times. 3. If you are in the car everything you need is in the camper, or vice versa.
In Salem we saw the Witch House. When they talk about the trials they use it to teach tolerance, including LGBT issues. Yay! In Bah Hahbah we went to our first lobster pound. Messy, very messy, but good, like a lot of things.

As RV newbies we don’t know where to stow everything. After three days this place looks like a reality TV hoarder episode. And don’t even talk to me about the “spaghetti” of wires from laptop, phone charger, iPod, camera charger, oy!

Arrived in New Brunswick, Canada, where they recognize our Vancouver marriage—unless we divorce after trying to hook-up, unhook, level, stow or otherwise fiddle with all the gear and systems in our traveling circus.

Left as early as possible considering you have to detach, disengage and otherwise undo yourself from each location. I stand around holding the bag with the pins and chocks and pliers, etc. That’s me, left holding the bag.

At border got the once-over by Canadian feds—they said it was random, but I’m wondering what’s in my Homeland Security file. Detoured for construction on Crotch Hill Road (really) along the Bay of Fundy and our GPS (The Bitch on the Dashboard) had a meltdown, sending us the wrong way. Almost caught sunrise at Campobello by mistake.

In St. John, NB saw the reverse waterfall…a small falls, where the tidal change comes in and makes it look like the falls runs up. If you lived in St. John the small ripple would be your big tourist attraction, too…. The imagined romantic campsite is just a big gravel and crabgrass parking lot. Oh well. If anybody knows where I can get those lights airport workers use to direct airplanes into the gates, please advise.

Along the Bay of Fundy, we walked the muddy stone-filled river bed at low tide; fishing boats grounded two stories down from the docks. Waited for tide to return. I don’t think this is what they mean by tidal bore, but…. It was like watching paint dry. Then again, like paint, dramatic when done. Had a chowdah suppah while sittin’ on the dock of the bay. Now working on the book again. Peaceful in the RV and a great way to get away from distractions.

Off to Nova Scotia. Bonnie is unhooking the rig and sewer; I am hiding inside….

Drove and drove past expanses of absolutely nothing dotted by farms, lakes and additional nothing. Green, pretty. Very few houses and people. Kept driving. Fay and Bonnie went to Nova Scotia and all I got were these lousy hemorrhoids.

Arrived in Halifax for the Pride Parade. Huge! Everyone seemed to come out, if you’ll excuse the expression, to watch—gay, straight, families with kids, gay police, firefighters, drag queens, very, very, very cool…. I’ve been carded twice this week: once for my Senior Pass to our National Parks and once to get into a gay bar. Irony?

Okay, Nova Scotia is spectacular. The most stunning sight was Peggy’s Cove lighthouse atop the incredible outcropping of boulders, nestled in fog and hauntingly beautiful. Historic Lunenburg and Mahone Bay are lovely, architecturally gorgeous fishing villages.

“Stayed home” tonight dining on fish and chips, and writing. This trip is providing plenty of stories!

Yeah, just one ugly vista after another here…boats and lighthouses and fishing shacks and….

Drove to our campground in Cape Breton. They must be into S&M here because they gave us a ski slope camp site. I put the level on the counter and couldn’t find the bubble. We broke out the wood chocks (how much wood could a wood chock chock if a…), put them under the left side tires and backed up onto them. After several tries (“back up, no, go forward, STOP, you’re not back far enough, oh, shit”) we went inside for martinis. It was like cocktails on the Titanic. Darn, we had to have lobster, mussels and chowder again for dinner. This writer’s life is tough.

Drove the famous eight-hour Cabot trail loop, Schnauzers in the back seat (Dog is my co-pilot). Once again, crummy weather, with fog and drizzle. While photo ops suffered, we loved the roller coaster ride along the very edge of the sea, up high in the mountains, then plunging to incredible valleys, twisting, turning on the narrow road, overlooking spectacular cliffs and mountain ranges, fishing villages, seafood restaurants and pottery, glass, leather, basket-weaving and tchotchke artisans. Amazing vistas I cannot even attempt to describe. See it someday if you can.

As for RV life, I’m loving it. The book is going well, and I adore working in the RV. At a certain point we stopped caring if our clothes matched and started to look like vagrants. Will work for lobster.

Must have pissed off Mother Nature. Drizzle and fog again. If Bonnie hadn’t worn a Gorton’s Yellow slicker I would have lost her entirely. Drove two more hours on that damn Cabot trail and still no moose sightings, despite Moose Crossing signs everywhere.

We headed to dinner at a local distillery and inn when GPS bitch told us to turn left onto a skinny unpaved road. I said no but my adventurous mate overruled me. First it was gravel, then dirt, then mud with grass growing between tire tracks, then muddy ruts, deep puddles, and finally massive axle-threatening sink holes. Dark forest beckoned on either side, no signs of life, moose or otherwise, as we bucked forward, deeper and deeper into the mire. I panicked. No bars on the cell phone. We’ll get stuck, blow a tire! It’s getting dark, my God, all they’ll find of us will be bones and golf clubs. Turn around! Turn around!

Bonnie, of course was not rattled. Then the dashboard moron said “Continue 11 miles.” Hell, twenty minutes into this mess we’d only gone a mile and a half. Whether it was 11 or 40 more the outcome seemed identical—they’d find us sometime in April.

Finally, Bonnie agreed to u-turn (no easy task) and we retreated, our teeth and the car’s chassis ratting as we bounced and banged and crept our way back to the main road. The only sign we saw on the way said SLOW. We howled. And when we got to the distillery, we partook.

And of course, still no moose sightings….

In Truro, NS. Dined on great pancakes this morning at Sugar Moon Maple Farm. There was a rainbow sticker on the door and we found our people—a table full of women of a certain age breakfasting there as well. Had terrific pancakes with freshly made maple syrup, maple sausage, maple baked beans and maple whipped cream atop coffee. We’re lucky Paddy the Schnauzer is still the only one in the family with diabetes.

And then we saw the moose. Sadly it was in a nature preserve where Bonnie dragged me because she was sick of my complaining about no moose sightings. There, in a large field was a big old moose with his lovely moose wife. What a rack, as they say—on him, not her. And Mr. Moose came right up to me, stared me in the eye and…sneezed. God bless him, the big brown beast. I can leave Canada tomorrow a happy camper, having seen my chocolate moose.

Back in U.S. to Calais, ME. Situated near the border of a bilingual country, I assumed it was pronounced a la francais (Ca-lay), but no, it is pronounced like what happens to your hands when you do too much manual labor, not that I’d know.

Met our friend Alan and his partner Kent for dinner. Do you know that TV reality show, the Fabulous Beekman Boys about the two New York gay guys who buy a farm and fight all the time? It should be called the Fabulous Bicker Boys. I mention this because Kent is a farmer and now he and Alan are the real life gay farmers, much more real than reality TV.

Then we drove several hours across middle of nowhere Maine, stopping for a good but greasy Italian sub in the town of Passagassamaqueeg. There’s nothing I can say more amusing than the lunch menu in concert with the name of the town.

Our campsite in Rockport, ME is the kind I’d always pictured. Large wooded sites, turned so your neighbor’s rig is not in your face. Gorgeous. And there was a path to the water where Bonnie and I, along with Moxie and Paddy sat in Adirondack chairs, sipping Bacardi Sangria (Black cherry soda for adults), overlooking a wide, rocky-coasted bay.

Then, tonight I simply fell in love with Camden, ME with its busy, beautiful harbor, historic buildings, shops and galleries I cannot afford and a mean bowl of clam chowder. Ahhhhhh.

Okay, Uncle. After two scrumptious lobsters each at the Eating Tent at the 63rd Annual Maine Lobster Festival in Rockport, we concede. Enough with the lobster dinners, lobster jewelry, lobster watercolors, lobster pajamas, lobster toilet paper, lobster forehead (It was HOT!) etc…somebody get me a hamburger.

I see gay people! Rainbows abound in Ogunquit, ME, our last stop on this whistle-stop tour. Another beautiful Maine town, but with a queer bent. Hooray!

Went fishing and Bonnie is irritated because I caught a fish and she didn’t. I reminded her we should both be irritated since the resulting filet was pretty much a $108 McDonald’s fish sandwich. But the boat ride was waaaay fun.

Heading home, with my book finished(!), a bus filled with souvenirs and newly purchased RV accessories we didn’t know we needed and our heads filled with places we want to head out to next…in the meantime, see you in Reho…I’ve missed my hometown!

Fay Jacobs is the author of As I Lay Frying—a Rehoboth Beach Memoir and Fried & True—Tales from Rehoboth Beach. Contact her at www.fayjacobs.com.