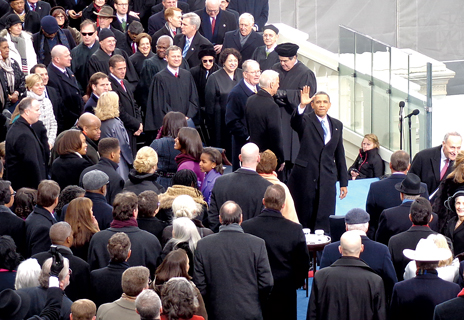 How MLK met MILK: Somewhere Between Selma and Stonewall

In this Inaugural Wheel of Fortune, I’d like to buy a vowel—and appropriately it is an “I.” When our President rhetorically walked us from Selma to Stonewall, he invited us each to add an “I.” And for equality’s sake MLK and Harvey Milk were finally linked. We shall overcome. And I was overcome.

Before any of the President’s “gay brothers and sisters” heard those words that changed the game forever, inauguration day started with the usual measure of pride tempered with the nagging thought of the chronic low grade prejudices that still exist. But the Lesbian and Gay Band Association of America was slated for the parade. Reports were that they had selected St. Stephen Sondheim’s "Tonight, Tonight" for their performance at the reviewing stand:

Tonight tonight
Won’t be just any night
Tonight there will be no morning star
Tonight Tonight
I’ll see my love tonight
And for us, stars will stop where they are
Today, the minutes seem like hours
The hours go so slowly
And still the sky is light
Oh moon, grow bright
And make this endless day endless night

And there waiting in the parade formation line (“the hours go so slowly’) the unsuspecting members of the band thought they’re just lucky to be included. Then Obama said it—first a whisper of “from Seneca Falls to Selma to Stonewall” then the full throated “our gay brothers and sisters”—the historical inaugural shout out to those brave enough to be out. Pow. Stars indeed stopped where they were. The moon grew bright —and endless day grew into endless night. Homo-hallelujiah!  The boys and the girls in the LGBTQ band were thrust center stage.

With a million emotions swirling, I think Mrs. Marian Robinson provides the canvas upon which all this history of progress is written. Just think, the FGOTUS (First Grandmother of the US) was just two years old when Eleanor Roosevelt extended the invitation to Marion Anderson to sing at the Lincoln Memorial. She could see it from the dais. She was just 18 in 1955 when Rosa Parks sat down on that Birmingham bus. How can any African American not remember the heinous use of fire hoses, guard dogs, and the burnt churches strewn along the path to equality? In 1964, Mrs. Robinson gave birth to Michele, the future first lady. It was the same year her voting rights were granted. Could she possibly have known then she’d one day vote for—and elect— the man her tiny newborn daughter would marry? That’s a long way from Selma. And you thought your parents stood over the crib and dreamed! Here’s to you, Mrs. Robinson.

I don’t know what my parents dreamed for me as they hovered above my crib, but it sure wasn’t, “I hope he’s gay!” So, I was a shy and reserved 15 year old when the Stonewall riot broke out.  I doubt word even reached New Orleans and—if it did— no one spoke of it. In the days of Mad Men, society decided as a whole that “those people” would either stifle themselves, straighten themselves out, or live the lonely life of the circus freak.  So my crush on Little Joe on Bonanza would never leave the corral. And Gomer would wait to come out at 82.

So, that’s when as a gay person, you use the internal self-deportation technique.  You don’t need to go to Mexico. Just deny, deaden, and dull every impulse you have. It’s a sad lonesome and very painful young life. You unleash your own guard dogs on yourself—aim your own fire hoses at your budding libido. And we didn’t need to burn our churches—just live in the constant fear that our church would burn us. When Harvey Milk was assassinated in 1978, I was still stuck in the closet. College should have been raucous fun and coming of sexual age—but I didn’t feel I had the right to every freshman’s passage: to gain 15 pounds and get laid.   Completely inhibited, I skipped getting laid and gained 30 lbs. instead.  Harvey’s life was completely irrelevant to mine, until I finally came out and got in touch with the gay history of oppression.

As sad as it is, the African American experience was a shared experience. No matter how hard life was, your family was under the same cloud as you were. Not so with us gay folk. Each and everyone of us had to suffer silently and alone.

Or so it was until the President of the United States of America called us his “gay brothers and sisters” on inauguration day 2013. When he stopped to look back for that now infamous last look, he saw each and every one of us. It’s a day we’ll never forget—a day where MLK met MILK. Thank, you, Mr. President.