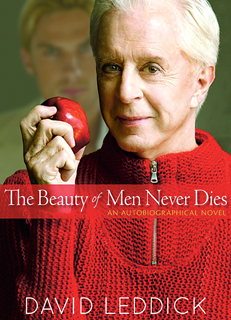 You never thought you’d get this old.

When you were five, for instance, twelve was a big age.

At twelve, you thought twenty-one was the height of maturity.

At twenty-one, eighty seems unattainable. Yet, somewhere along the line, you learn what it takes to use the years well.

Does wisdom come with age? Is it something else? Or, in the new book The Beauty of Men Never Dies: An Autobiographical Novel by David Leddick, could it be both?

Somewhere in his seventh decade, David Leddick still has a sex life.

He wants to have a sex life until he’s ninety. “If I can achieve that,” he says, “then I feel I can say my life was a success.” There’s a good chance he’ll do it, too, because Leddick falls in love on a regular basis, though he only really counts four men from his past as significant. He might’ve only imagined an attraction, however. And there was one that he would’ve married, even though they never slept together.

The man he writes about most, though, was the one he met in Uruguay: Fenil (sounds like “fennel”) was a twenty-one-year-old policeman who had supplemented his salary by having sex with men and women. Leddick loved him, but it was doomed to be a chaste relationship—perhaps because Fenil was young enough to be Leddick’s grandson, and perhaps because Fenil claimed to be more attracted to women.

Leddick himself was an older man when he came out as gay. He wishes now that he’d taken “a stronger stand on admitting my gayness.” He also wishes he’d admitted deception when he denied spending years in the closet. He grew up in the middle of a large-ish family in Michigan. Could that have anything to do with it?

Today, Leddick travels often, and lived in Paris for a time. He talks to God now and then, and he knows that, at seventy-something, there will be times when he must “go forward alone.” And yet, “The life I am living now is as interesting, perhaps more so, than any other period of my life.”

So. Fiction or non-fiction?

The answer is “Yes.” This book is a little of this, a smidge of that, and a lot of fun.

Author David Leddick admits that he made up some of what’s inside The Beauty of Men Never Dies and while some of the stories are easy to spot as such, readers are left wondering what part of this book is more than just imagination. In that respect, Leddick almost teases us, and since he has a droll wit that’s as dry as Death Valley and a keen eye for human foibles, we can happily go along with the joke.

And if that’s what you need this week (along with a few tears and some things that will make you think), then I think you need The Beauty of Men Never Dies. When it comes to essays, stuff like this never grows old.