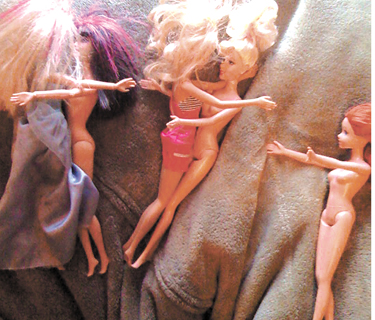 The Times They Are a Changin’…or Are They?

Recently, a lesbian friend showed me a photo she got from her married daughter. There were five Barbie Dolls on a blanket. Two pairs of Barbies lay tangled in hot embraces and the fifth, had outstretched arms, as if to say “What about me?” The display was staged by a four year old.

Now it goes to my point about change, that Mom didn’t flinch and even added the text “Hmmmmm...I have no words.” Grandma just laughed.

That incident was followed the next day by an episode of Rizzoli and Isles, the new cop show with Angie Harmon and Sasha Alexander solving brutal murders. In this case, a lesbian wearing a wedding ring was killed outside a Boston club. As the police do in most murder investigations, they suspected the spouse first. “Think it’s the wife?” one cop said to the other. Only as far as I can tell, this was the first time mainstream TV has matter-of-factly included a same sex Massachusetts wife as a matter-of-fact suspect.

To solve the crime, Angie Harmon went undercover at the gay bar. What could have been a field day for snarky homophobic innuendo, simply wasn’t. The scene was tasteful, hilarious, and the best part (spoiler alert, if you haven’t watched this one yet), was the discovery that wifey did do it, so frankly, we’re being treated just like everyone else…huzzah!

On the big screen change has come by way of Angelina Jolie in Salt. I know she’s not playing for our team, but in this
frenetic spy film she does the same butch action hero stuff as any given James Bond. She leaps from windows, lands on moving vehicles and positively kicks butt. It’s a lipstick lesbian fantasy if ever there was one, and that her behavior is acceptable to all speaks volumes about the new normal for the role of women, gay or otherwise.

We’ve come a long way, baby, judging by the way women were treated in the 60s and shown on TV’s Mad Men, the drama about New York’s Madison Avenue advertising business. We see agency execs gulp booze in the office and engage in rabid ogling of their secretaries. In that culture, women were grossly disrespected and consistently denied opportunity. Their simmering rage finally touched off the feminist bonfire.

And Angelina Joile in Salt is the apex of feminism.

“It doesn’t get any more equal than that,” said one of six post-feminist lesbians sitting at my dining room table last week, recalling the quaint phrase “women’s lib” and the forty-year evolution of women’s rights.

“Remember those consciousness raising sessions—you know, where everybody got a mirror and looked at their own body parts?”

“Did that actually happen? I think it was a myth, like burning bras.”

“Well, Gloria Steinem must have done it.”

“My god, there’s no way I could do that today, my body won’t bend that way.”

“I’d need a forklift to get back up.”

“Can you see us all in the emergency room trying to explain what happened?”

I laughed so hard I had to leave the room and readers of a certain age know why.

The conversation then turned to the film The Kids Are All Right, starring Julianne Moore and Annette Bening.

Now Annette Bening is my one dispensation. If you are coupled, do you have a celebrity monogamy dispensation? My spouse of 28-plus years would wink and look the other way if I had the chance to um…go out on a date with Annette Bening. Like that’s gonna happen. But the dispensation has been offered and accepted, just in case hell should freeze over.

The Kids Are All Right, is an honest depiction of a very contemporary long-term lesbian relationship. Annette and Julianne play characters who love each other but are navigating a rough patch. Their son seeks out his sperm donor father and the story turns hilarious and insightful, examining a marriage being tested, tried and ultimately (well, I won’t say…).

What’s fun, and very encouraging, is that author-director Lisa Cholodenko did not shy away from showing a dysfunctional gay family, thereby proving exactly how equal we can be to a family suffering heterosexual dysfunction.

But my favorite clue that the film signals change is that Cholodenko was not afraid to piss off lesbian audiences (I am side-stepping a spoiler here) by having the plot take a turn lots of people might have wished it hadn’t. That being said, Julianne Moore’s final speech is so magical, and the performances so stunning and fun (way to go, Annette!), the film works for many, many satisfying reasons.

All this being said, I closed my eyes the other night, hopeful that things are improving for gay people, with the country coming around (albeit slowly) to the concept of equality for all, including gay marriage equality.

What was I thinking? By morning, I learned that tea-bagging, gay baiting, coven-joining, reparative therapy-endorsing right-wing nut bag Christine O’Donnell had won the Republican Nomination to run for the Senate in Delaware. I wanted to hurl. Not only do her politics and ethics offend me (she’s been illegally living on campaign funds) but as an editor I’m aghast—she makes up words. Today’s was “factuous,” as in “those claims are not factuous.” Yesterday she said “The United States is the free-est place in the country.” And she thinks we’re not worthy?

In bad news to worse, a local Aryan Nation organization (yes, there is one here) marched for White Power on the shore this weekend.

So I’m trying to hang onto the two steps forward, one step back theory to keep my sanity, but it’s tough. I close my eyes and fanatisize Angelina Jolie swooping down on those hate-filled Aryan marchers and kicking the living daylights out of them. And while she’s busy, maybe Rizolli and Isles can get Christine O’Donnell into an interrogation room to confess about the root of her raging homophobia.

And oh yeah, while all that’s going on, maybe Annette Bening and I can sneak away for a martini.

Fay Jacobs is the author of As I Lay Frying—a Rehoboth Beach Memoir and Fried & True—Tales from Rehoboth Beach, and the soon to be released For Frying Out Loud—Rehoboth Beach Diaries. Contact her at www.fayjacobs.com.