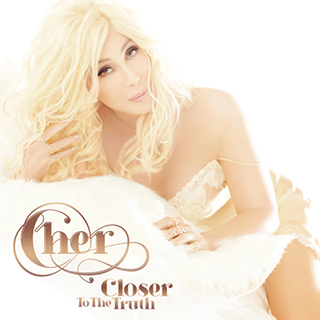 Cher, Closer to the Truth

To find the truth on Cher’s first album of new material in 12 years, look beyond that over-polished, Britney-circa-Femme Fatale-era cover art, wherein the diva must’ve confused this shoot for a JCPenney underwear catalog. The truth, it turns out, isn’t immediately apparent; it exists not in a 67-year-old woman trying to be a pinup girl, but in the frankness of Cher’s always-authentic self, when she preaches feminism (“Woman’s World”), tells a prospective lover to “Take It Like a Man” and, at her most honest, warns of her lethal wig-wearing, sequin-shimmering style (“Dressed to Kill”). Picking up where 2001’s Living Proof left off—when Cher, impossible as it sounds, got even gayer—Closer to the Truth, her 26th LP, keeps the gays at her feet and on their knees; all three of the aforementioned songs pulse and bounce and bang like the icon never left the dance floor. And that’s only somewhat problematic, since some of these aren’t quite as ageless as the diva herself. “Woman’s World,” the first single, sounds very turn-of-the-millennium. One of two Pink-scribed contributions, “I Walk Alone,” exercises a country march that both befits early-era Cher and shakes up the sameness of the more vanilla-produced dance jams. Then she gets back to ballads, making magic out of “Sirens,” a glorious slow tempo that proves the timelessness of her voice, and breaking your heart just a little on her cover of Miley Cyrus’ “I Hope You Find It.” The truth is, Cher doesn’t need to turn back time. She’s fine right where she is. Grade: B+

Icona Pop seemed destined to fall into one-hit-wonder obscurity after “I Love It” gained ubiquitous exposure via club play, commercial spots and—not even kidding—as the theme song for the MTV Jersey Shore spinoff Snooki & JWoww. Their other chants couldn’t be that fun, that infectious, that delicious. Except they are. The Swedish synth-pop duo of Caroline Hjelt and Aino Jawo—with their endearing, no-pretense irresistibility—could be your BFFs...if your BFFs wrote joyous dance-pop, bedroom-romping earworms; recorded “In the Stars,” a song that takes you to the sun; and had all the makings for one of the most exciting musical breakthroughs this year. There’s really not a single miss on This Is..., unless you’re a sour puss able to resist the nonstop rush of joyous synth bursts atop ’80s-inspired melodies. From bubbly second single “All Night” to “Then We Kiss,” a fun-loving coda with a Go-Go’s ilk, the girls keep the party balloons bouncing. And when they pop and fall to the floor—like on the lovelorn “Just Another Night,” the closest they come to a ballad, and its fight-song match “Hold On”—they strike a similar authenticity that expands their girls-next-door appeal. Yeah, even pop stars get broken hearts. As an introduction to Icona Pop, This Is... sounds both familiar and like nothing you’ve ever heard. It’s not a game changer, it won’t revolutionize pop music, but it’s fun and unforgettable. I love it, and I don’t care. Grade: A-

Patty Griffin’s career-defining Silver Bell is the little engine that could—“the lost album” that her then-label A&M Records shelved and is now, 13 years later, thankfully getting a proper release. Treasured within the singer-songwriter’s fan circle for those poetic compositions and her musical eclecticism (among those diehards are the Dixie Chicks, who covered two of the album’s best tunes, “Truth #2” and “Top of the World”), the LP is another diamond in Griffin’s crown. And newly mixed by Glyn Johns, Griffin’s painterly voice is front and center—right where it belongs.