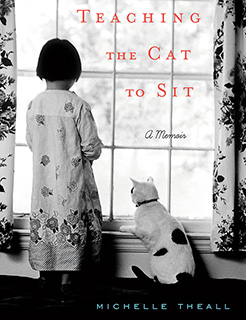 Sometimes, you feel so adrift.

Unmoored, unanchored, you feel as though you ride each wave alone, emotions and events washing over you until you can’t weather the storm any longer and you need an anchor. That’s when you reach for your family or your God.

But what if both were denied to you? In Teaching the Cat to Sit, Michelle Theall shares her story of standing up instead of standing still.

Al Theall and his wife were sure their second child, born in 1966, would be a boy but—surprise!—they got another daughter. Later, they were even more astounded that their second girl was so different from the first one: unlike her older, popular, outgoing sister, Michelle grew to be athletic, bullheaded, and introverted; in fact, aside from the cat, her only friend was a neighbor girl whose parents had scandalously been divorced.

Divorce, of course, was against the teachings of the Catholic Church, the religion that Theall’s mother devoutly followed. She was reluctant to even let her daughter play at the Crandall’s house, but reasoned that Theall needed one friend.

That bond ended abruptly when the girl’s father molested Theall.

In high school, Theall had an Evangelical Christian friend, but the girl’s mother thought Theall was a lesbian, and put an end to the relationship. That hurt, because Theall herself didn’t yet realize her sexuality.

After a sweet and almost-accidental love affair with another woman while at college, Theall examined her sexual preferences and felt deeply ashamed. Catholicism taught that being gay was a sin against God. Her parents would not accept her as a lesbian. She tried to be heterosexual, but that wasn’t who she was—so, upon graduation from Texas Tech, she moved to Colorado where she chose long-term celibacy, and started re-building a relationship with her parents.

Then, after a surprising (and awkward) introduction, Theall fell in love. When she and Jill started their family, she fell in love again with a baby who’d had a rough start in life. They’d hoped to raise their child in Theall’s Catholic faith.

Though it made me very sad, and though I spent a lot of time with my mouth open in astonishment, I just couldn’t stop reading Teaching the Cat to Sit.

That might be because author Michelle Theall is a first-rate storyteller, and she really knows how to keep a reader want-ing more. Half of this book is about her battle with Catholicism and with the Church for recognition of her partner and their son and, eventually, their search for an acceptable (and accepting) religion. That’s fascinating, but there’s more: the other half is the memoir of her tumultuous relationship with her parents and her journey to understanding, both of them and of herself.

Overall, I think I liked this book because of its deliberateness and its ultimately empowering message of truth to self. For that, and for the great biography it is, Teaching the Cat to Sit is a must-read—especially if you’re in the same boat.