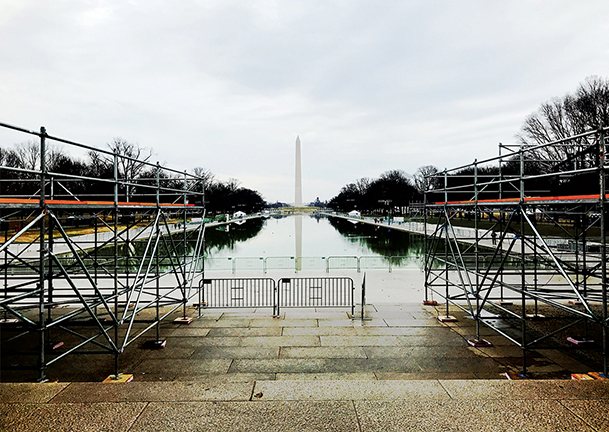 I sat shivering atop the steps of the Lincoln Memorial, wishing I had worn a thick knit hat. Inauguration Day 2009 was cold, yet the low temperature deterred neither me nor the nearly two million others who turned out to witness Barack Obama get sworn in as the 43d president of the United States.

Turning my face towards the warming rays of the sun, I spotted them out of the corner of my eye: a dozen old black ladies, dressed as if going to church, in hats with feathers and coats with fur collars. One woman used a medical walker; a few others relied on canes. Slowly but surely, they began to climb the steps, one at a time, arms linked, going only as fast as the slowest member of the group. The ladies shooed off multiple attempts from friendly people trying to assist them. They didn’t need anyone’s help, for they had each other.

When the group finally made it to the top of the Lincoln Memorial, one elderly woman held up her metal cane and shook it to the heavens. “Never thought I’d live to see the day,” she declared. I overheard another woman say they’d boarded a bus earlier that morning in South Carolina and would return later in the afternoon. Those of us sitting on a ledge joyfully gave up our seats to the women, one of whom thanked me for coming that day.

Despite the fact that so many of us at the Lincoln Memorial were nowhere near the main stage over at the Capitol, nobody cared. We could hear and see it all on jumbo screens. It was enough to just be there in that historic moment. I couldn’t help but feel the sense of optimism and hope that day, as if the country was listening to its better angels.

I still get goosebumps thinking about it.

Fast-forward to 2017 and the inauguration of Donald Trump, an event I felt compelled to witness despite so many misgivings. Nobody would accompany me, so I went by myself. As luck would have it, I fell in with the Pot Parade—a couple hundred advocates for legalizing marijuana—and that was fun for awhile, marching along the mostly empty streets of Washington to the beat of reggae tunes and in a cloud of smoke.

I veered off from the pot smokers to enter the National Mall near the Washington Monument, discreetly joining the queue of Trump supporters, stone-faced white men and women in those ubiquitous red “Make America Great Again” baseball caps trying to ignore the protestors outside the temporary fencing. Nobody smiled. Nobody spoke. The only black faces I saw were those working the security checkpoints.

After wandering around the Washington Monument for awhile, I turned up the collar of my raincoat and headed west toward the Lincoln Memorial along empty paths and past rows of unoccupied port-a-johns. I passed more joggers than Trump supporters. A light rain was falling by the time I made it to the Memorial, which I discovered was undergoing renovation. Thus I couldn’t climb the steps.

What I did do, though, was stand at the base of the Memorial and gaze east across the still gray water of the Reflecting Pond. Unlike 2009, there were no video screens, no speakers, and very few people. It was quiet and solemn at this end of the Mall, more like a funeral than an inauguration.  I snapped a few of what I thought were poignant photos and posted them on my Facebook account, which some friends liked and shared. Funny, it didn’t take long for the Trump supporters to register their dissatisfaction. Not true! Fake news! I laughed it off.

My amusement turned sour when later I heard the new Administration claim the day’s crowd was the largest ever at an inauguration. Trump’s people even made up Metro ridership numbers, which Metro authorities later debunked. White House Advisor Kellyanne Conway then explained that the Trump Administration was merely offering its “alternative facts” about the event. Huh? Seriously, what event did these toadies attend? Anyone who was on the Mall in 2009 and 2017 could tell you a helluva lot more people turned up for the Obama inauguration.

If the Trump Administration will blatantly lie about something like crowd size, what else will they lie about?  Look, I’m not naïve; I know very well all politicians spin things. But this new crowd in the White House seem more like propagandists who want to censor what they don’t like and spread their own information whether or not its true in order to mislead the public and present their Fuehrer President in the most positive light.

Is there any wonder why we’re seeing a renewed interest in dystopian novels such as George Orwell’s 1984 about a totalitarian government that distorts the truth, Sinclair Lewis’ It Can’t Happen Here telling the story of the rise of populist President Buzz Windrip who becomes a dictator to restore the United States to prosperity and greatness, and Ray Bradbury’s Fahrenheit 451 depicting a society where propaganda is good and books are bad. Sales of 1984 increased by 9,500 percent after Trump’s inauguration! Penguin, the book’s publisher, announced plans to reprint 75,000 copies.

Perhaps I’m feeling a bit melodramatic these days, but it feels to me the dark angels have seized control of our government. And when they trumpet their battle against facts, the media, and anyone who doesn’t buy into their vision for the country, well, it gives me serious goosebumps...the bad kind!

Rich Barnett is the author of The Discreet Charms of a Bourgeois Beach Town, and Fun with Dick and James. More from Rich Barnett