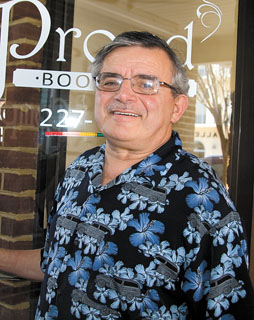 Every equal-rights movement has its pioneers. For the LGBT community, it’s Harvey Milk, Ellen DeGeneres, Greg Louganis, Kevin Mossier (founder of RSVP Cruises), Rosie O’Donnell, Deacon MacCubbin (founder of Lambda Rising), Elton John and countless others who put themselves “out there” in the path of potential insult born of bigotry or just plain ignorance. Rehoboth Beach is no different. Names like Steve Elkins and Murray Archibald (creators of CAMP Rehoboth and this publication) come to mind, in addition to the men and women who brave the lingering remnants of prejudice to operate gay bars and gay-friendly businesses. The list could go on and on.

Our pioneering days are not over. After Lambda Rising closed its doors in 2009, Rehoboth Beach resident (and grandfather nine times over) Jocques LeClair knew that a LGBT-oriented bookstore was, in his words, “too valuable to the gay community” to let the concept die. And so he created Proud Bookstore.

Jocques was one of those kids whose birthday was positioned in such a way that he was the youngest—and smallest—in his class. He claims, “I didn’t do puberty ‘til college!” If his diminutive stature didn’t attract attention, it would surely be the fact that, even as a high-schooler, he loved to cultivate and arrange flowers. At one point, he had over 10,000 gladiolas growing in and around his childhood home. (Rumors of a gigantic bonfire after he left for college are absolutely true.)

Jocques dreamed of owning his own retail florist long before he majored in horticulture at SUNY at Morrisville. Needless to say, after having already won a blue ribbon from the New York State Gladiola Society, he was a bit of a ringer. When his studies required that he operate an actual flower shop, he recognized that his skill exceeded even that of his teachers. He left school and began working professionally in Oneida, New York.

In 1972, Jocques got married and had five children. He and his wife lived between Oneida and Gettysburg, PA, near his wife’s family. He worked for several flower shops, managing the wedding department for what was then the 5th largest FTD florist in the business. The commute between New York and Pennsylvania was stressful and time consuming, and he knew it was time to take the plunge and open his own place. “The Flower Boutique” became a fixture in downtown Gettysburg, and after five years LeClair sold the business, staying on to guide the new owner for the next ten years.

Jocques’ marriage was not going well, and it was during that time that he began to act on his attraction to men. After a particularly unpleasant incident involving his wife, a nosy mail carrier and postcards from a boyfriend, the couple divorced in the late ‘70s. He and his boyfriend eventually moved to Rehoboth Beach, and Jocques put his talents to work at South Pacific Florist and Windsor’s Flowers. The highly charged sexual atmosphere of the ‘80s didn’t do his relationship any good, and one fateful night at the Renegade (how many of us don’t have our Renegade stories!) he discovered that his boyfriend wasn’t quite cut out for monogamy. Jocques took the car keys, changed the locks and the next morning his (former) partner found all his possessions in the driveway. So much for that, thank you very much.

The now-single Jocques made regular flower deliveries to the Seahorse Family Restaurant and the Top of the Henlopen restaurant (both long-gone) where a matchmaking hostess introduced him to bartender Tom Gile. That was 13 years ago, and Tom and Jocques have been together ever since. (An entrepreneur in his own right, Tom and business partner Joe Mack own and operate “Double Dippers,” that tasty little ice cream place on First St.)

In 2004, LeClair accepted a part-time job at Lambda Rising Bookstore on Baltimore Ave. He stayed for five years, serving as manager for the last three. The owner ignored his repeated efforts to buy the business, electing to close it permanently on New Year’s Eve, 2009. For many, it was the end of an era. “It should never have closed,” says Jocques. “For young people who knew they were gay but had no place to go, it was a safe place that wasn’t a bar.” So the former florist and bookstore manager put up his own money and opened Proud Bookstore.

Jocques makes sure that the primary focus of the business is on current LGBT-oriented literature and authors. He reviews every book to verify that it’s up-to-date and in-sync with today’s attitudes and trends. He even holds book-signings for new releases. “There’s so much stuff out there that’s outdated,” he says. “What I’m selling must be relevant to modern gay and lesbian life, but still diversified enough to serve the bisexual and transgendered segments of the community.”

The flower industry’s loss is the LGBT community’s gain. Rehoboth Beach resident Jocques LeClair seems pleased with Proud Bookstore’s successful first season. “I feel like I’m doing something that’s needed. I know it’s going to work. And that makes me happy.” And we’re all better for it.

Bob Yesbek is a Rehoboth Beach resident. He can be reached at Bob@RehobothFoodie.com.