It Really Does Get Better 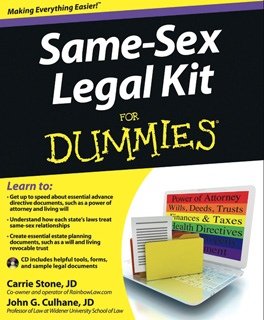 You know your rights.

But kidding aside, what are your legal rights? In Same-Sex Legal Kit for Dummies by Carrie Stone, JD and John G. Culhane, JD, you’ll learn some eye-opening rights…and wrongs.

Fifty years ago, needing to know your rights as an LGBT individual would’ve largely been a moot point: there were no rights. Today, you have rights but since they seem to change daily, you might need help understanding them.

Expanding the mess created by DOMA, if a state doesn’t recognize your marriage or civil union, you may (or may not) still need a divorce, should you split with your ex-beloved. Other issues boggle the mind: what if you’re bisexual, and you marry a same-sex partner in a right-to-marry state? Could you—without divorce—legally marry an opposite-sex partner in a state that doesn’t recognize your first wedding?

Once you’ve untangled partnership legalities, it’s natural that you’d want to create a family. There are several ways to bring children into your household, and the authors have advice on protecting the rights of all concerned. You’ll also get tips on dealing with bullying, schools, and nosy neighbors.

Know where to seek help to combat discrimination. Know what to do if you’re refused housing based on your sexual orientation. Learn how to mesh finances, protect joint assets, and buy a house with a partner. Find out how to ensure your rights on medical issues. And, though you hope you never need it, learn the right way to dissolve your “legal LGBT relationship.”

And now you know why you need Same-Sex Legal Kit for Dummies.

Yes, it’s all complicated, but authors Carrie Stone, JD and John G. Culhane, JD attempt to make it just a little less so by giving readers a broad overview of the important issues, starting with marriage.

Since that’s not the only LGBT issue in the courts, however, Stone and Culhane also cover wills and trusts, health directives, power-of-attorney issues, immigration, and many issues relating to LGBT families and children. Also helpful are a CD that includes forms and sample documents, and a section called “The Part of Tens,” in which you’ll get tips on things that are not necessarily legalities, but are useful nonetheless.

Overall, this is a handy book, and a good start for those times when something’s amiss, legal-wise. True, it’s not a replacement for an actual lawyer, but if you think having Same-Sex Legal Kit for Dummies would be good to have around, you know you’re right.