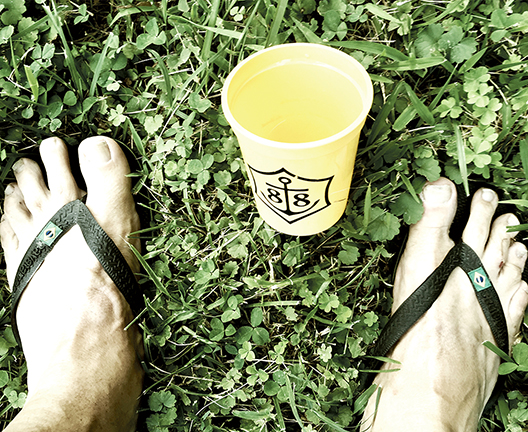 Foot wear is more stylish this summer in Rehoboth. That’s the word from the deck at Aqua according to one trendy tippler with an eye for style. Looking around during happy hour one Saturday, I have to agree. I saw a diverse mix of French espadrilles, sporty Norwegian boat shoes, Birkenstocks, loafers, neon track shoes, and, of course, lots of leather thong sandals. But no flip-flops.

Rich, you might be wondering, aren’t thong sandals the same as flip-flops? Isn’t it just a matter of semantics? Yes and no. While the basic design of the Reef, Rainbow, and Volcom thongs might be the same as a flip-flop, those companies don’t market them as such. To me, a flip-flop is constructed using a simple plastic or rubber sole with a corresponding Y-shaped plastic or rubber thong that slips between your toes. A proper flip flop also makes the slapping “flip-flop” sound of summer when you walk. It should cost about the same as two call brand cocktails and no more.

The last time I looked everyone was wearing flip-flops—to restaurants and bars, on city sidewalks and on sandy beaches. Curiosity piqued, I wandered the bar, head down, cocktail in hand, looking for flip-flops. A couple of people eyed me strangely when I explained my mission. One lewd gentleman licked his lips. Not that kind of flip-flop, I gently admonished him. This was research.

Simple in design, cheap, and accessible, flip-flops are worn around the world. These “slabs of rubber,” as style guru Tim Gunn calls them, are ancient in origin. Anthropologists in Oregon have uncovered 10,000-year old flip-flops made from bark. The British Museum has papyrus flip-flops from Egypt, circa 1500 BC. The classic rubber flip-flop we know today was manufactured first in Japan for export in the 1950s. It was a version of the traditional Japanese zõri sandal that had gained some popularity among American soldiers. The flip-flop caught on in California and slowly but surely became an essential part of beach culture where it existed rather quietly until the late 1990s when a couple of forces came together to create a fashion phenomenon.

The first was the “Casual Friday” movement associated with the Dotcom boom. Kick off those lace-ups. The second was the remarkable transformation of two brands. Havainas in Brazil and Abercrombie & Fitch in the USA. Havaianas launched a colorful new product line and turned to celebrity endorsements to change the perception of its rubber flip-flops from a poor-person’s shoe to a stylish fashion accessory. Abercrombie & Fitch used muscular shirtless teenage boys and their scantily-clad female admirers to turn a boring sporting goods company into a fashion powerhouse selling expensive hoodies, cargo shorts, and flip-flops to affluent kids (and adults). Toes aplenty! It didn’t take long for flip-flops to show up on the runways of Paris as a sexy and irreverent counterpoint to high fashion.

So what flipped? Why aren’t people wearing slabs of rubber anymore?

What I’ve been able to surmise is that as the humble flip-flop moved from fashion trend to wardrobe staple there’s been a proliferation of flip-flop products and styles, tending towards more expensive and sturdier types made with more upscale materials. One older gentleman I spoke with during my research at Aqua said his J Crew flip flops hurt his feet after awhile so he upgraded to Reef sandals, which have more arch support. The health angle has been getting a lot of play. Even Cosmopolitan warns its readers about bacterial infections, hammer toes, bunions, and tendonitis that can come about by excessive wearing of flip-flops. The toenail fungus epidemic might be at play here. Nobody wants to show off ugly feet.

A stylish younger guy told me that when his grandmother in Ohio started wearing flip-flops he knew it was time to toss ‘em in the trash. The flop of Abercrombie & Fitch might be a contributing factor. And I can’t help but wonder if the frivolous piece of footwear might be linked to the whole well-manicured Metrosexual movement that seems to have quietly gone by the wayside. When’s the last time you heard that term? Hipsters and lumbersexuals don’t wear flip-flops. Lax-bros don’t wear rubber flip flops either, opting instead for more masculine leather and hemp models.

Personally, I will be bereft if I have to relegate my Havaianas to the back of the closet with my Velcro strap Tevas and camouflage Crocs just because they’ve become unfashionable. Seriously, though, what’s a 50-something gay man who fancies himself a bit of a rake to wear when he goes out cocktailing? Maus & Hoffman slippers are just too precious. Topsiders? Never liked ‘em the first go ‘round. Loafers are boring, and espadrilles make me feel like a big girl. Where’s my Papagallo purse? White bucks are tempting, but perhaps a tad too Southern. Besides, Tom Wolfe would never deem to pen a column on something as mundane as the flip-flop.