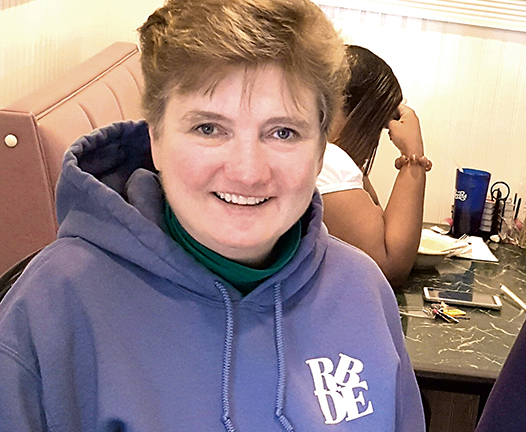 American political satirist and journalist P.J. O'Rourke once said, “To mistrust science and deny the validity of scientific method is to resign your job as a human. You'd better go look for work as a plant or wild animal.” This is very apropos when considering the life, education, and career of Leslie Ledogar.

Leslie was born in Albuquerque, NM; this was step one of the childhood and adolescence of a “corporate brat.” Her father worked for AT&T as a patent and labor law attorney and was transferred numerous times. Asked where she was raised, Leslie laughs, “New Mexico, Long Island, Illinois, and where ever. I was always the new kid in school.” But this was not a problem, because her parents made change into an advantage; travel was a virtue. The family traveled all over the world as often as possible. She describes trips to Spain, Portugal, Germany, and the USSR. Leslie attributes this early learning to her developing the capacity to adapt to changing conditions quickly.

Her family came to rest long enough for her to attend Page High School in Greensboro, North Carolina. Following high school, she went on to Duke University to study history. The dominant scholarship was the use of the historical method. The historical method comprises the techniques and guidelines by which historians use primary sources and other evidence to research and then to write history. The method incorporates the political picture which intrinsically embraces the dominant groups. Leslie found this unsatisfying because whole elements of change and development were ignored. She left Duke and history after two years.

Research methods led Leslie to the University of North Carolina and a biology concentration. She had found that the application of the scientific method led to more congruous analysis of mysteries. An abiding concern for the environment steered her to graduate school in Forestry. This ushered in a career in timberland management, conservation, and farming. As a consultant to private timberland owners, she worked all over the south and discovered how much she loved plants. She became recognized for her timberland appraisal skills which took her to New Zealand as well as throughout North America. But in 1989, Hurricane Hugo dealt a major blow to forestry in the south and encouraged Leslie to take a step back.

In her multiple excursions, Leslie became intrigued with the unique ways of celebration in the American south: parades, banners, marching bands, costumes, and fireworks. Fireworks were ubiquitous and trotted out for every celebration. Ever concerned for safety and the environment, Leslie began to examine the fireworks industry. Fascinated, she learned and practiced increasingly more complex fireworks choreography and percussion to music for city-wide celebrations. Again, she applied the scientific method to her designs in order to embrace aesthetics and environmental safety. Experiencing the need for more challenges, Leslie decided to go to law school.

Who was your inspiration? “Well, you know my dad was a lawyer but really it was my mom.” Leslie describes her mother’s approach to life. The virtue of travel made sense out of constant moving. But overall, it was her mother’s return to school to earn her Ph.D. that was most inspiring. Dr. Judith Ledogar’s dissertation, “Dress and Nudity in the Iconography of the Florentine Renaissance Woman” embraced all of the aspects that Leslie knew were necessary.

Temple Law School in Philadelphia was Leslie’s choice because of its location and its interest in the mature student. She describes in depth the interconnectedness and influence of the age groups, diversity, and culture of the students. After several years in private practice, Leslie moved to the New Jersey Department of Environmental Protection.

In the Office of Legal Affairs, Leslie served as in-house counsel on teams of scientists and organizational managers. The job was to amend and formulate regulations so that they best served the environment, public safety, and the economy. Leslie was known for her ability to bring together all of the stake-holders to construct regulations to serve the highest and best use in the correction of catastrophes.

Leslie began visiting Rehoboth in 2001. She and her partner bought a summer home soon thereafter. But after retirement, they needed more amenities, namely a garage. Chipping ice off windshields in the mornings no longer appealed. A house near Love Creek became home. Close to everything but far enough away for quiet.

When asked what she hopes will be her legacy, Leslie barely pauses. “The environmental regulations that I shepherded into effect will stand after I’m gone because they represent disparate groups’ best efforts.”

And why does she want to run for County Council? She has skill and experience working with discordant factions and creating compromise. And from my prospective, that is sorely needed in politics today.