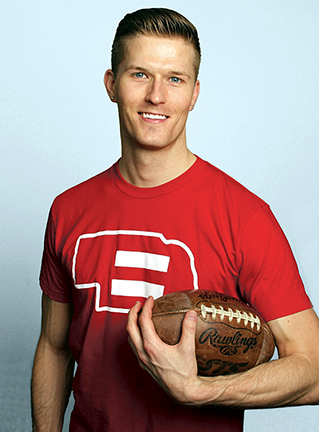 Most sports fans have heard of Michael Sam. In 2014, the University of Missouri defensive end became the first openly gay Division I football player.

A decade before, Eric Lueshen was out to his University of Nebraska teammates. (No disrespect to Mizzou, but the Cornhuskers are one of college football’s truly legendary programs.) Lueshen’s experience was largely positive–and almost entirely media-free.

Now he’s happy to talk to the press. But the story he tells is not all about him. Lueshen wants to discuss his passion: making sports safe for everyone.

The organization he co-founded—LGBT SportSafe—is an important addition to the athletic world. Yet to understand it, you first must know where it came from.

Lueshen calls Pierce, Nebraska—his hometown—“a tiny, conservative farm community.” He had several identities: nerd, band geek, jock (football, track, basketball, baseball, and soccer). And gay. (“I was pegged that way even before I knew what gay was,” he says.)

He came out in the 11th grade. His relationship with his father was “tumultuous,” though today they are close. Lueshen overcame small-town homophobia, and was recruited as a kicker by Nebraska.

Entering college, he says, “I wasn’t going to jump back in the closet. But I’m not the type of person to parade with rainbows either.”

However, after his very first team meeting as a freshman, a dozen players made anti-gay comments. Lueshen realized “this might be harder than I ever imagined.”

He knew that his sexuality was only a small part of his identify. He was proud of his strong values, and figured they would allow him to be authentic. Fortunately, he lived on a floor with several popular freshman players. When they asked two months later if he was gay—and the word soon spread—their easy acceptance helped pave the way for most teammates to do the same.

That other homophobic group persisted, though. A physical confrontation between the 195-pound kicker and a 350-pound lineman left Lueshen shaken.

That was then. A year later, at a house party, the “biggest homophobe” welcomed him with a smile (and a bottle of Crown Royal). Lueshen was wary, but the teammate told him, “At first I didn’t know how to be around you. But you’re cool, you’re funny, and you’re fun.”

Then he said that if Lueshen ever had a problem, “these guys”—a group of enormous football players—would take care of it.

Lueshen’s career was checkered. A torn hamstring cost him a starting spot. In 2006, back surgery ended his playing days forever.

Losing football was tough. He withdrew from teammates. Lueshen poured his energy into a Ph.D. program for biomedical engineering. Helping people, he realized, was his calling.

Three months before earning his doctorate, Michael Sam came out. As a consensus All-American, this was big news. Lueshen was one of thousands to post congratulations on Facebook. He added a few lines about his own experiences at Nebraska.

Suddenly, the media wanted to hear his story too.

Hours after appearing on a Lincoln sports radio talk show, Lueshen told his Ph.D. supervisor that he would postpone graduation by a year. “All this is happening for a reason,” Lueshen felt. “I have to honor this.”

He gave speeches and interviews. He advised athletic departments on diversity and inclusion. He served as grand marshal of Nebraska Pride.

Along the way, he was mentored by LGBT sports pioneers like Pat Griffin and Helen Carroll. Then, at a Nike LGBT Sports Summit in Portland, he met Nevin Caple. The former football player and the LGBT sports diversity consultant clicked professionally.

Two years ago, Caple called Lueshen. Would he be interested in working on a program to help create safe sports environments for everyone, regardless of sexuality or gender expression?

The founders stayed true to their athletic roots, forming a “three-peat model.” The three “P”s were Policy (helping ensure that all members of an athletic community are valued and respected); Programming (LGBT inclusion training for athletic administrators, coaches, and recreational sports leaders), and Public Awareness (about LGBT experiences).

LGBT SportSafe launched last year. The America East conference was the first organization to jump on board. A major event was a presentation at the National Association of Collegiate Directors of Athletics in Dallas. Dozens of universities followed up, asking how they could be part of LGBT SportSafe.

One way is by earning a medallion from the organization. LGBT SportSafe awards gold, silver, and bronze designations, depending on how well an athletic department performs based on inclusion criteria. It’s a great way to tap into the competitive juices of ADs and coaches.

No one knows competition better than Eric Lueshen. After all, he beat Michael Sam out of the closet by a full decade.