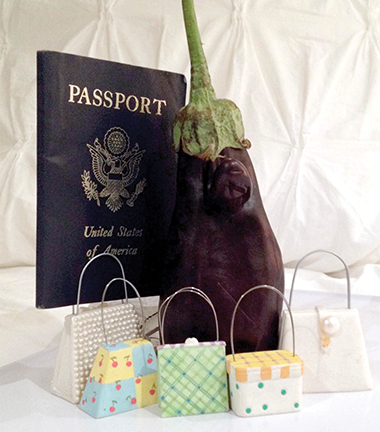 I have a friend who sends me photos of eggplants in some rather unusual circumstances. This same friend’s text messages are often peppered with purple eggplant emojis. But it’s not what you think. Miss April is a respectable gal from Manhattan’s Upper East Side. She’d never stoop to sophomoric stunts. Her eggplant pics are dignified and very girly. For whatever reason, she finds humor in styling the humble aubergine.

That said she’s clearly an outlier because the eggplant today is everyone’s favorite phallic symbol. It’s not hard to see why. A bulging purple eggplant is much more sexually suggestive than a yellow banana. But, how did it happen? How did the eggplant ever make the leap from staid supermarket vegetable to sexual innuendo?

The story begins in Japan in the 1990s when pagers and mobile email were just taking off. A man named Shigetaka Kurita was working for a company looking to distinguish its pager service by finding a way to help Japanese users convey mood, context, and emotion in the new world of digital communications. He was inspired by Japanese comic books, weather forecast symbols, and Olympic sports pictograms from the 1964 Tokyo Olympic Games. In 1998, he created 176 pixelated images, which became the first emojis (a new mashed up word meaning “picture word”). There was a heart, a baseball, a martini glass, a mug of beer, a hamburger, a high heel, and a golf club. But, alas, no eggplant…

The picture words were so popular that other Japanese telecoms adopted them, as did platforms like AOL Instant Messenger and My Space. Fast forward to 2007 when Apple released the iPhone and launched the global smartphone boom. Apple marketers provided emojis originally only on iPhones for the lucrative Japanese market until American hackers figured out how to access them. In 2009, Google added emojis to Gmail. Two years later, Apple finally officially added emojis to all its iPhones. 2011, incidentally, was the same year the eggplant was approved and added to the official Unicode emoji set. Seems the Japanese consider it good luck to dream of an aubergine, especially early in the New Year.

It didn’t take long for the fellas to grab hold of the eggplant emoji and add it to their sexting repertoire. This coincided with popular hip-hop celebrities using the eggplant reference to brag about their sexual endowments on social media. The eggplant went viral. Go ahead and google “eggplant Friday” and you’ll see what I mean.

Someone actually did a study of the prevalence of phallic emoji and found that in the United States the eggplant is used about twice as much as the banana. The social media site Instagram even went so far as to ban the use of the eggplant emoji because it was too often linked with photos or videos that violated the site’s nudity policy. And get this, there’s even a vibrator shaped like an eggplant. Who knew the eggplant was so sexy? The Millennials, that’s who. And for the younger generation the eggplant is where it’s at—new and fresh, and definitely not your dad’s banana. But do they ever just eat them?

An official nonprofit organization called the Unicode Consortium regulates what new emoji are added to the public space and what they look like. In the last go around it added some new phallic emojis: the hot dog, carrot, pickle, and burrito, bottle with popping cork, baguette, and a shrimp. Naturally, the big question on everyone’s mind has got to be whether the eggplant will have staying power? Or is its fame about to wane?