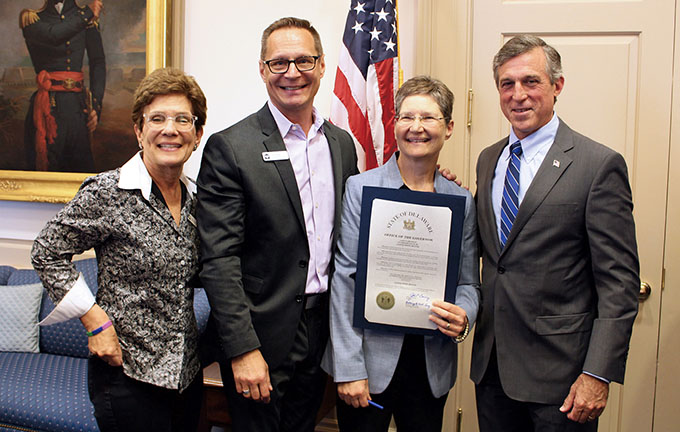 June is Officially Pride Month in the First State

It’s official: Governor John Carney signed a Pride Proclamation at Legislative Hall in Dover to recognize June as LGBTQ Pride Month in Delaware on Tuesday, June 11. A wide variety of businesses and organizations from the entire state were present for the signing in Dover, including CAMP Rehoboth. Photo: CAMP Rehoboth Board Vice President Leslie Sinclair, Board President, Chris Beagle, Founding President of Equality Delaware Lisa Goodman, and Governor Carney. Photo credit: Office of the Governor. ▼ 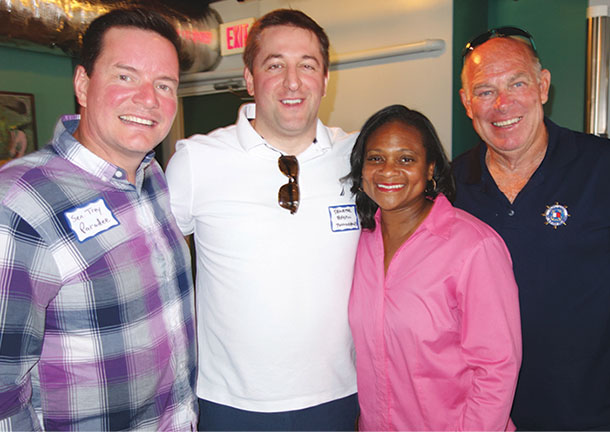 The Delaware Stonewall annual summer event is important to anyone with an interest in LGBTQ issues and politics in the State of Delaware. Once again held at Mariachi Restaurant in downtown Rehoboth Beach, this summer’s party was attended by almost every one of the elected democrats in the state. Photo: Delaware State Senator Trey Paradee, Delaware State Senator Bryan Townsend, Delaware State Representative Sherry Dorsey Walker, and Delaware Speaker of the House Pete Schwartzkopf.▼ 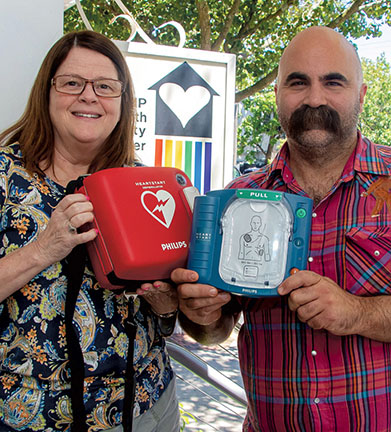 Inspired by a friend’s heart attack, Andrew Byrd from Harbor HealthCare and Rehabilitation Center in Lewes, wanted to make sure that if that happened to someone at CAMP Rehoboth, a defibrillator was nearby. “It could save a life,” says CAMP Rehoboth Health and Wellness Director Sal Seeley, “we are grateful to Andrew and Harbor HealthCare for the donation.” Photo: CAMP Rehoboth staff members Monica Parr and Salvatore Seeley. ▼ 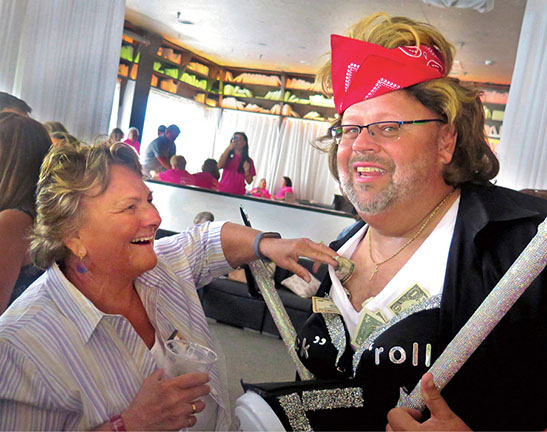 Celeste Beaupre gives a tip to Bryan Hecksher at the 10th Annual Bras for Support Fundraiser at Ivy in Dewey Beach. Presented by the Women’s Council of Realtors of Sussex County, the popular June 12 event raised funds for Delaware Breast Cancer Coalition (DBCC) and Beebe Medical Foundation. A good time was had by all and at the end of the night, the bras were the first thing to come off. ▼ 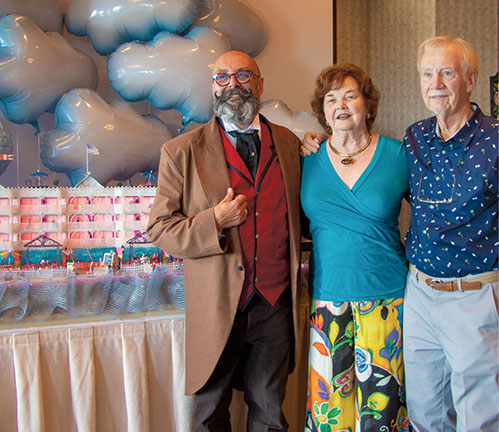 “I’m always up for a project,” Timothy Credle explains when asked about the fully-lit model of the Boardwalk Plaza Hotel he built for the hotel’s owner, Ruth Ann Zerby. “She saw the model of Bad Hair Day? I had done,” he says, “and approached me about creating one for the hotel. A year later, here we are!” Photo: Artist Timothy Credle and Boardwalk Plaza owners Ruth Ann and Jeff Zerby. ▼ 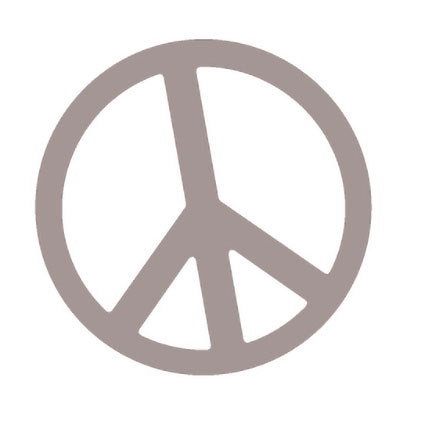 Make peace and break a fundraising record. Get your groove on to the sounds of DJ Mike Reimer one last time while raising money for CAMP Rehoboth. $20 suggested donation at the door or online at camprehoboth.com. July 5, 2019, 6 Futcher Drive, 12-6 p.m. Check it out on Facebook: facebook.com/rehobothboys.▼ 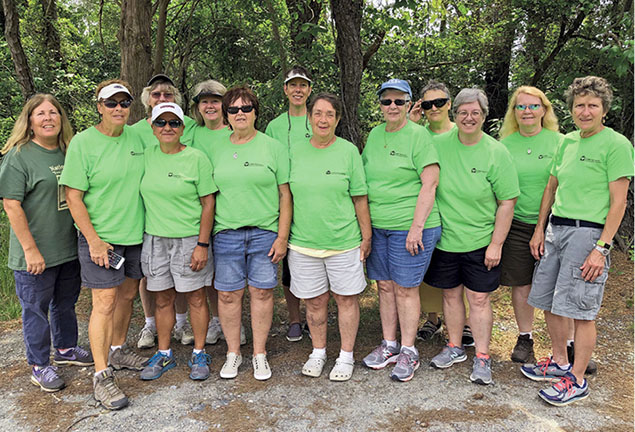 CAMP Rehoboth Outreach Program (CROP) volunteers cleaned up the beaches at Cape Henlopen State Park for the 9th year in a row on Saturday, June 1. A lunch for volunteers was provided by the Village Improvement Association. The Friends of Cape Henlopen State Park were very appreciative of CROP’s efforts to maintain the beautiful Delaware beaches. The day was also marked by one of the largest number of volunteers for a CROP event. To find out about upcoming CAMP Rehoboth volunteer opportunities, visit camprehoboth.com/volunteers. ▼ 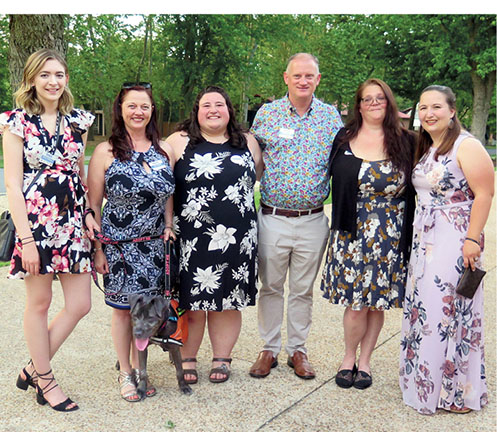 BYOD (Bring-Your-Own-Dog) All for a Good Cause

When I was 16 years old, I made my first trip to Israel to live on Kibbutz Enat near Tel Aviv. There I met my first gay boyfriend, Meir Germanovich, a gifted dancer and potter, who introduced me to a world I had not known growing up in Bakersfield, California. Through his eyes I have traveled the long road of struggle as a leader of the LBGTQ Community in Israel. Meir and I are still close friends. I recently returned to Israel to celebrate the news that the Municipality of Tel Aviv recognizes his marriage to Avi and has granted them the civil monetary rights of a married couple, although the Israeli government still refuses to do so.

Back in Bakersfield a few years later, my closest friend from high school came out to me, and he and his husband are family to me. My life has been spent nurturing the relationships of those I love who are gay and lesbian, as well as transgender and queer.

One of the things I love best about Rehoboth is its open culture and welcoming of LBGTQ community, especially in the faith communities. Seaside Jewish Community has had a long history of opening its doors to everyone who wishes to be part of our family, regardless of their orientations and faith backgrounds. We are here for those who wish to connect with their Jewish roots and find their own sense of spirituality and truth.

I want to extend an invitation to everyone reading this reflection to stop by and experience the warmth of Seaside. May our rainbow of love continue to be spread over us as a shelter of peace for all who seek friendship and meaning in their lives.

Email your letters to the editor.