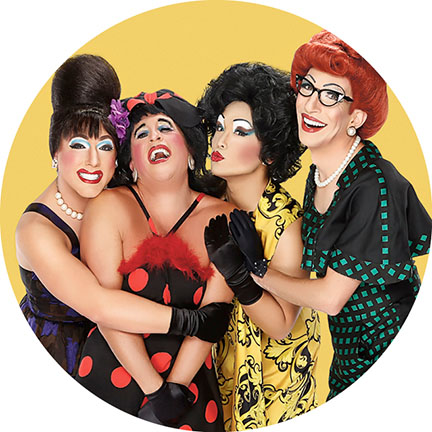 There’ll Be Ovations and Outrage with the Kinsey Sicks

Between glowing reviews in the likes of the New York Times and Washington Post, performances at New York’s Studio 54, an off-Broadway run, nine CDs, and an extended engagement in Las Vegas, the Kinsey Sicks are heading to the Rehoboth Beach Convention Center. It may never be the same.

The Kinsey Sicks’ award-winning a cappella singing, sharp satire, and over-the-top drag have earned them a diverse and devoted following. The four outrageous drag performers always have something entertaining, hilarious, and pointedly political to say.

The show they will be performing here will be the last time its cast performs Things You Shouldn’t Say, as group founder and mastermind writer Ben Shatz will be retiring from performing. He will continue to write for the group.

Cast member Trampolina (Spencer Brown) tells Letters, “This show marks a milestone. Our founding member of 26-plus years, Rachel (Ben Shatz), will do her final show before slipping away into retirement, where she will continue to write and terrorize audiences from the comfort of her couch.”

Shatz, as an undergraduate at Harvard College, was torn between pursuing a career as a gay activist and a career in theater. Eventually he decided that activism was more important and that he didn’t have the talent to be a performer.

He went on to attend Harvard Law School and, upon graduation, started the first national AIDS legal program, served as Executive Director of the Gay and Lesbian Medical Association, and was appointed to President Clinton’s Advisory Council on HIV/AIDS.

But he discovered that “making people laugh is much more fun than suing them, and no less effective in making them think.” So, in 1993, the Kinsey Sicks took flight.

The story goes that the four friends went to a Bette Midler concert dressed as the Andrews Sisters. They assumed there would be lots of folks in drag, but it turned out they were the only ones (“Except Bette, of course,” says Rachel). That night, they were asked to perform at an upcoming event, so they began to sing and harmonize, and the rest is entertainment history.

Over 25 years ago the group got going in an effort to find joy during the darkest days of the AIDS crisis. Now, Ben Shatz says, they are responding to the era of Trumpism, “fighting hatred and deceit with humor and heart.”

Joining Shatz on stage for the Rehoboth performance will be Brown as Trampolina, Nathan Marken as Winnie, and Jeff Manabot as Trixie.

Trampolina tells us “We couldn’t be more thrilled to be returning to Rehoboth Beach! It’s been so long. We expect a whole lot of people with questionable taste and discretionary income to buy tickets to see us.”

But the endorsement comes with a caveat. Trampolina says “This is one of our most critically-acclaimed shows yet, so a word of warning to the suspicious theatergoer: if you love Donald Trump, you’ll HATE this show!”

So be warned: It’s going to be outrageous and tickets are going fast. ▼

Got Your Tix for the Sicks, Yet?

The a cappella group the Kinsey Sicks will be on stage for one show only at the Rehoboth Beach Convention Center at 8 p.m. on Saturday night, July 20.

Tickets are available now starting at $35 at camprehoboth.com. It’s the first show in recent memory at CAMP Rehoboth to carry the following warning: Views expressed in the show do not necessarily reflect those of CAMP Rehoboth, the Board, or the staff.

If you get into—and then back out of—downtown Rehoboth by 10 a.m., you won’t have to pay the meters to park. Sooooo….

Registration is encouraged on Eventbrite due to space constraints. Please register by MONTH; it’s possible to register for both July and August at once. Interested people may also show up at CAMP Rehoboth and join in on a space-available basis.