We wait for those lines that breathe,
Lines with a life of their own, to find our place
In a callous universe. We wait for poetry.

The author of these words is the nationally known poet, Irene Fick, of Lewes. This much-acclaimed painter of words has authored two collections of poetry, and has had her poems published in several anthologies, as well as in many journals based across the country. But she got a late start on this second career.

Prior to her 2007 retirement, Irene worked as a journalist; she wrote about healthcare, theology, and education, and even co-authored a book on ethics in cancer care. So, how does a lifetime writer of non-poetic works become a poet? 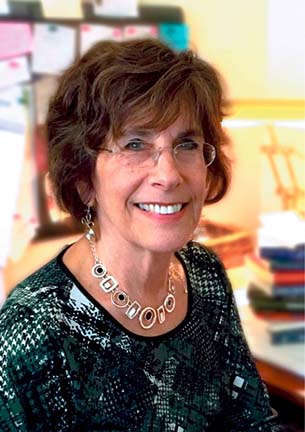 Like many poets, Irene began writing poems in childhood, only to find herself drifting away from poetry in order to support herself as an adult. Then her writing life came full circle, as she took up the craft seriously after retirement.

In fact, she has received first-place honors in several competitions, including honors from the National Federation of Press Women and the Delaware Press Association. She is a nominee for a Pushcart Prize, named among the most influential projects in the history of American publishing by Publishers Weekly.

But why poetry? Irene laughingly claims her “short attention span” serves the poet’s mission well. But then she becomes serious, talking about loving language, and “finding the right word” to bring out her inner voice and connect with people.

The form fits her; poetry gives her many creative options and allows her to take personal risks, especially exploring her complicated family past. She quotes George Bernard Shaw: “If you cannot get rid of the family skeleton, you may as well make it dance.”

In addition to her poetry, Irene also has a long relationship with CAMP Rehoboth. She sings with the CAMP Rehoboth Chorus, has written essays for Letters, served on several committees, and worked with the Music & Memory Project.

Irene describes herself as very intuitive with a vivid imagination, gregarious, but with boundaries. So, is her creative process internal or external?

“Both”, she insists. For connecting on a deeper level, she needs to address her dark side, digging deeper into herself. Yet she is also active in two writers’ organizations (the Rehoboth Beach Writers’ Guild and Coastal Writers), where she leads poetry FreeWrites! and participates in readings, workshops, and critiques. She insists there’s “lots of growing still to do.” She also leans on her husband, Ed. They are “each other’s groupie!”. She goes to his band gigs (he’s an oboist); he goes to her readings.

To aspiring poets, Irene says: read, attend classes, write, join writers’ groups. Learn from others, but “remember, every voice is different…own yours.”

We were sun worshippers, grilling
baby-oiled flesh in lace bikinis all day
long, our bellies taut, thighs not yet
puckered. We lolled on rubber rafts,
cradled and sipped rum potions
topped with fruit and tiny umbrellas.
The steel drum band on shore played
Yellow Bird over and over. We giggled
about Jaws, made low rumbling sounds,
as if to dare any menace, land or sea,
to disturb our budding power. Later,
we emerged from turquoise waters,
strolled to our blankets, tucked
into velvet white sand, and we lit
more cigarettes, downed more rum,
arranged our bodies to capture
the final rays of the afternoon. How safe
we felt under the sun’s divine embrace,
crowned by its wide and tender halo.
We were all goddesses and nothing
could ever hurt us.

Irene Fick’s poem, Gulf Coast 1977, was originally published (under another name) in Rehoboth Reimagined. It later appeared in The Wild Side of the Window (Main Street Rag Publishing Company, 2018), her second collection of poetry. The book received the national first place award in the poetry chapbook category from both the National Federation of Press Women and the Delaware Press Association.