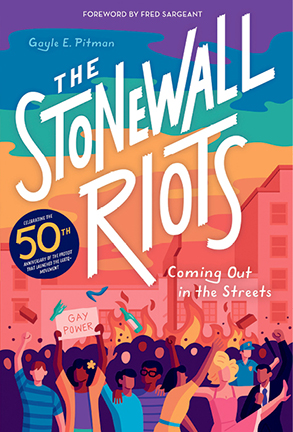 To anybody else, that tchotchke would be worthless.

To you, though, it oozes with memories, and that’s why you keep it: because it represents special people, remarkable times, or things you hold in your heart. One glance, and you instantly recall something you want to remember, so in The Stonewall Riots by Gayle E. Pitman, take a look at 50 objects that represent LGBTQ history.

Ancient statues and classic paintings can tell you a lot about what people did long ago, and what they thought or liked. The same goes with items that are modern, although some accounts get “complicated—especially if that story differs depending on who tells it,” says Pitman. That’s what happened in at least part of the tale of gay liberation: few records were kept, newspapers were mostly silent, and key players have died. Even so, she says, there are enough objects to tell a story.

She begins with a basic history of Greenwich Village in New York City, and the Jefferson Livery Stable, which housed horses long before it became Bonnie’s Stonewall Inn, and then just the Stonewall Inn. There’s a possibility, says Pitman, that the word “Stonewall” might have been “a coded welcome message to lesbians.”

Back then, being gay or lesbian meant almost certain persecution. But a gay man named Harry Hay and three of his friends knew that the best way to work against discrimination was to organize. They started the Mattachine Society in 1950, and Pitman includes a photo of one of their early meetings. Five years later, Del Martin and Phyllis Lyon started the Daughters of Bilitis, an organization for lesbians.

And yet, the discrimination continued and “in 1966, resistance was in the air.” African Americans had been fighting for civil rights for “quite some time,” and antiwar protests were just starting to organize. Small uprisings had been staged on behalf of LGBTQ people in California, while in New York, LGBTQ individuals were getting pretty tired of police harassment, mafia shake-downs, and raids on their hangouts.

Do 10-year-olds have difficulty grasping happenings in their great-grandparents’ day? It may seem so, which is why parents will be glad that The Stonewall Riots is written in the way that it is.

Using photographs, matchbook covers, clothing, and other ephemera, author Gayle E. Pitman makes LGBTQ history into something relatable for its intended audience because, as you know, kids are big on keeping mementos and special objects. Through the stories of selected items, Pitman explains the events surrounding the night of the riot. She draws a few threads between then and now, but she’s careful not to be too hasty in filling in historical blanks. Those unknowns serve to leave kids hanging a bit, and they heighten the excitement and outrage of what happened.

While this is a book for children ages 10 and up, this book is also for anyone under the age of 55. You wouldn’t remember the riots first-hand, so reading The Stonewall Riots is absolutely worthwhile.▼