It’s Not Just for Once in a Blue Moon

It gave me a jolt when I realized that the venerable Blue Moon restaurant in Rehoboth has been in town 38 years and counting. And I’ve been dining there 26 of those years. That’s a lot of marvelous meals. 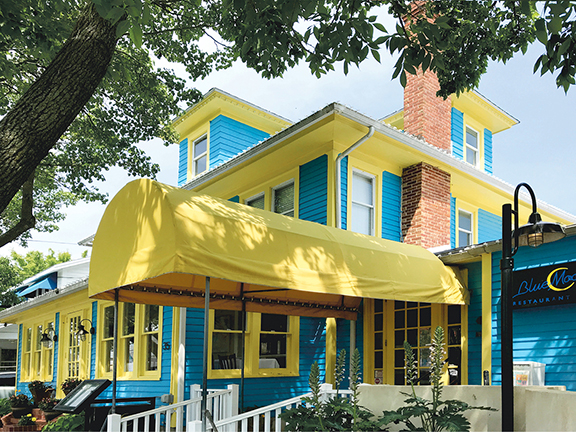 And just as the growth and success of CAMP Rehoboth helped change the culture of coastal Sussex County to a welcoming place for the LGBTQ community, so did the Blue Moon, along with its 1980s companion, the Back Porch. Together, these two restaurants changed the culinary culture at the beach. What used to be mainly a fried fish and French-fry haven became an area noted for award-winning contemporary cuisine.

And it did its part for the LGBTQ culture as well. When the Blue Moon first opened in 1981, along with the rave reviews from the likes of the New York Times, it had to contend with flying bottles and beer cans plus shouted slurs hurled into the bar. But the Blue Moon stood its ground and became a beloved restaurant and go-to venue for the entire diverse community, including Delaware governors, national celebrities, bachelorette parties, and an enormous spectrum of people who love excellent food in a fun, but sophisticated atmosphere.

When restaurant founder Joyce Felton retired, the restaurant came under the ownership of two couples, Lion and Meghan Gardner and Tim Ragan and Randy Haney. Tim and Randy keep the bar and entertainment running full-speed ahead while Lion and Meghan handle the busy restaurant and catering business. Lion is Executive Chef and has been dazzling both diners and restaurant writers at the Moon since 2006.

When Bonnie and I visited on a Thursday evening two weeks ago, it was clear that the restaurant’s food, ambiance, and service were up to its glorious reputation. We sat on the enclosed porch, our favorite spot, enjoying cocktails (classic and generous cosmos) and the amuse-bouche presentation of Gorgonzola stuffed dates wrapped in bacon on shortbread with a dab of peanut butter. Nice touch!

Our server, Charlie, jovial and professional, set the pace—long enough to enjoy the cocktails but available to take our order the instant we looked around. He brought us tempting brioche rolls with a honey-pepper butter, which we nibbled on but carefully avoided finishing lest we ruin what was yet to come.

We sampled the nightly cheese board, with truffle goat’s milk cheese and aged, raw blue cheese, accompanied by pear and apple slices, cucumbers, blackberries, blueberries, and flat bread. Great companion to those cosmos.

My appetizer choice was the Beef Tenderloin Tartare, served with a quail egg atop and house made potato chips. Either you love steak tartare or you don’t. Bonnie loved the chips. I thought the beef with chopped onion, horseradish, and spectacular seasonings was divine.

Next up from the evening’s chef de cuisine, Nelson, came two entrees, equally wonderful and plentiful. We shared the house specialty of Lamb Bolognaise with a hearty tomato sauce over wide, perfectly cooked house-made noodles and the unique Duck Stroganoff with spaetzle. Both entrees were impressive and generous enough for half of each to become our next day’s Blue Moon luncheon.

No review of this legendary eatery would be complete without their famous dessert, which used to be called Second-Word-in-Name-of-Restaurant Pie, a towering ice cream and whipped cream confection completing birthday and anniversary celebrations since 1981. But due to a legal dustup with the giant corporation behind certain round, chocolate lunar pie cookies, served throughout the 20th century at general stores everywhere, the aforementioned dessert has been replaced by the Blue Moon Chocolate Verrine, or Moon Bomb.

Not to worry. The combination of dark chocolate cocoa cream, dulce de leche, and walnut brown butter, with a high hat of meringue, looks very, very familiar. And though it has small and inventive differences, like that touch of raspberry, it’s as fantastic as the original.

The number of dollar signs on Trip Advisor shows $$$$, as with all of our sophisticated restaurants in the area. But we find if you choose carefully you can get the Blue Moon experience by bending but not breaking the bank.

The Blue Moon is open seven days a week for dinner beginning at 5 p.m. There’s a terrific brunch on Sundays. The adjacent bar and lounge has a ton of entertainers, drag shows, summer comics, and the fabulous Pamela Stanley on piano and vocals to offer. Check it out.

And savor everything about this historic Sears Craftsman house on Baltimore Avenue and the restaurant inhabiting it. The Blue Moon remains a touchstone of Rehoboth’s history of change and an agent for its happy culinary and cultural future.▼