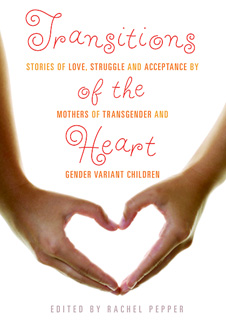 Loving Them for Who They Are

Your child constantly surprises you.

Where did she learn that little habit she has? How did he figure out something you never showed him? What kind of thought-processes go on inside that wise little head?

Almost every day, you learn more and more about your own offspring including, maybe, something you never saw coming, or did you? In the new book Transitions of the Heart, edited by Rachel Pepper, you’ll see how other mothers have coped with their biggest surprise of all.

Unless you’ve experienced it, you can’t understand the feelings of confusion or isolation that come when your son says he’s really a girl, or your daughter swears she’s a boy trapped in the wrong body.

When that happens, you might think you’re alone but that’s not the case, as you’ll see in this book. Other mothers have gone through this with strength and acceptance, and you can, too. The thing to remember is that this is a transition for both of you.

Maybe, like so many moms who tell their stories here, you aren’t really that surprised after all. Everything might make sense now: your daughter isn’t just a tomboy. Your son isn’t “just going through a phase.” More than one mother admits that she knew her child was different when she was firmly corrected on pronouns and clothing choice.

Many women felt relief, and were astonished when they realized that, as their children were allowed to openly express their true genders, they were seeing their sons or daughters happy for the first time. As the stories unfold, it’s especially poignant when this joy has followed suicide attempts.

Still, it’s “a process.” More than one mother has hoped her child might have a change of heart. There are rants in this book, heartbreak, and pain. There are moms who can’t believe this happened…and in some cases, it happened more than once in the same immediate family.

And yet, most of the women in this book admit that they’ve come to respect their children and the difficult things they’ve done. For one mom, he’s “someone I would not have missed knowing for anything in the world.”

And from another, to her child: “…I’ll always love you.”

Sometimes, the “T” in “LGBT” seems to hide behind its fellow letters. Your friends and family might not even know what it stands for, but “Transitions of the Heart” explains in a gentle, celebratory way.

That’s a very useful beacon for anyone who feels isolated as their transgender child begins to embrace who (s)he is. But it’s also important, I think, that editor Rachel Pepper included stories that aren’t so rosy mixed with the stories of acceptance and encouragement. That added a stronger, more authentic message to this book and quashed the Pollyanna-ish tone that it might’ve had otherwise.

Though this book is for mothers, I think it would be helpful for Dads to read, too. If you’re journeying with your child on a trip you never imagined you’d take, Transitions of the Heart may be surprisingly helpful.