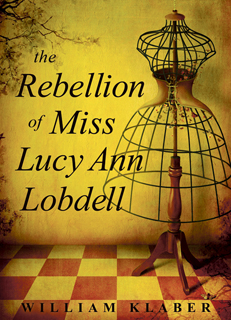 In your lifetime, you’ve wished upon many stars.

You’ve spotted a twinkle in the night sky and hoped for love or fulfillment of a dream. You’ve wished for good grades, better money, the return of a loved one. And sometimes, you’ve wished for the impossible.

But was the wish fulfilled, or was the star just another ball of gas? For a woman in the 1850s, it was the latter: in The Rebellion of Miss Lucy Ann Lobdell by William Klaber, Lucy futilely wished she was a man.

On the morning when she cut her hair, donned her brother’s clothes, and slipped from her parents’ house before daybreak, Lucy Slater left more than a wretched life behind.

She also left her daughter, Helen, which tore her heart. Still, the decision to flee wasn’t difficult.

Three years prior, Lucy’s husband abandoned his family, leaving them with nothing and forcing them to live with Lucy’s parents. Since she’d married against parental approval, there was only hostility in their home—a situation made worse because they knew that Lucy was most comfortable in the woods, wearing her little brother’s clothes. That was unseemly for a lady in upstate New York, 1855.

Men had it so much better. They could live without care, wearing breeches and shirts. They could hold jobs that paid a decent days’ wage. She envied them. So Lucy Slater boarded a train headed east, and became Joseph Lobdell.

Fearing that he’d be unmasked, Joseph kept to himself until he could grab a barge to Honesdale, Pennsylvania. There, he played the violin for patrons in a downtown inn, and he started a dancing school for the young ladies of the growing city.

Honesdale was also where Joseph fell in love with a seventeen-year-old named Lydia.

But Honesdale wasn’t far enough from New York, and someone recognized Joseph for who he really was. He’d heard about opportunities in Minnesota so, running for his life, he left Pennsylvania for the Midwest, and a life he’d been denied….

Sounds like a good adventure yarn, doesn’t it?  It is—and it’s even more enjoyable, once you know that The Rebellion of Miss Lucy Ann Lobdell is based on real life.

In his after-notes, author William Klaber says that he learned about Lucy Lobdell Slater from a writer-friend who wanted the story told. Knowing that the dearth of facts could hinder a biography, Klaber decided to fill in the blanks with fiction.

This book is none the lesser for it.

In giving Lucy the voice of narrator, Klaber lends a sure vulnerability that surprisingly lingers, and wistfulness that adds a note of sadness. He also gives her a feisty single-mindedness and keen awareness that what she was doing wasn’t just scandalous but was downright criminal. Readers who remember that important point will love this book as much as I did.

Perfect for historians, feminists, and anybody who enjoys historical fiction, this novel is a definite winner. If that’s you, then look for it because The Rebellion of Miss Lucy Ann Lobdell gets five stars