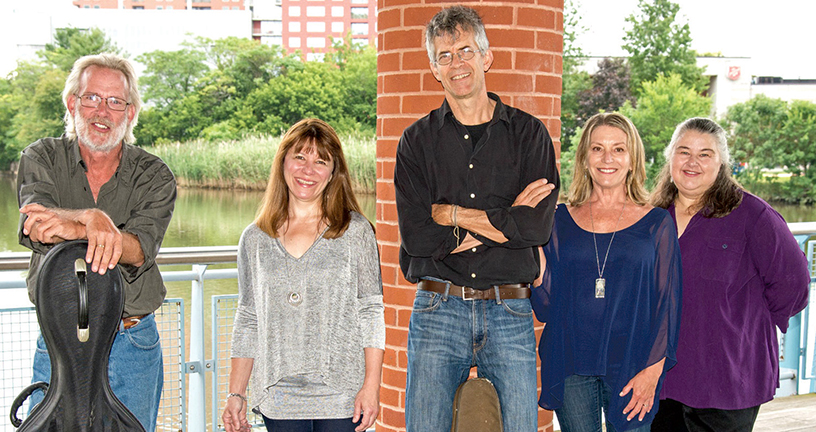 Mélomanie Celebrates Brazil with a Concert Debut in Rehoboth Beach

Mélomanie, the music ensemble known for its provocative pairings, travels to Rehoboth for a one-night-only event celebrating the music and cuisine of Brazil and a World Premiere of The Sound of the Sea by Brazilian composer, Liduino Pitombeira.

The evening begins on Saturday, April 23, with a 4 p.m. concert at CAMP Rehoboth Community Center, followed by a lively reception at Lula Brazil on Rehoboth Avenue. This event is the ensemble’s first collaboration with CAMP Rehoboth and Lula Brazil.

The concert features visiting guest artist Pitombeira, who will travel from Rio for this premiere and talk with the audience about The Sound of the Sea during the performance. Guest artists joining the ensemble are Rainer Beckmann on recorder, Eve Friedman on flute, and Naomi Gray on cello. Works by Rameau, Lully, Schieferdecker and Maute complete the program.

Liduino Pitombeira is Professor of Composition at the Federal University of Rio de Janeiro. Dr. Pitombeira received his PhD in composition from Louisiana State University in Baton Rouge. He has received many composition honors throughout Brazil and the United States, and his music has been performed all over the world.

“We met Liduino in 2014, during our ensemble’s trip to Rio de Janeiro for a music festival, and we began to discuss a collaboration,” recalls Tracy Richardson, Mélomanie co-artistic director and harpsichordist. “He immediately had an idea for the piece.”

Pitombeira’s piece is inspired by the poem, The Sound of the Sea by American poet Henry Wadsworth Longfellow. The titles of the three movements in the piece—First wave, Solitudes of being, and Sea-tides—originate in moments from the poem. Pitombeira has interpreted the poem’s ideas through beautiful, poignant harmonies and melodies. Instrumentation for this piece is alto recorder, two flutes, violin, viola da gamba, cello and harpsichord—Mélomanie’s “big band” sound.

The ensemble wanted to showcase this premiere in a unique way and thought a coastal southern Delaware venue would be perfect. Richardson headed to Rehoboth Beach and was struck by the welcoming, bright environment of CAMP Rehoboth’s Community Room. “Our initial meeting with Steve [Elkins] was wonderful; he was open to our ideas and seemed as excited as we were to produce this here,” Richardson says. “We couldn’t wait to work with CAMP on the program!”

CAMP Executive Director Steve Elkins wholeheartedly agrees. “Promoting the arts is a primary mission of CAMP Rehoboth, and the music of Mélomanie fits right in to that mission,” he says. “We look forward to hosting them on April 23.”

Likewise, connecting Lula Brazil was a natural and festive fit. “Of course, we immediately thought: ‘Could we bring Lula into the mix somehow?’” says Richardson of the Brazilian culture and cuisine-inspired restaurant on Rehoboth’s main thoroughfare. “When we brought the idea to her, Meg [Hudson, Lula’s owner] was equally excited.”

“As the owner of Lula Brazil Restaurant, I’m always looking for opportunities to share Brazilian culture,” Meg Hudson notes. “This is the perfect opportunity to combine and share cultural awareness of a Brazilian artist with food and beverages unique to Brazil.” The post-concert reception at Lula will feature light fare, signature Brazilian cocktails in a cash bar and, of course, plenty of celebration. “We’ll be serving typical Brazilian hors d’oeuvres along with Brazil’s most beloved cocktail—the caipirinha—made with cachaça, muddled limes and sugar.”

Tickets for the concert and reception are $35 and can be purchased online at melomanie.org.

Mélomanie presents “provocative pairings” of early and contemporary works —Baroque music and works from the 20th and 21st Centuries, which have included 40+ World Premieres in their 22-year history. Mélomanie performs regionally and presents a concert series at The Delaware Contemporary, a non-collecting contemporary art museum near the riverfront in Wilmington, Delaware. The ensemble has recorded two contemporary CDs, Florescence in 2011, and Excursions in 2014, as well as works by Baroque composer, Telemann.

Michelle Kramer-Fitzgerald is the owner of Arts in Media, an arts publicity company. She is a contributing writer for Out & About magazine, and she created the blog Delaware Arts Info.