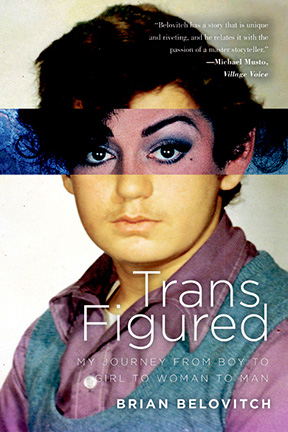 It’s not a good fit.

You saw it and loved it, but now you know the truth: it’s too small or too large. Too brassy or too muted. It’s the wrong color or the wrong neighborhood or just not you. It doesn’t fit because maybe, as in the new memoir Trans Figured by Brian Belovitch, it’s the wrong gender.

In his family of almost all boys, Brian Belovitch stood out because he lacked something his brothers had in abundance: hypermasculinity. Belovitch was soft and “chubby” with curls and long eyelashes and was often mistaken for a little girl as a preschooler, which was just fine with him. He enjoyed his femininity, even though he knew that it would get him a beating—if not from his brothers, then from his father.

Even as a young child, Belovitch says, he was overly-curious about sex, and especially about the male body. He recognized early that girls held “no interest” but boys were another matter. He was in fourth grade when he had his first sexual encounter, with a slightly older male classmate.

By his early teens, Belovitch had discovered alcohol and shoplifting. He’d run away a few times, and visiting gay clubs near his Rhode Island home was, for him, a natural next step. After a traumatic coming-out to his family, he moved in with a man he considered his first real friend; it was through Paulie that Belovitch met a community of trans women.

And that was when “Natalia” was born with “great joy.…”

She was beautiful, sexy, “my own special creation,” says Belovitch of himself as a trans woman. As Natalia, she was the toast of New York, a model and actress thanks to hormones, silicones, pilfered clothing, and a desperate need for love. Belovitch got married as Natalia, and divorced; she led him to prostitution, heroin, cocaine, alcohol, HIV, and an attempted suicide. He was Natalia when he reached out to friends and sought therapy. As Natalia, he took a “…look at the direction in which my life was heading.”
Belovitch was Natalia when he realized that he was “feminine-inclined,” but that Natalia had to go….

Toward the end of this totally frank memoir, author Brian Belovitch says that if it weren’t for the AIDS epidemic, his “story would be as common as salt.” Readers may find that arguable since Trans Figured goes well beyond unique.

Beware, though, that it’s going to put you through the wringer.

Belovitch is completely open about the abuse he experienced, and his recounting can be graphic. Beware where you read this book, because it contains nudity. Also know that nostalgia for the 1970s may hit you but that’s going to include a breathlessly steep plunge into memories of cocaine, promiscuity, and epidemic.

Still—without giving too much away—there’s a happy ending to this memoir, one that manages to educate readers as it oddly entertains them with stories of times past. It’s a happy ending well-deserved and well-told and, considering the overall uncommonness of Trans Figured, it fits. ▼