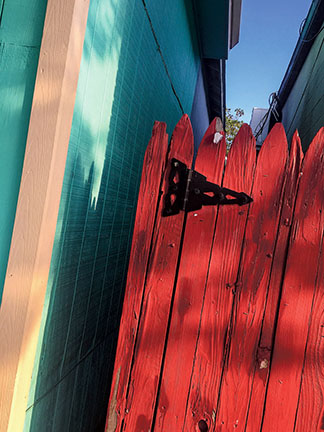 Every morning I walk my dog on Rehoboth Avenue. Pete loves it; so do I. Those walks give me time to appreciate where I live. In the months after Steve died, they got me out of the house.

In time I began to notice the world around me again—to see the streets where I live as though looking at them for the first time.

I have become fascinated by the space between buildings—some no more than narrow passageways hardly big enough to squeeze through; others the estate of garbage cans or overgrown with vines and weeds, or just empty.

I want to photograph them because they are places we don’t usually see, and certainly don’t pay attention to, attracted as we are by the fancy shops and enticing window dressings on either side.

I want to photograph almost invisible people inside that often unnoticed space between the walls.

My mother has severe dementia and is receiving hospice care at a facility in Grove City, Pennsylvania. My brother Mark and his wife Sally—and their boys when home from their studies or time in the Peace Corps—have done a remarkable job of taking care of her. On a recent rainy weekend, my dear friends Ward and Allen (who seem to have become guardian angels for my entire family) accompanied me to Grove City for my first trip to see her since Steve died.

I visited with her four times while we were there. Three of the four times, after an initial greeting she wanted to go back to sleep. The fourth and last time, she was too agitated to focus longer than a second or two on my presence.

Her condition was not unexpected as I talk to Mark and Sally frequently, and I have past experience with dementia patients. I have confidence that she is well cared for, but I know from conversations with her in the past that she would hate being like this. Somehow though, she is still able to say “I love you, too,” when I tell her how I feel.

I wonder where she has gone and if she now lives in a kind of “space between” the walls.

Rev. Jonathan Baker was the long-time pastor of Epworth United Methodist Church—first on Baltimore Avenue and again, later, at the new building on Holland Glade Road. Steve and I worked closely with Jonathan beginning with AIDS issues in the early 90s and later on laying the foundation that led to Epworth becoming the inclusive, welcoming, reconciling congregation it is today. Jonathan spoke at Steve’s funeral—and at our wedding. He remains a good friend. After retiring from Epworth a few years ago, Jonathan and his wife Donna spent much of their time working in Africa. On a recent visit to Rehoboth, he reminded me that a familiar greeting there—Sawubona—in Swahili, translates as “I see you.”

The CAMP Rehoboth mission statement calls us “to work to build safe, inclusive communities with room for all.” In many ways we have been successful in living up to that mission, especially in the broad strokes it takes to define the organization, but what about one to one? Do we as individuals really take the time to see one another?

People come to CAMP Rehoboth for many reasons. They come to socialize—to make connections with the community around them. They come to volunteer, to be a part of the collective effort of making this a better place to live. They come to access services, for support groups, for counseling, or an HIV test. Sometimes they come because they don’t know where else to go.

For far too long the greatest weapon used against LGBTQ people was invisibility. We hid in the closet. We hid from the world around us. We were the ones living in the space between the walls. The closet allows no one to be seen for who they really are. Closets mangle the truth and twist our souls into knots.

Nowadays, as we work on our strategic plans for the organization, some of those old conversations resurface, this time as they relate to creating a welcome for all people—especially during the busy summer months when parking meters and traffic congestion make it difficult for some to come downtown. We are still passionate about being a visible presence downtown, and now, we are also considering ways to carry CAMP Rehoboth “off CAMPus” as well—and to make it visible in places where LGBTQ visibility is as needed today as it was in downtown Rehoboth Beach 30 years ago. Already we have three satellite HIV testing sites and our CAMP Rehoboth Outreach Program (CROP) carries volunteers out to a wide variety of places throughout the state.

All of us who work and/or volunteer at CAMP Rehoboth understand that part of our job is to welcome everyone who comes to us. When we’re in the middle of a deadline, or rushing from one meeting to another, there are simply times when we have to put all that aside and focus on the wellbeing of someone who needs us. Steve instinctively understood that, and almost every day since his death, I have been reminded of his generosity of spirit. He saw people who were hanging back in the shadows of those in between spaces—who needed to be seen, who needed a kind word, or a smile.

Shortly after Steve died, I got word that the mutual friend who introduced the two of us the first time we met, had committed suicide. Oddly, I was not surprised. Nothing he ever said led me to think that he would take his own life, but his occasional communication with me seemed more eccentric than usual and his glowing reports about a recent move to Palm Springs rang less than true in the back of my mind. At the time it was all I could do to take care of Steve, but looking back I feel sure I was seeing through his “gay” façade to the real man inside. He was hurting; I was too far away.

Sawubona. I see you. What a powerful thing to say to someone hiding in between the walls.▼

[Editor's note: Murray's mother passed away as this issue was on its way to press.]