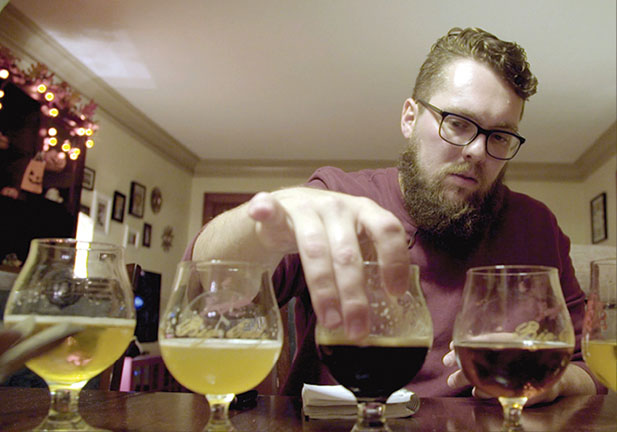 This year marks the 21st anniversary of the Rehoboth Beach Independent Film Festival. For eleven days (November 1-11) the Festival presents dozens of American and international features, documentaries, and shorts. This is the oldest and largest event of its kind in the State of Delaware.

Screenings will take place at the Rehoboth Beach Film Society’s Cinema Art Theater on Route One, the large Cape Henlopen High School Theater in Lewes, and the comfortable sanctuary at the Unitarian Universalists of Southern Delaware on Route 9.

An expanded Festival program for 2018 presents a total of six IN DEMAND schedule slots on Sunday (November 11), designated for encore screenings of films that are popular and/or highly rated by audiences. The films selected for these slots will be announced at 3 PM on Saturday, November 10 on the Rehoboth Beach Film Society’s website and at the Box Office. Tickets will available for online purchase at the same time.

As always, the Festival offers a diverse selection of film subject matter for a variety of interests. Looking ahead, in April 2019 the Film Society will present Delaware LGBTQ+ CINE-brations, in partnership with CAMP Rehoboth. The Rehoboth Beach Film Society’s strategy, according to Executive Director Sue Early, is “to save the best LGBTQ+ films for that event, but three very good films are programmed into November’s Festival.”The following are only some of the independent films on tap for the 2018 Festival. Many, many more include a biographical comedy about the secret life of writer Emily Dickinson, a tribute to Hal Ashby, and a suspenseful thriller.

Get information about films, the screening schedule, and instructions on how to purchase tickets at rehobothfilm.com. Tickets may be purchased easily online or, for those into risk-taking, try the Rush Ticket Sales option.

There are plenty of volunteer opportunities during this event as well. To schedule a shift, please call the Main Film Society Office at 302-645-9095. 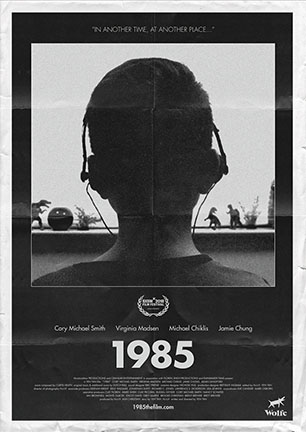 1985
Inspired by the award-winning short film of the same name, 1985 follows Adrian (Cory Michael Smith, Gotham), a closeted young man returning to his Texas hometown for Christmas during the first wave of the AIDS crisis. Burdened with an unspeakable tragedy in New York, Adrian reconnects with his brother (Aidan Langford) and estranged childhood friend (Jamie Chung), as he struggles to divulge his dire circumstances to his religious parents (Virginia Madsen and Michael Chiklis).
[Dir. Yen Tan, 2018, USA, 85 minutes. Rating: NR] 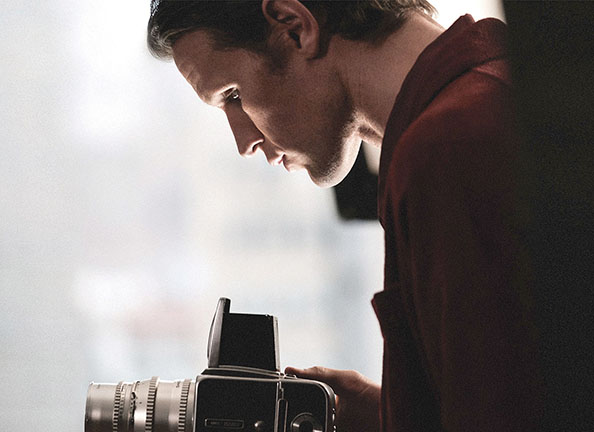 Mapplethorpe
An intimate portrait of the celebrated yet controversial photographer Robert Mapplethorpe (Matt Smith—Dr. Who, The Crown). The film explores Mapplethorpe’s life photographing his friends, including artists and musicians, socialites, film stars, and members of the S&M underground. Mapplethorpe’s work displayed eroticism in a way that had never been examined or displayed before to the public. The film explores the intersection of his art, sexuality, and struggle for mainstream recognition.
[Dir. Ondi Timoner, 2018, USA, 102 minutes. Rating: NR] 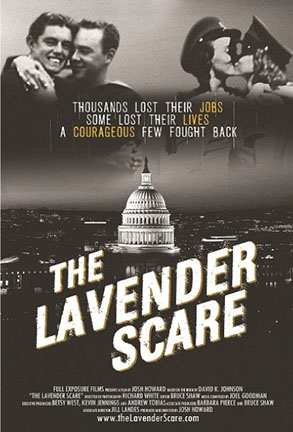 The Lavender Scare
This film documents the story of an unrelenting campaign by the federal government to identify and fire all employees suspected of being homosexual. In 1953, President Eisenhower declared gay men and lesbians to be a threat to the security of the country and unfit for government service. In doing so, he triggered the longest witch hunt in American history. In 1957, after thousands had lost their jobs, a Harvard-trained astronomer named Frank Kameny became the first to fight his dismissal. This is a compelling story of one man’s fight for justice.
[Dir. Josh Howard, 2017, USA, 77 minutes. Rating: NR] 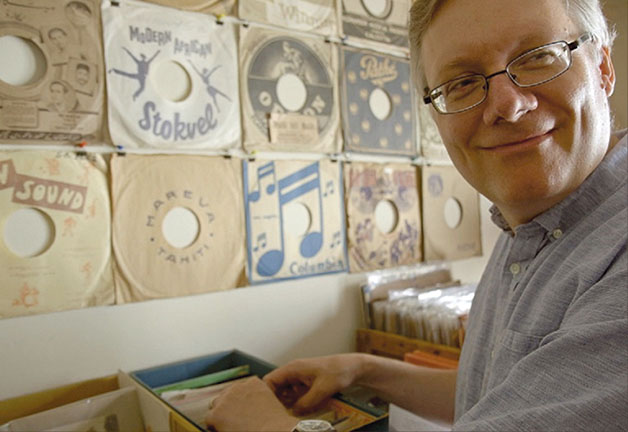 Bathtubs Over Broadway
For all audiences, this year’s Festival has a unique selection of very appealing documentaries. For example, did you know there was a whole world of corporate musicals which sustained the lives of Broadway stars and well-known song writers? Well, Bathtubs Over Broadway is the film that reveals this unknown treasure.
While scouring bargain bin vinyl to use on a segment of Late Night with David Letterman, comedy writer Steve Young stumbled upon bizarre cast recordings of Broadway-style musical shows about some of the most recognizable corporations in America. His find led him to an unexpected, decades-spanning obsession. This comedic music documentary features David Letterman, Martin Short, Chita Rivera, Susan Stroman, Jello Biafra, Florence Henderson, and more.
[Dir. Dava Whisenant, 2018, USA, 87 minutes. Rating: NR]

Brewmaster
Beer lovers will enjoy Brewmaster, the story of craft beer as told through a young New York lawyer who dreams of opening his own brewery and a Milwaukee-based beer educator trying to pass the Master Cicerone exam. Helping tell the story of beer are some of the best-known personalities in the industry, including Sussex County’s own Sam Calagione.
[Dir. Douglas Tirola, 2018, USA, 95 minutes. Rating: NR] 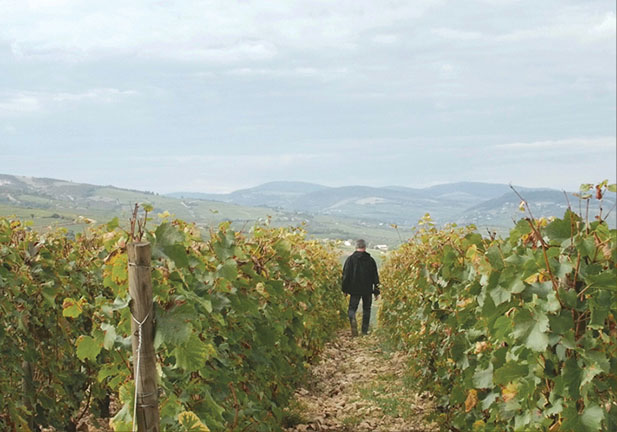 Three Days of Glory
And yes there is a film for wine enthusiasts—Three Days of Glory. Les Trois Glorieuses (Three Glorious Days) is the name of the world’s greatest wine celebration in the most legendary of wine regions. This documentary offers a glimpse into aspects of Burgundy never filmed before. Home to the most renowned wines on the planet, a series of difficult years in the 20s and 30s led to the creation of a wine festival. This is the story of that festival, its origins, and the small-estate winemakers of today who have faced a string of brutal years that threatens their very survival.
[Dirs. David Baker and Scott Wright, 2018, USA, 72 minutes. Rating: NR] 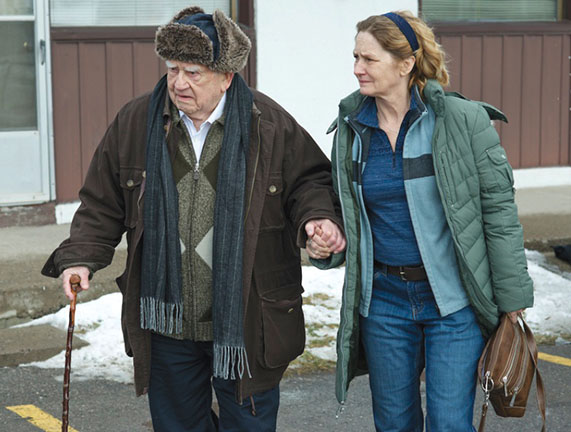 The Parting Glass
Who can pass by a good dysfunctional family story, especially if the cast includes Ed Asner, Cynthia Nixon, Melissa Leo, and Denis O’Hare? The film is The Parting Glass. After the death of their beloved sister Colleen (Anna Paquin), three siblings (Melissa Leo, Cynthia Nixon, Denis O’Hare) and their father (Ed Asner) travel to her home to uncover the truths of her death and reminisce about a lifetime of memories.
[Dir. Stephen Moyer, 2018, USA, 95 minutes. Rating: NR]

Bel Canto
Fans of Julianna Moore and opera lovers who enjoy the voice of Renée Fleming must see Bel Canto, based on the best-selling novel by Ann Patchett. Julianna Moore portrays a world-renowned opera singer who becomes trapped in a lengthy hostage situation when she’s invited to perform for a wealthy industrialist in South America. Unexpected bonds are forged in the standoff that ensues. Opera star Renee Fleming provides vocals for Moore’s character.
[Dir. Paul Weitz, 2018, USA, 102 minutes. Rating: NR] 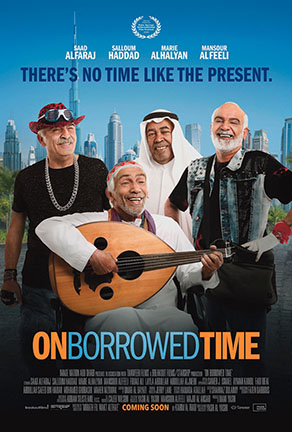 On Borrowed Time
And for some humor, you must see On Borrowed Time. When an elderly man in Dubai suddenly inherits countless millions, he and his three friends plot an escape from their monotonous lives in a senior home. The men embark on an adventure that forces them to face their fears and uncover secrets. Throughout the streets of Dubai, they follow their forgotten dreams on a journey of self-discovery, forgiveness, and fun.
[Dir. Yasir Al Yasiri, 2018, UAE, 95 minutes. In Arabic with English subtitles. Rating: NR]

For information about films, the screening schedule, and instructions on how to purchase tickets visit rehobothfilm.com.▼