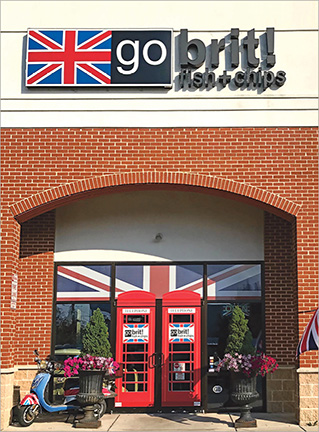 go fish!, the popular fish and chips restaurant on the ocean block of Rehoboth Avenue, is a tiny eatery that thinks big. Providing fish and chips to the area since 2002, owner and London native Alison Blyth has brought to the states a wide choice of British dishes: beer-battered fish and chips, bangers and mash, shepherd’s pie, mushy peas, and sticky toffee pudding (featured on The Today Show).

She also gives American food its due, with boardwalk favorites like crabcakes, stuffed flounder and shrimp, steak, softshell crabs, and fish tacos. Seven days a week throughout the year, you can have all of this with a pint of hard-to-find English beer.

Our first lunch visit to this fine little restaurant found us splitting our allegiances. Sally ordered the “Brighton Beach” Crabcake Sandwich. The sandwich was a good size and the crab featured a spice used in excellent proportion to the cake. The sandwich stayed together and the crab wasn’t dry. A buttery bun only added to the flavor.

Feeling more British than Sally, I ordered the go fish! Shepherd’s Pie. This pie was huge, almost twice the size I am used to. The beef was flavorful, and finely complemented by carrots and onions. All of this covered by an ample portion of mashed potato, with just the right fluffy consistency and slightly crusted on top.

We planned to leave the restaurant totally satisfied, so convinced ourselves to try their brownie covered in chocolate sauce, caramel sauce, and whipped cream. To our credit, we ate only half and took the rest home to devour later.

I’ve also found myself outside Rehoboth proper having a particular yen…beer-battered anything. Ms. Blyth has taken care of that problem. In 2017, go brit!, go fish!’s “little sister,” opened up on Route 1 in Lewes. It mostly mirrors go fish!, except that the menu is slightly smaller and food is ordered at a counter, then delivered to your table. It has the same good service, though.

In lieu of a server taking your order, a person behind the counter does the same. Our order taker was every bit as helpful as a server. Adrienne explained the menu, helped us choose our meals, and brightened our day with her sunny disposition.

In addition to the tiny British flags ringing the dining area, there is a Mini Cooper right inside the door! By the counter area, there are life-size cardboard cutouts of the Queen and Prince Harry who, it turns out, is my height.

At go brit!, I tried the clam chowder as my starter. It had a heavenly flavor I couldn’t identify. One of the helpful staff scurrying around delivering food divulged the secret: Chardonnay! This chowder was memorable. Sally had chips and three kinds of sauces (sweet chili, curry, and chipotle) that were delicious. The never-frozen chips were thick, crispy on the outside with a soft center.

I then ordered what the sister restaurants are famous for, their beer-battered fish and chips, while Sally tried the beer-battered shrimp atop a Caesar salad. The fish was Alaskan pollock dipped in a homemade, light and crispy batter. The salad consisted of romaine hearts, a small detail but one missed by many restaurants.

My new love is beer batter! Sally loves it too. Our pollock and shrimp were enveloped in the light and crunchy batter, which is not greasy and complements the seafood perfectly.

go fish! and go brit! offer area diners the best of both worlds, British comfort food and American seafood favorites served in large portions by chipper staffs for reasonable prices. Yes, the British are here, and we are glad! ▼

Michael Gilles is a writer, playwright, and theatrical producer, retired to Milton, and gleefully scoping out the culinary coast. Sally is his fellow dining adventurer.