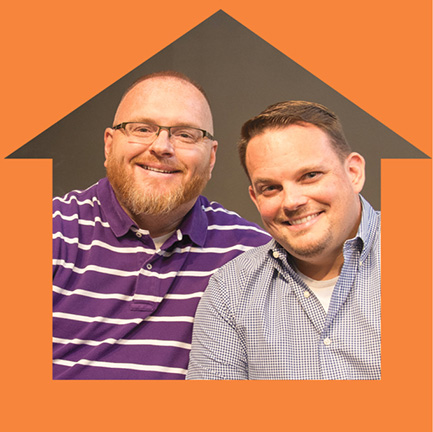 Terry Kistler and Chris Berg met online 10 years ago, and were married in May 2012. Chris is a native Delawarean and his family has had a house at the beach since 1981. Lucky for him, he spent every summer on the shore while growing up. Chris works for IHG (InterContinental Hotels Group) as a Portfolio Revenue Manager.

Terry grew up in Titusville, Pennsylvania and has been a resident of all three Delaware counties at some point in his professional career. Terry is employed as a Vice President at WSFS Bank. They are the loving parents to two Saint Bernards, Stella and Rocky, and one cat, Blackberry.

About four years ago.

The CAMP Chorus and Sundance (so far).

Chris: It’s hearing the audience’s reaction to the performances by the CAMP Chorus—it’s a fun time for all involved!

Terry: Volunteering for the Sundance Live Auction is very exciting—it’s great to have the support of so many businesses and community members providing items for the auction, and it is fun to see how much money is raised for CAMP Rehoboth.

We are torn between Sundance and the Block Party. We are big fans of events that bring folks from all walks together for a good time and positive purpose!

Favorite season at the beach?

It has to be fall. There are lots of events, and beautiful weather.

Chris: To know it’s ok to fail so long as you are willing to learn from it.

Terry: To know it will be ok, and that there are others out there just like you.

Chris: While there have been many famous names worthy of consideration as LGBTQ heroes, I don’t have to look far to find mine. I met Steve Elkins and Murray Archibald in 1994 while attending Epworth Church in downtown Rehoboth Beach. Sadly, it wasn’t really until Steve’s passing earlier this year that I took the time to reflect on all that these heroes have done for our community. The two literally shaped some of the most important, formative years of my teens and 20s when I was realizing my identity as a gay man. Steve and Murray helped create a more tolerant and accepting community in Rehoboth—one in which I, and other LGBTQ youth, would ultimately become beneficiaries of a safe environment in which to accept ourselves as we were born to be.

Christmas—the family, the music, the sentiment, and the decorations!

The LGBTQ community has made significant progress in the fight for equality over recent years. Did you expect to see this in your lifetime?

Simply, no. Since we both grew up in small towns where tolerance was negligible at best, neither of us felt equality would be likely in our lifetime. And while there have been gains, a long fight still exists.

Given the new political climate, are you concerned about the possible loss of rights for the LGBTQ Community?

Absolutely. At the rate the current administration has been reversing the past several years—if not decades—of positive policy advancement on many fronts, LGBTQ rights are not immune from arbitrary crosshairs of an intolerant and divisive man-child and his minions. And while we hope this current trend is temporary, we are encouraged about the future generation of leaders. As board members of the Rehoboth Beach Bears organization, we are inspired by the young leaders we have met through our partnership with the Cape Henlopen Gay Straight Alliance. Their passion and energy is amazing and we encourage our community to support their great purpose!

Don’t be afraid to be yourself. It is exhausting to edit your life for the satisfaction of others.

The vast development—both residential and commercial, the burgeoning and sophisticated culinary culture, the extraordinary arts scene, and the improved relations between the gay and straight communities.

We are thankful for one another, and the fact we can live in an amazing community where we are not embarrassed or afraid to be ourselves!

Chris and Terry, thank you for the time you spend volunteering for CAMP Rehoboth.  We need more of the younger generation like you to continue the mission of CAMP Rehoboth. We hope you will continue to volunteer, and look forward to working with you at our next event. ▼