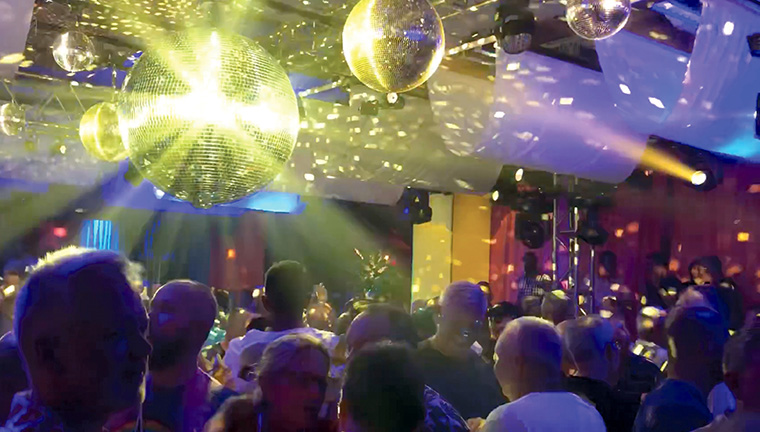 Many Tribes Under the Same Roof

Everyone is talking about it. From 7 p.m. until closing, the dance floor was packed. Gin was dry by 8:15 (who knew? as much was ordered as usual!). By 9:30 a team was sent out to double down on the ice order. At 10 p.m., when Robbie Leslie ended to applause and howling, the demographics slowly shifted as the early crowd left and the late crowd arrived. All hail the Sundance two-dance, one-ticket combo. We shimmied our hips all night. Steve’s spirit was strong and with us. It worked!

It worked to bring more people together and out on the dance floor to raise arms and lift spirits.

It worked to bring different tribes and a broader community under the same roof.

It worked to give us a retro boost and a contemporary infusion.

It worked to make us laugh and to cry.

It worked to keep smiles stretched across faces all night long.

It was a joy to see.

In addition to the twofer, another new tradition was started. We brought our Disco Lottery game into the public—after years of talking about it. Nineteen people submitted songs they hoped or thought the DJs would play. There were many winners. Even me! Since we don’t track the winners per se, and I’ve already admitted that I’m audio-challenged, I can only say that I wish we’d heard them all. They were all great choices. Several people picked the same songs (allowed). Some picked two, some four, one five (a bonus! allowed). We were all winners when we heard “In The Name of Love.”

If there’s a number following the song title, that song was selected by more than one person. Some folks included performers, others did not. Here is an awesome start to your next playlist.

There’s no doubt, it was a night in the name of love. And a sweet, sweet success. ▼

“A Rose Is Still a Rose” Aretha Franklin
“Age of Reason”
“Ain’t No Mountain High Enough” Diana Ross
“Blue Savannah”
“Dancing Queen”
“Dancing” Kylie Minogue
“Do or Die” Grace Jones (2)
“Dolce Vita” Ryan Paris
“Don’t Leave Me This Way” (2)
“Music: Hey Mr. DJ” Madonna
“Gonna Get Along Without You Now” Viola Wills
“High”
“I Was Born To Love You” Freddy Mercury
“I Will Love Again”
“I Will Survive” Gloria Gaynor (3)
“It’s Raining Men”
“Let The Music Play” Shannon
“Let The Sunshine”
“Little Bird” Kim Sozzi (2)
“Love Is in The Air”
“Love to Love You Baby”
“Made for Now” Janet Jackson
“You’re the First, the Last, My Everything”
“Natural Woman”
“Night Fever”
“No More Tears to Cry” Ariana Grande
“No Regrets”
“Pandora’s Box”
“Perfect Day”
“Rescue Me” Aretha Franklin
“Respect” Aretha Franklin (2)
“Ring My Bell”
“Ritmo De La Noche”
“Shame” The Best of Evelyn “Champagne” King
“Shape of You”
“Simply the Best”
“Soldier”
“Stop in the Name of Love”
“The Only Way Is Up” Yazz
“This Is Me” (4)
“Unspeakable Joy” Kim English (2)
“Wait” Maroon Five
“We Found Love” Rihanna
“What the World Needs Now Is Love”
“You Know How to Love Me” Phyllis Hyman
“Your Love Is a Lifesaver” Gayle Adams