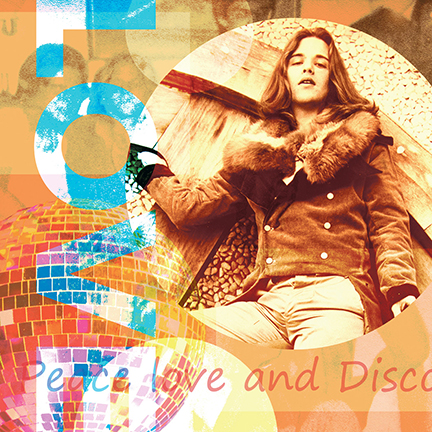 Stories of Peace, Love…and the Road to Disco

In the summer of Stonewall I was 16 years old. A hippie in spirit, even if the body was still bound by the rules and regulations of an uptight high school principal who frowned upon long hair and flamboyant attire.

By my senior year, my dad grew weary of the constant harassment about the length of my hair, and marched down to the school to demand that they stop sending me home because my hair was too long. I suppose he used whatever small influence he could summon as senior pastor of the town’s prominent First United Methodist Church to make that demand. Whatever he said, it worked. I was never sent home again.

And then came the 70s. Our hippie peace, love, and flower power gave way to the age of disco.

All my life I have believed that Stonewall was a part of the larger cultural rebellion happening to my generation. Civil rights, gay rights, women’s lib—we stood up for what we believed. We pushed back against racism, homophobia, sexism, and injustice.

We had no way of knowing that by the end of the decade AIDS would strip our innocence like flesh torn from a bone.

In a recent interview, I was asked about that period between Stonewall and the advent of the AIDS crisis. Memories have been flooding back ever since.

I spent the first year of my college life in a dorm, and I do hope my poor timid roommate was not forever traumatized by the year we spent occasionally sleeping in the same room together. The next year, in cahoots with a couple of theater pals, we rented a big house across the street from the school, where I remained for the duration of my time there. The place was home. It was also infamous as a gathering place. Actors, artists, wayward hippies, and all manner of assorted cultural oddballs seemed to feel at home there.

The address of that house—919 8th Avenue—is forever etched in my mind. We called it by its number. “I’m going to 919,” we would say. To this day I continue to see that number everywhere I go. I dream about that house, but in those dreams it is always transforming into something unexpected once I walk through the front door.

The last time I visited the school I drove by it. At least where it used to be. It was gone. An empty lot in a neighborhood that looked—oddly—exactly like it did 40 years ago.

It made me think of the end of the movie Carrie.

Far more than the house itself were the friends who lived there, or hung out there, or were just part of our big extended family.

Diane, Bobby, Billy Bob, and Sam (otherwise known as Sarah) all lived in the house at various times. Diane is black. It’s a miracle the two of us were never lynched for our escapades in the state of Alabama.

Diane was the perfect bra-burner. She had no use for one. Though amply endowed, her breasts maintained a perky attitude at all times. Like a warrior woman. Almost defiant. She loved to flash them at opportune moments. We almost always escaped unharmed.

Bobby was arguably my best friend in college. Every bone in his body had outrageous engraved upon it. When I met him, he swore he was straight. Unlike others, I never questioned him about it. Until he turned up in my bed one night.

Billy Bob was cute and eccentric even for our bunch. For years after we all went our separate ways, he was the one who tried to keep us in touch with one another.

Sam—dear, sweet, talented Sam. Of all of them, she touched my spirit in a way that stays with me even today. We keep up on Facebook occasionally. Theatregoers in Washington DC know her as the actor Sarah Marshall.

There were others, many others. George, the star actor and my first major crush. Ben the guru. The funny guy, Glenn Scott—who grew up to be the actor Glenn Shadix best known for his role as Otho in the movie Beetlejuice.

Bobby and George had each moved to New York after school. They both died early on in the AIDS epidemic. Billy Bob became William. His partner succumbed to AIDS a few years later. William fought on for as long as his soul could bear it.

Occupied as we were with each other—as all newly together couples are—we barely noticed that the 70s were over. My long hair was gone. Disco was king. A new world beckoned to us.

Maybe it was the times, maybe the innocence of youth—or a little of both. Those days remain untarnished in my memory.

Today the world is different. I’m different. Sculpted by years of love. Tempered by pain. Burnished by grief. We take on the patina of life.

CAMP Rehoboth has been at the heart of my life for 30 years. My family is trained to interact with me based on the deadline schedule for Letters from CAMP Rehoboth. I plan vacations around that same schedule.

As I prepare to step out of my leadership role at CAMP Rehoboth I try to imagine what history will have to say about our time here. The Rehoboth Museum has already included a photograph of Steve and me in its permanent collection.

That’s a good enough sign for me that it is time to retire. I mean, come on, when the historical society puts your picture on the wall, it’s time to say goodbye.

I’m encouraged by the fact that I’m joking about it.

We will continue to tell our stories of peace, love, acceptance, understanding, and equality.

And guess what, even after all these years it’s still got a disco beat. ▼