Over a year ago we rented and paid for an AirBnB, dog-friendly rental for February 2019. With a friend planning to join us, and possible visitors, we selected a beautiful two-bedroom home with a convertible sofa and a small pool.

Just 14 days before our arrival, AirBnB sent me a morning email. Subject: Craig Had to Cancel Because of an Emergency.

Apparently, he sold the house, making it an emergency only for us. Silly me, I thought a rental contract must be honored, but AirBnB said “NO,” though they offered us a refund, and $200 extra “to make sure you still have a great stay in Sarasota.” Where? Sleeping in the bus station?

Thus we began a frantic 16-hour computer siege, madly seeking shelter. Mind you this was when it was 13 degrees in Rehoboth and going home did not seem like a wise option. Or even a viable one, as we’d offered our home to a friend needing a place to stay.

Turns out AirBnB’s $200 “gift” was solely for another AirBnB rental and there was absolutely bupkis available. Well, except for a $12,000 per month beachfront Taj Mahal, but then March would be spent in debtor’s prison.

We were screwed and in full-out homeless snow bird panic.

By 11 p.m., bleary-eyed and manic, I found a listing in an RV and manufactured home “resort.” Okay. We’ve owned an RV, stayed in plenty of cool parks, and currently live in a very nice manufactured home. Bring it on.

So we quickly booked the 2-bedroom (plus pull-out sofa) two-bathroom home. It was a little more expensive, but the park had amenities. On to Sarasota. How bad could it be?

OMG. We entered the park, driving by hundreds of RV sites and tiny manufactured homes so close together neighbors could easily watch each other’s TVs.

Entering our property, our first impression screamed cluttered and ugly, mere months from an appearance on Hoarders. The décor would make a gay man weep.

As I could clearly see and hear the pontificating fiction reporters from FOX News on the 55-inch screen next door, I studied our own “living room.” With our TV mounted perpendicular to the couch, we’d have to watch MSNBC sitting shoulder to shoulder on the sofa with our heads permanently turned 45 degrees to the right.

The skinny hallway led to a DIY project they called a bedroom but was merely an inside cabin barely the size of a bed. Beyond that lurked the purported half bath, a metal storage shed bolted to the trailer. All we saw was a toilet. It took us a good five minutes to realize that a miniature sink sat perched atop the tank. And get this—you turn on the faucet to flush. My god, I could multi-task, straddling the toilet to wash my hands while enjoying a simultaneous bidet. 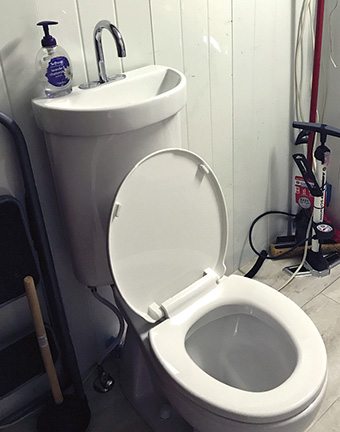 Holy crap. The original rental cancellation was a disaster but did that mean the remedy was a FEMA trailer?

The “master” had less than 11 inches on either side of the bed to crab-walk in and out. I could not stand back far enough from the closet’s sliding mirrored doors to see anything but my front teeth. I climbed onto the bed and stood up to see my pants.

House rules: no dogs up on the furniture unless you cover it with a blanket. There was already a dirty blanket on the sofa, which when removed revealed an even filthier fabric. We vowed to wash that blanket so people could be up on the furniture.

Moving along, we eyed the tiny “full bath” adjacent to the itsy-bitsy kitchen. It would be unsettling to fill a glass from the icemaker with my backside halfway into the bathroom.

And speaking of drinks, the tiny table would have to double as a bar and my editorial office. Admittedly, having the Tito’s vodka so close would be mighty efficient.

And it was. Efficient and vital to survive. Which we did, barely. With our backs up against the wall in more ways than one, we made ourselves at home and had fun anyway.

The community amenities—pool, pickleball, and watercolor classes—provided the exercise yard to our cell-block. We ruled the phony half-bath off-limits except for emergencies. We dunked in the hot tub to re-adjust our TV-watching necks. And we braved hearing loss so the neighbors could fully appreciate Rachel Maddow. As added therapy we wrote a painfully honest and snarky online review of the overpriced horror house.

Now, for March, we are happily ensconced in a beautiful place in Gulfport, Florida. But heed our warning: AirBnBeware! Make sure you study the photos. Although in the listing, they didn’t have the chutzpah to show the sink/toilet thingie. But I have memorialized it for you here. Enjoy. ▼