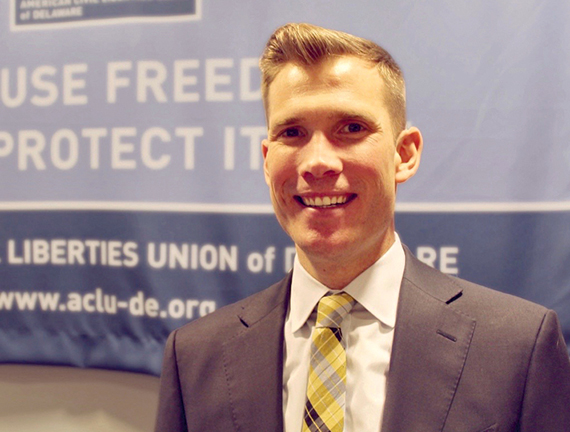 “I built my career advocating on behalf of trans students….I felt like it would have been an ultimate betrayal of all those students if I were to turn a blind eye to the obvious violations of law and abuse of authority I witnessed.”

I wanted you to see what real courage is, instead of getting the idea that courage is a man with a gun in his hand. It's when you know you're licked before you begin, but you begin anyway and see it through no matter what. Thus spoke Atticus Finch in Harper Lee’s To Kill a Mockingbird.

A young man in Wilmington, Delaware “began anyway” and has seen several incidents through. He may not have known he was licked before he began, but he had his convictions firmly planted in his heart and acted on them. Dwayne Bensing was an attorney on staff at the Office of Civil Rights (OCR) in the Department of Education (DOE). Things were changing in his department under the appointment and confirmation of Betsy DeVos as head of the DOE.

Strides toward inclusion and equality that came under the Obama administration were being stripped away with intentional policy shifts. Title IX has been one of the casualties. The Alliance Defending Freedom (ADF) filed a complaint with the DOE regarding the Connecticut Interscholastic Athletic Conference (CIAC) allowing transgender athletes to compete as their identified gender. The ADF is labeled a hate group by the renown Southern Poverty Law Center (SPLC). Their position is that cis-gender female athletes are subject to discrimination because transgender female athletes are competing against them. This results in lost athletic scholarships, unfulfilled college acceptances, and more, states the ADF.

DeVos instructed her legal staff to respond to this complaint on behalf of the ADF. However, there had not been a determination giving DOE jurisdiction with the CIAC, since they received no federal funds. According to Bensing, “We also had not determined OCR's subject-matter jurisdiction—that is, OCR had not yet developed a legal interpretation of Title IX that would recognize what was alleged in the complaint (permitting trans female athletes to compete against cis female athletes) as being a violation of federal law. Adding to my concern was the fact that I discovered political appointees were deeply involving themselves in the matter and demanding that career staff open the complaint quickly, without first analyzing these threshold legal issues.”

The Washington Blade received copies of emails within the OCR that revealed steps being taken to set up the defense of ADF in this case. Chris Johnson, the Blade reporter, shared the provision that such complaints must be filed with DOE within six months of the incident. However, DOE took issue even though it was beyond the time limit. In an internal DOE investigation, Bensing was found to be the source of those emails. He was reassigned and ultimately terminated from employment.

Fortunately for him, Bensing had seen the handwriting on the wall, and knew his time at DOE was coming to an end. A position was ready and waiting for him at the offices of the ACLU of Delaware, and he has been a staff attorney there since January of this year. In the interview for this article, Bensing shared his reasons for taking whistle-blower action at DOE.

He stated, “I built my career advocating on behalf of trans students. My first major pro bono case was on behalf of a trans college student. I held Gavin Grimm’s mother’s hand during the Gloucester trial. I was on the team that sued North Carolina over the Bathroom Bill and helped draft the Obama Guidance regarding transgender students. I felt like it would have been an ultimate betrayal of all those students if I were to turn a blind eye to the obvious violations of law and abuse of authority I witnessed.”

“I went to law school to protect civil rights, not to undermine those rights. While this administration may want to turn everything on its head, I felt a deep sense of obligation to Americans as a federal bureaucrat to do my job and make sure that procedures, rules, and the law were followed.”

Dwayne Bensing has proven his bona fides as a civil rights attorney acting on behalf of trans students in particular and the LGBTQ community in general. He has since settled into his position at ACLU of Delaware. He and his partner are working from home, given the current climate of COVID-19.

The mission statement for the OCR of DOE reads, The mission of the Office for Civil Rights is to ensure equal access to education and to promote educational excellence throughout the nation through vigorous enforcement of civil rights. The OCR said farewell to one fine young attorney who would have helped them fulfill that mission. And Delaware is better for it. Transgender students across Delaware are better for it.

David Garrett is a straight advocate for equality and inclusion. He is also the proud father of an adult transdaughter. Email David Garrrett at dlgarrett4rb@gmail.com