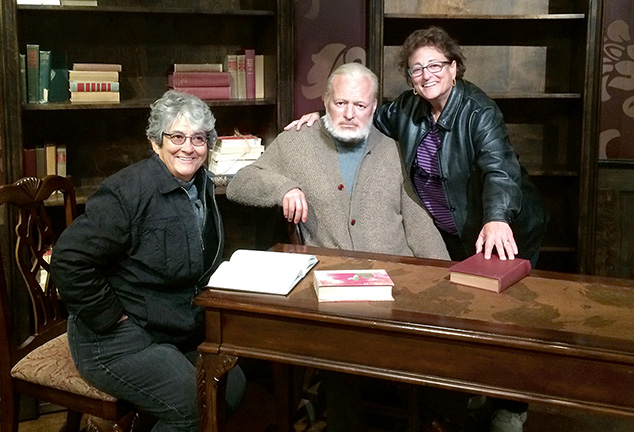 Fay and Bonnie hang out with Ernest Hemingway.

Thanks to generous friends who had time-share points to use or lose, Bonnie and I wound up with five free nights at the decadent St. Regis Hotel in New York City.
The St. Regis, at 5th Avenue and 55th Street is the most gratuitously luxurious hotel I have ever stayed in or be likely to stay in again. In fact, the accommodations were so stupefyingly self-indulgent I felt guilty—how can I enjoy this when people are homeless and starving and….

Well that lasted about a minute. My not using the complimentary butler service or not plunging into the 800-thread Egyptian cotton sheets was not about to solve world hunger. Although I was stunned that the actual cost of the room would have been more than a dollar a thread count per night.

But I dove right in anyway. The next morning, our wake-up call was a real person instead of a digital robot, saying good morning to us by name—although our friend with the time share points booked the room, so our butler called us by her name.

The butler arrived with our coffee (one with cream and one with soy milk as requested), set it down on the coffee table (under the Waterford chandelier) and asked if he should pour it for us. By all means.

Oh, and he brought back the shoes I’d put out the night before for polishing. It may have been the first time the staff polished dilapidated Clark’s clodhoppers. Now they looked new.
Each day we also got a complimentary fruit basket, an ice-bucket refilled several times a day and a newspaper of our choice. Favorite touches included the lavish bathtub, shower and twin sinks, along with plush bathrobes and fuzzy slippers. The replica Louis IV bedside tables had phone charging stations on the side. But my fave by far was the television embedded in the bathroom mirror, like magic, no frame, no dials, just an image that eerily comes up on the mirror when you push a button. I watched a PBS fundraiser with clips of Ethel Merman singing “There’s No Business Like Show Business” while brushing my teeth.

The whole hotel experience flew in the face of our usual experience. We go for cheap and clean, saying “how much time do you spend in the room anyway?” But this time we spent a lot of time lounging in the room, forgoing the nightcap or early walk for more time to luxuriate. Was the room $735 a night better than the Sleep Inn or Motel 6? Yup.

Of course, our free stay had its downside. We had to hoof it to breakfast at a bagel place down the street because the hotel menu offered the lowly plain omelet at $42. A jumbo mortgage was required for French Toast. The service charge alone for room service would buy a delicious breakfast for two at Crystal. A glass of orange juice in the dining room was $4 more than a glass of orange juice AND Grey Goose vodka at Blue Moon.

Did you know that the Bloody Mary was invented at the St. Regis in 1934? Or so they claim, but I believe there are dissenters like Harry’s Bar in Paris. But we read the history of their bartender concocting the drink but calling it a Red Snapper because the name Bloody Mary was just too vulgar for the time. I read the tale but didn’t taste the official hotel signature drink because it was $25, making it much too vulgar for me. I got one in the theatre district for eight bucks.

And this hotel is so over the top there’s an employee in the lobby just to push the revolving door for you. God forbid you should move a muscle.

Once out in the street we could see a huge change in the city since our last visit. It was now completely Uberized. There seemed to be less private cars and even less yellow taxis than ever before. But the streets teemed with big black sedans and SUVs, all of them working for the new transit service Uber.

We loved just calling a car from our smart phones and having somebody pick us up within minutes, charge the ride to our credit card, and in lieu of requiring a tip, asking for a simple 1-5 star rating. It was great.

Although eight million people are all standing in front of buildings squinting at black cars to see if they are Toyotas, Suburbans, Cadillacs, or whatever their iPhones tell them is coming to get them. Frankly, with all the black vehicles, the whole city looks like it’s at a funeral.

We did a lot of fun things for five days, like getting half-price theatre tickets, strolling through Times Square, getting our fill of corned beef on rye, and then going from the ridiculous
(champagne cocktail at The Plaza) to the sublime (hot dog cart lunch in Central Park.)

We even spent a fun morning at Madame Toussaud’s—hob-nobbing with waxy celebrities who would expect their friends to stay at the St. Regis. We had a grand time.
But all good things must end, as we checked out of the lush life and headed back to the trailer park.