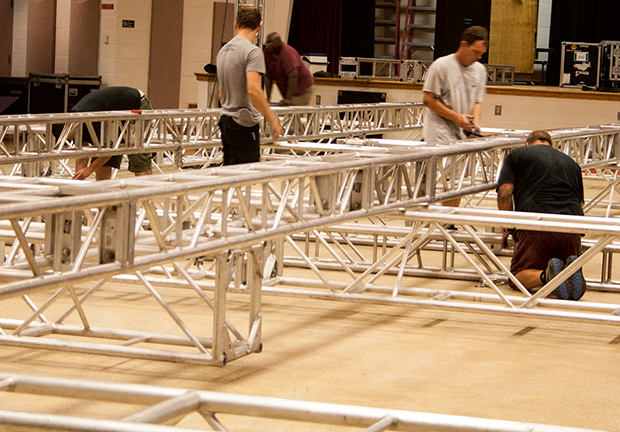 CAMP Rehoboth and My Sundance Experience

All those who have undergone volunteer training at CAMP Rehoboth—especially those who have played their unique version of Jeopardy—know that CAMP stands for “Creating A More Positive.” So CAMP Rehoboth means that its mission is to create a more positive Rehoboth Beach community. And over the last 25 years, it has done just that. The focus of this article is to share some behind-the-scenes efforts of many volunteers in Creating A More Positive Sundance.

There is no question that Sundance weekend is such a favorite event each year. The lines were long outside the doors of the Convention Center on Saturday evening, as people of all stripes and persuasions arrived. This first night of Sundance is known as Auction Night. Tables and more tables were laden with a wide range of donated items. As I stood in line, I was mildly amused when several people approached our group and asked what was going on. Why, on the Saturday night before Labor Day, was there such a long line of people waiting to enter? I imagined their real questions to be: What famous person was appearing there? What big attraction was the reason for such a long line of people? It would have been funny to reply, “Uh, well, we’re having a silent auction in a few minutes.” Of course, that would have vastly understated the real reason for the long lines.

Let’s back up a few months or more, long before Sundance weekend. Somewhere in the office he shares with Steve Elkins, perhaps even at their dining room table at home, Murray Archibald was thinking about a theme, a design, a color scheme, and much more, for the next Sundance. From those early idea brainstorms came the beauty and energy of Sundance. I saw several schematics of lights, pillars, stage and more that had been put on paper. These sheets looked like architectural drawings, as detailed as any floor plans for a new house. All this was essential to making Sundance the premier event that it has become.

Just as vital as the ideas behind Sundance were the hands, bodies and muscle of the many volunteers. The work ran the gamut, from simple tasks such as pasting descriptions of donated auction items to black boards to more complex duties such as building and “dressing” the fabric pillars across the floor of the Convention Center. By the time I arrived to lend a hand, so much had already been done. While I wish I had the luxury of spending the whole week prior to Sundance to volunteer my time, I was able to commit to being there when it was crunch time.

So the throng arrived, and the silent auction gave way to the live auction. There was so much energy and enthusiasm across the Convention Center. Auctioneer Extraordinaire Lorne Crawford coaxed increased bids from the audience for the variety of art, amazing trips, and a VIP scooter. I had the pleasure of serving as a “spotter” for the live auction, glancing across the crowd, looking for people engaged in bidding, or perhaps just scratching their noses. The auction ends, and people make their way home—or down the street for additional festive activity.

Then Sunday evening arrived and the Dance in Sundance began! This was the first time I volunteered for the Dance. Entering the Convention Center shortly before my shift would begin, I was struck by the number of people that this venue can accommodate. If there was ever an event there that would push the legal limit of total occupancy, this had to be it! The pounding beat of the music, combined with the strobe lights reflecting off the giant mirror ball, gave the crowd the energy it so longed for and welcomed.

Monday—Labor Day itself—is appropriately named when one considers Sundance teardown. It was very anticlimactic to arrive on Monday to help tear down and return the venue to its original state. Having enjoyed the previous two nights of admiring the beauty of the décor, the focus now turned to dismantling all that beauty. This task actually went faster than expected, due to the large number of volunteers who were there. And so the trucks were loaded up, props and decorations were moved back to storage, and Sundance 2015 is now a memory. The Super Magic Rainbow Glitter Ball has come and gone. And we are all grateful for the creativity of its designers, and the magical way in which Sundance takes place each Labor Day weekend.

Early in this article, I described having been amused at peoples’ questions about the long lines outside the Convention Center. The reason I was so amused is that I recall having asked that very same question a few years ago, before I knew about Sundance, CAMP Rehoboth, and the many other programs that bring people together. Now I consider it a privilege to volunteer my time for this event. The other volunteers, who put in many more hours than I do, have become good friends of mine. I enjoy seeing them out and about in Rehoboth Beach, greeting them by name and sharing fond memories of another Sundance. Together, we are Creating A More Positive Sundance. Thanks to all for allowing me to be part of it!