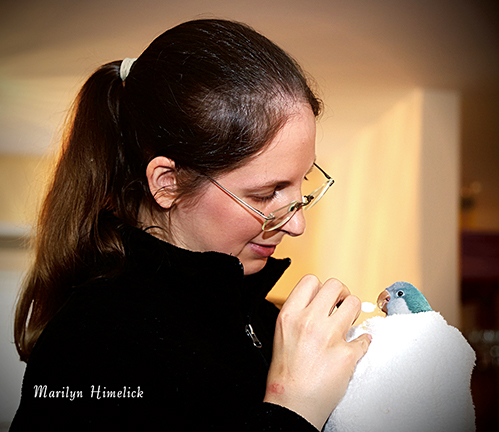 The Doctor Is In!

An old Czech saying, “Kdo hledá, najde,” he who looks, finds describes Dr. Christina Abramowicz, the owner of Veterinary Alternative Care. Dr. Abramowicz applies the scientific method to alternative and holistic medicine to treat dogs, cats, horses, exotic pets, and livestock. In her spare time she oversees a bird sanctuary. Her mother, an engineer, was born in what was then the Czech Socialist Republic. Her parents met in Poland where her father was studying at Jagiellonian Medical School. She was born in New Castle County where her father was completing his residency at the Wilmington Medical Center. Her family moved to Lewes when she was two years old.

Why Lewes? Her family wanted to live in a rural area where they could have more control over what they did, what they ate, and how they lived. Her father, Dr. Carl Abramowicz, a respected radiologist worked at Beebe Medical Center for twenty three years. He championed highly technical new ways of doing things throughout his career.

Christina attended elementary school and junior high in Milton; she was living just outside the Lewes school’s area and consequently was bussed to Milton. How was this? “Fine.” In 1995, Christina started Cape Henlopen High School. How was this? Fine. Digging deeper, she confesses that although she did some field hockey and volleyball, she was a nerd. Studying is what she does, even now.

After graduation, Christina went to the University of Delaware to major in Animal Science pre-vet. Graduating early, she went to the University of Canterbury in Christchurch, New Zealand to do post-graduate study in biology. Here she was exposed to the academic disciplines of conservation and animal behavior. She vividly describes the puzzle solving skills of cockatoos and keas and how they can use these skills to manipulate their environment. The pieces started coming together and Christina headed for Vet school. Since she is attracted to island nations where one must drive on the “wrong” side of the road, Ross University School of Veterinary Medicine on St. Kitts was her first stop. Because Ross was not yet an American Veterinary Medical Association accredited school, she transferred to the Oklahoma State University College of Veterinary Medicine. Her expression sobers as she describes the rigors of Vet School.

Eating processed foods on the run resulted in an unrelenting gastro-intestinal malady that medical science couldn’t decode. She admits disappointment in medicine’s limits but began exploring alternative treatments. She admonishes me, “ Write this down:

This quote from Wendell Berry, an American novelist, poet, environmental activist, cultural critic, and farmer, epitomizes Christiana’s world-view of the interconnectedness of all things.

After graduation, Christina took a job in North Carolina. She specialized in gross pathology, the macroscopic manifestations of disease in organs, tissues, and body cavities. Generally the term refers to diagnostically useful findings made during the gross examination of surgical specimens. In short order, she was asked to supervise staff. She began to doubt that this is how she wanted to spend her life. She “escaped” periodically to Florida to study evidence-based acupuncture at the Chi Institute and spinal manipulation at PELI—the Pasteur Equine Learning Institute. This education gave her a solid foundation and allowed her to better understand subtle health issues in animals. The pull of direct practice and family brought her home to Lewes in 2013. Considering sources of inspiration during her life, she singles out her mother. She describes her mother’s attitudes about work, comfort, science, and life. She remembers her mother’s help with calculus; basically, they were both stumped but worked it out together.

Dr. A. bought a home in a rural area close to where she grew up and where her mother still lives. She launched her mobile practice, Alternative Veterinary Care, and visited clients at their homes in Delaware and Maryland. In 2015, she attracted neighborhood attention when she applied for conditional use to see clients in her home. After some wrangling, her application was approved. In her typical understated way, she guesses that the neighbors have found her daily practice activities “pretty boring.”

Shortly, it became obvious that birds are a grossly underserved category of abandoned and mistreated pets. Dr. A. opened a bird shelter, Celestial Wings. In her characteristic low-key way, she itemizes the care and feeding needs of birds. She says that volunteers and fosters are needed for this enterprise.

When asked what she wants her legacy to be, Dr. A. hopes that she will have contributed to convincing people to feed their pets and themselves a diet based on fruits, vegetables, tubers, whole grains, and legumes and excluding or minimizing meat products and highly refined foods. I know I left with a more awakened attitude.