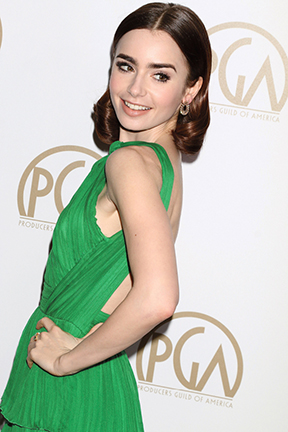 Just when you were fully annoyed and extremely tired and actually angry (hey, Roseanne!) at all the TV reboots and revivals, here comes the promise of 10 new episodes of Armistead Maupin’s Tales of The City on Netflix to make everything OK again.

The good news? It’s a continuation of the beloved stories you’ve read and watched since the 1970s (if you were a books-first fan) and/or the ’90s (if you were converted by the PBS and Showtime installments back in the day). So, there’ll be no rehashing the past, and Lauren Morelli (Orange is The New Black) is the showrunner.

Meanwhile, original cast member Laura Linney is back as Mary-Ann, picking up where she left off, and for this batch of stories, her now-adult daughter, Shawna, will be played by Ellen Page (Gaycation). Making it even sweeter? Anna Madrigal is still high and kicking, and Olympia Dukakis has already signed on to bring her back to life. Someone at Netflix deserves a cookie bouquet for this one. ▼

Lily Collins Does Not Clash with Titan

We’ve liked Lily Collins since we first saw her cute up the screen as Snow White in the fairly odd fairy tale movie Mirror Mirror. Then we found out she was the daughter of Phil Collins—imagine growing up hearing “In the Air Tonight” every time you went to the grocery store and realizing you had to live up to that. It’s sobering—and we became even more fond.

Well, she just got herself attached to the latest offering from queer writer-director Austin Bunn (Kill Your Darlings) and legendary indie producer Christine Vachon. Titan is the title, it’s being called a “survival thriller,” and it’s the story of a young musician (Collins) on a mission to find out what happened to her older sister, an environmental activist killed in a seemingly accidental fall. When our heroine digs up the past, however, she puts herself in danger. This is the first bit of information—it’s not even on her IMDB page yet—so don’t expect to be survival thrilled until 2019 or later. ▼

Lindsay Lohan Getting Dolled Up For Life Size 2?

Obviously you all remember that time in the year 2000 when Lindsay Lohan was a child star and she was in that TV movie called Life Size, which is the one where little Lindsay’s Barbie-esque toy doll comes to life and is Tyra Banks. It was so good.

And because it was so good, media mogul Tyra Banks has decided that things can only get gooder and now there’s going to be a Life Size 2. We need this. Tyra’s producing it. The world is quivering in anticipation. And Tyra needs Lindsay.

Ms. Banks is talking about the project out in public and more or less confirming that it’s happening with the now-grown Lindsay, which may mean Lohan is in negotiations and very close to signing. Or it could also just be one of those SoulCycle things about putting your intention into the universe and manifesting the reality. (Listen, we have no idea what those words mean, either, but they sound productive).

If you saw Lohan on Wendy Williams’ couch not long ago, it’s clear she’s in a good place and ready to be enjoyed as an actor again, so maybe we all just need to chant to the universe a little louder. ▼

The Pain and Glory of Almodovar

In 2019 the world of cinema will get lucky again, because that’s when legendary Spanish director Pedro Almodovar drops his next movie. Here’s everything we know so far: it’s about a filmmaker whose past choices come back to haunt his present-day life as he works on a new project. It’s called Dolor y Gloria (“pain and glory”) and it will star his longtime muse Penelope Cruz (Broken Embraces) and his other longtime muse Antonia Banderas, an actor who goes all the way back to 1982 with Almodovar and the film Labyrinth of Passion. Even the supporting cast is vintage Almodovar, with Spanish actresses Kiti Manver from Women on the Verge of a Nervous Breakdown, and Julieta Serrano, who goes back even further than Banderas to 1980’s Pepi, Luci, Bom y otras chicas del monton. Will it be a comedy? A drama? Both? We don’t care, we’re just ready for the calendar to flip. ▼