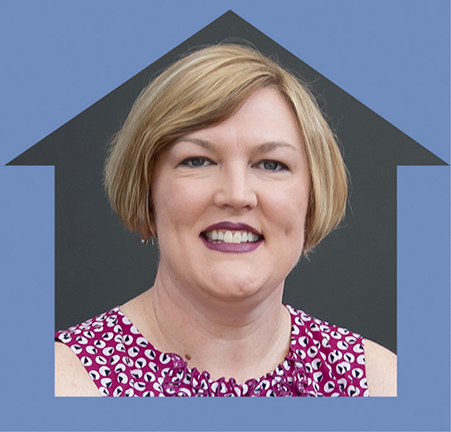 Jana grew up in Grandville, Michigan, a suburb of Grand Rapids and about thirty miles from Lake Michigan. In a childhood filled with games of kick-the-can, bicycling, jumping on a trampoline, and building forts, Jana found Grandville an ideal place to grow up.

At Calvin College, Jana participated in Big Brothers/Big Sisters, serving as a Big Sister for a couple of years. She graduated from Grand Valley State University and moved to Lansing, Michigan to follow her passion for social work at the Veterans of Foreign Wars National Home, a residential foster care program for children. It was there, in 1995, that Jana met her first love and came out as a lesbian. The timing of her coming out was right as Ellen DeGeneres graced the cover of People magazine, and soon after Melissa Etheridge sang, “Yes I Am,” paving the way for Jana to live authentically—even as some of her family struggled with their acceptance.

By living in the more metropolitan area of Lansing, Michigan, Jana had supportive friends and a lively LGBT community with opportunities to participate in women’s dances, potlucks and concerts, and a women’s softball league. Jana was a Volunteer Coordinator for Michigan Pride, the statewide pride march and festival, as well as the Social Activities Coordinator for Lansing Association for Human Rights, an LGBT advocacy organization.

In October 2001, Jana and some friends took a trip to Women’s Week in Provincetown, Massachusetts. One of the events was a “Single’s Mingle” at the now defunct, Esther’s Lounge. It was at this event that Jana and her wife Niki Nicholson first met.

Jana made her way over to the bar for a drink and passed by Niki. Niki said, “By any chance, you wouldn’t happen to be single?” Jana replied with, “As a matter of fact I am.”

They talked the rest of the evening and danced at The Pied. The two began a long distance romance that involved hours of talking on the telephone and flying back and forth to see one another in either Michigan or Maryland, where Niki lived.

Niki gave Jana a ring at Christmas in 2001 and by April 2002, the two were making plans to move in together. Jana packed up a U-Haul, resigned from her job at Livingston County Community Mental Health, and moved to Westminster, Maryland.

Jana knew starting a relationship in this fashion might sound risky, but she knew to follow her heart and trust everything would fall into place. Jana worked in the Baltimore area serving as a Case Manager and then Supervisor for Service Coordination, Inc., a non-profit care coordination service for individuals with intellectual disabilities from 2002 until 2015.

In 2013, Jana and Niki built a home in Lewes, and in 2015 made the decision to move here full-time. Jana began working as a Supervisor for Delaware Health and Social Services, Division of Services for Aging and Adults with Physical Disabilities, while Niki works as a Health Educator for CAMP Rehoboth. In addition, that same year, on June 11, 2015, Jana and Niki got married in a small ceremony with close friends in attendance and Niki singing, “The First Time Ever I Saw Your Face” to Jana.

In 2015, I attended a volunteer orientation. Soon after, Rebecca Moscoso asked me to join the CAMP Rehoboth Health and Wellness Committee focusing on grant-funded programming for seniors.

I think it’s a toss-up between the Sundance Auction and the Block Party. Both events are a lot of fun because they really provide a chance to meet up with friends and re-establish connections with people you may not have seen in a while.

I love working on the Health and Wellness Committee. Our committee worked on an LGBT Needs Assessment, has coordinated several forums and has launched several active, artistic and fun activities for seniors. We have some great new ideas for activities in the works. Our committee members are dedicated and we work together so cohesively.

As the baby of the family, strong women surrounded me and nurtured me but also pushed me along. This includes my Grandmother who came from the Netherlands to this country to start a new life, my mother who continues to be a good sounding board for me, and my two older sisters who I have always looked up to. They all are optimistic and persevere even in tough times and have quiet strength. I believe I have these qualities too.

If I went back to age 18, I would know that mistakes are the very best learning tools. It’s OK to make mistakes and not focus on what people may think or say. The very best way to deal with a mistake is to say, “I am sorry” and try as best as possible to fix it and to learn from the experience.

Favorite season here at the beach?

Fall is my favorite season. You generally still have good weather and you can navigate around town with a little more ease. The restaurants in town go back to having specials and parking meters go away. Let the fun begin, I say!

Do you have an LGBT hero?

I remember gathering with about twenty friends to watch the coming out episode of Ellen’s show in 1997. Ellen DeGeneres saying, “I am gay” on national television was such a watershed moment. It impacted her career, but she made a successful come back, and continues to use her celebrity platform to speak out as needed for LGBT rights.

The LGBT community has made significant progress in the fight for equality. Did you expect to see this in your lifetime?

What an amazing day it was when Marriage Equality became the law of the land in the USA! I was a little surprised but also was so hopeful after this.

Yes, I think it is fair to say that currently we have cause for concern. We have to stay active, informed, and not become complacent.

Jana, we thank you for your support these past two years. Your willingness to step up and work at any event is a blessing for CAMP Rehoboth. Volunteers are what make CAMP Rehoboth grow year after year, and you are part of that success. We hope that you will continue to volunteer and be a part of CAMP Rehoboth’s growth going forward. ▼