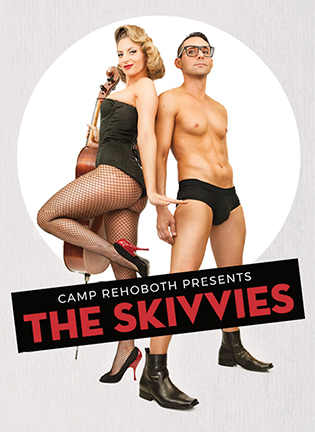 The Skivvies Set to Rock the RB Convention Center

Are you ready for a “hot musical comedy duo specializing in unexpected arrangements, incongruous mashups and, of course, highly toned displays of skin?”

We think so. Especially since the above quote comes directly from The New York Times.

Tickets are on sale right now at camprehoboth.com for Big Apple performers Lauren Molina and Nick Cearley and their hot show The Skivvies, coming to the RB Convention Center on Saturday, June 30.

Tickets to the show are hot, too, and are going fast for this Rehoboth show, sure to liven things up on a Saturday night in June. How much will they take off? Leave on?

The Skivvies are singers/actors/musicians performing stripped down arrangements of eclectic covers and eccentric originals. Not only is the music stripped down to cello, ukulele, glockenspiel and melodica, but The Skivvies literally strip down to their underwear to perform. What a concept!
Joining Lauren and Nick is special guest Nick Adams—a Broadway veteran who has been on stage in A Chorus Line, Guys and Dolls, La Cage aux Folles, Priscilla, Queen of the Desert, and more.

Skivvies was nominated for “Show of The Year” for the 2015 MAC Awards, with Out Magazine saying “The Skivvies have managed to carve out a niche that we never knew needed to exist: part Weird Al-parody and part sexy burlesque…an unusual explosion of satire and sultry.” The Skivvies have also been reviewed by The Wall Street Journal, People Magazine, Sports Illustrated, and many others.

The Skivvies have taken the stage at New York’s 54 Below, Joe’s Pub, Roseland Ballroom, The Smith Center in Las Vegas and Philadelphia’s Kimmel Center. The Skivvies have raised the temperature in Key West,  New Hope (PA), and many other places, including a special appearance in Broadway Bares.