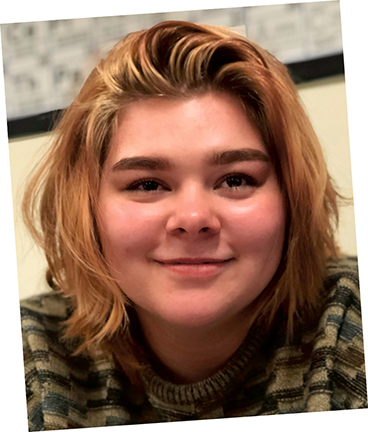 For this month’s LGBTQ+ Young Adult (YA) Column we meet Hannah Snader, a student at Indian River High School (IRHS). Hannah will be going to Delaware Technical and Community College, Dover campus under the SEEDS (Student Excellence Equals Degree) program and then will be transferring to University of Delaware majoring in astronomy with a possible minor in graphic design.  I first met Hannah on my visit to Indian River High School GSA (Gay Straight Alliance). She and another student greeted me with her kind and confident smile. Her smile is contagious. Hannah is currently the president of the GSA; Ms. Jenna Sinnamon is the GSA advisor. There are an estimated 35-40 IRHS GSA members.

My family is incredibly close, closer than those of a lot my friends and their extended family, I’m sure. We’re a very tight-knit group of people, always talking, always together. We talk, laugh, and argue. I’ve disagreed with my family on many things, we’ve fought, and argued, and been in conflict. But, I’ve never fought with anyone more than my father. We are both stubborn by nature; one never wanted to yield to the other. We have never ever had the perfect relationship, and for the last couple years it was rocky, even. After years of almost resistance from myself, we’re slowly building a better bond.

When I was young, from elementary to middle school, I thought the person I was closest to in my life was my father. And until recently when, I realized that wasn’t really the case; we weren’t distant, but there was always some kind of barrier between us that I couldn’t even see or sense. When I was around 12 years old, I found out something about myself that I knew my dad would disapprove of: I was attracted to girls. I was so scared of myself and of my own father and I hid from him and everyone I was close to, I prayed that I wasn’t gay. And I know that’s not uncommon at all looking back but I felt so alone, I didn’t know anyone else like me. It was a very dark part of my life and I lived the next almost three years hiding because of something I couldn’t control.

The first member of my family that I came out to was my Uncle Richie, my dad’s brother. He was someone I could talk to and not feel like I was going to get looked down on or lectured on for what I had said. He understood my feelings and didn’t belittle me for them. I told him at the Ocean City Convention Center on Saturday, January 7, and when I did, I said it in the smallest voice imaginable because despite his open mind I was still terrified of a reaction of hate. But what he gave me in return was love and acceptance and respect. I knew after I came out to him that sooner rather than later it would be my dad’s turn.

I came out to my entire family a few months later, I planned it a week in advance and told all my friends, my logic being if I tell them I’ll come out to my parents over the weekend, I can’t chicken out. I had to do it. Not going into much detail, my father’s reaction was not that of my uncle. He was upset, confused, and in a way, uninterested. He broke my heart and told me everything I knew I would hear and I couldn’t look at him or hold a real conversation with him for months. I wouldn’t tell him when I went on dates or things going on in my life. He saw it as a problem so that’s how we treated it. We didn’t talk about it and pretended there was no tension. We didn’t start seeing eye to eye and understanding each other until almost six months later. He started opening up to me and I started telling him about my life again.

It’s progress, and we’re still figuring each other out day by day but I wouldn’t change how anything happened. I genuinely think our relationship will grow to be stronger than ever and it made me into a stronger person. I found my own validity when I couldn’t find it from the person I love most. I’m not grown yet, I’ve barely lived at all, but living in the shadows has aged me deeply and finally living in my own light has made the future look a whole lot more worth it than it did before. ▼

Barbara is CAMP Rehoboth’s Youth Coordinator, working with GSAs in middle and high schools in Sussex and Kent Counties, and with other groups supporting LGBTQ+ youth.