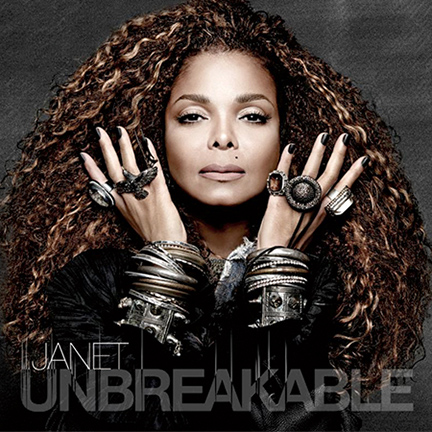 With her nipple safely tucked away, Janet Jackson resurrects a bygone bondage-less sound that’s more Good Times than straight up sexy time. No “Would You Mind”-type on-tape masturbation. No Damita Jo-era “Sexhibition.” “Miss Jackson if you’re nasty”? Not so much, at least for the time being. Instead, Janet’s 11th studio album, Unbreakable, is playful and PG, a welcome return to Jackson’s many formative years as the girl-next-door pop star du jour, when she didn’t rely on sex to sell a song—all she needed was her trademark sweetness. And, of course, Janet’s heart, heard throughout Unbreakable, which was produced by her longtime dream team, Jimmy Jam and Terry Lewis. Striking the redundancy of the bedroom-play songs she cranked out post-Velvet Rope, her first album in seven years puts empowerment first, reflecting on love, kindness, and hope—a Rhythm Nation for a new generation. “We all need to do better,” she proclaims on the socially conscious “Black Eagle,” a twinkly mid-tempo she dedicates to the “invisible people.” Like a lot of Unbreakable, from the autobiographical title track through lead single “No Sleeep” and the penultimate nostalgia of “Well Traveled,” this is a low-key, Janet-circa-“Runaway” affair. By the time she tributes her late brother Michael on the very-MJ-sounding “Gon’ B Alright,” surprisingly the most bouncy jam in the mix, it’s clear Janet isn’t just unbreakable—sometimes, she’s still unbeatable. Grade: B+ The piano tiptoes to a crawl, and then—with adorning horns, and Patty Griffin’s sky-high vocal climb—it briskly powers into an impassioned run. The song is “Servant of Love,” the title track off Griffin’s 10th release. Now self-employed (Griffin went indie for this, her latest), the celebrated singer-songwriter once again follows her transformative muse into the unknown, charting territory that eludes predictability and, instead, favors multi-genre alchemy—and that’s just musically. Beyond the blurred sonic lines of folk, blues, soul, and rock is a tapestry rich in earnest storytelling, a bloodletting of words beautifully strung together in typical Griffin fashion: from the world around us. Hanging out in the deep, dark corners of human suffering, Servant of Love is sometimes tragic, sometimes hopeful, but always compassionate and compelling. “Good and Gone” recounts the real-life fatal shooting of a young black man by police in a Walmart, and it’s appropriately stark, rumbling about like the coldest and windiest of days. The jaunty jazz-flecked “Gunpowder” could easily be interpreted as a clever dig at the NRA, and “250,000 Miles,” inspired by trafficked Nepali women, is drum-punched and heart-wrenching. But hope is never too distant. On “Shine a Different Way,” she reacts to the darkness before her, imparting light where she can. “Made of the Sun” and “Rider of Days,” a celestial stunner, also cut through the despair. Servant of Love is a world-weary reflection of our times, radiating optimism when so little of it seems to exist. Grade: A- CHVRCHES, Every Open Eye
CHVRCHES’s first album since their 2013 debut, Bones of What You Believe, eases into a steady synth build with “Afterglow,” electro shimmer and Lauren Mayberry’s pure voice guiding it through an otherworldly dimension. It’s that space that CHVRCHES occupies so well, their vulnerable heart pouring out over the evocative framework of their carefully calibrated EDM. Here, they don’t bend much musically. This is Bones…just better. But who are we to argue with the glistening pop brilliance of “Bury It” and “Clearest Blue” and “Keep You On My Side” and…the whole thing, really.

Lana Del Rey, Honeymoon
Lana Del Rey is sad again. On Honeymoon, the songs sway in the moonlight, softly, slowly. That kind of languid pacing is Del Rey’s go-to, a style she’s finessed ever since releasing her big breakthrough Born to Die. Her latest keeps that downer vibe alive, and in the way Ultraviolence didn’t pay mind to radio, Honeymoon stays true to Del Rey’s artistic intentions rather than faking them for mainstream consumption. Just listen to “God Knows I Tried,” a haunting guitar-strummed confessional—and then rejoice in knowing that she’s still blazing her own bittersweet path.

Various artists, We Love Disney
Dreams—they do come true. That is, if your dream is to have Jessie J slip into Ariel’s mermaid flapper for “Part of Your World” and also hear Gwen Stefani interpret The Muppets’ cutesy stargazer, “The Rainbow Connection.” These all-new contemporary takes on classic Disney songs from today’s biggest pop and country stars – including Kacey Musgraves’ “Spoonful of Sugar” and Ariana Grande’s “Zero to Hero” from Hercules—are pretty much magic, with UK sensation Jessie Ware being the perfect fit for “A Dream Is a Wish Your Heart Makes” and Rascal Flatts being Rascal Flatts on a foot-stompin’ version of “Let It Go.”