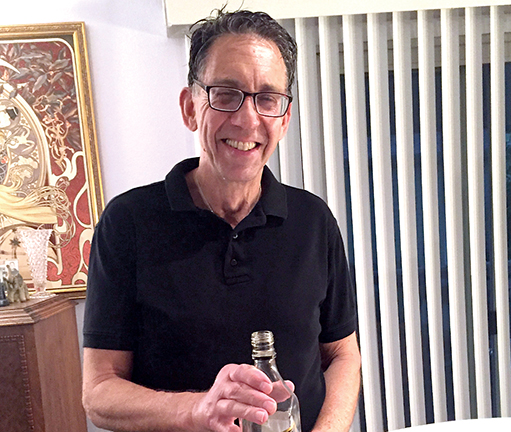 Ronnie Nicholls: From Golf to Gourmet

A neighborhood is a geographically localized community within a larger city. Neighborhoods are often social communities with considerable face-to-face interaction among members. Ronnie Nicholls was privileged to have grown up in two distinct Philadelphia neighborhoods: South Philly and Southwest Philly. His grandparents had settled in South Philly, a distinct Italian/Irish community. His parents settled in southwest Philly, an Irish neighborhood. He grew up with trees, garages, and row houses where people didn’t lock their doors. The local hangout was the street corner in front of Mrs. Fagan’s candy store. There was a distinct caste system in the neighborhood; you were judged on your athleticism, your sports team, and your success in fist fighting.

Ronnie’s grandfather, Bernard Nicholls was a world famous golfer who designed a golf course in France when only 17 years old and at 22 was the head Pro at the Philadelphia Country Club. His Sicilian maternal grandparents settled in South Philly. His Irish/Italian immediate family moved into a house owned by Ronnie’s maternal grandparents across the street from St. Barnabas Catholic School in Southwest Philly.

St. Barnabas was a large school of 1,800 kids taught by Sisters of the Immaculate Heart of Mary. Ronnie’s most poignant memory is being punished by his favorite nun for drawing a picture of the devil. He was ratted out by a classmate and still feels the betrayal. He describes himself as a fat kid, taunted by the others and called “four eyes.” His position in the neighborhood caste system fluctuated based on his success at athletics and mischief.

West Philadelphia Catholic High School for Boys required a city bus ride and a hike through a rough neighborhood. The Brothers of the Christian Schools ran an arduous academic program that motivated Ronnie to join an Order. While working as a file clerk at Lit Brothers Department Store, Ronnie was recruited by the Marianists from St. James High School in Chester, PA. After surviving many months of training in Virginia, Ronnie was accepted by St. Mary’s University, a Marianist liberal arts institution in San Antonio, Texas. Ronnie had experienced an epiphany at a retreat which resulted in a new self-acceptance. He went off to San Antonio in plaid bellbottoms with a resolve to be true to himself. The experience at St. Mary’s was “amazing, a magical place.”

With a Baccalaureate degree in history and English, Ronnie came back east to St. John’s Residence for Boys in Rockaway, New York run by Marianist brothers. Although he loved the work, he was very lonely and after two years transferred to the Cardinal Gibbons High School in Baltimore where he taught for six years. Too constrained by the order, Ronnie left the Brothers in 1980 and moved to Margate, NJ to live with his sister. After an unsteady time in sales, Ronnie got a job teaching elementary grades in a Parochial school and moved back in with his mother in Philadelphia.

Tired of a nearly hand-to-mouth existence, Ronnie took a job driving a laundry truck where he stayed for thirty years. Always with respect for neighborhood, Ronnie bought a home in Queen Village in 1985 for $63,000. In true cultural fashion at least another $63,000 went into rehabbing it. To augment his salary, he had begun working on weekends with a high end catering service. And he discovered the joys of travel. Over the next 25 years, he took three week trips to Amsterdam, Germany, Russia, Sweden, Spain, and many other places. But in 2010, his business was sold to a national corporation that didn’t share Ronnie’s values and loyalty to customers. He left the company.

Asked who had inspired him during his life, he tributes his mother. She survived divorce and got a job after years of homemaking. She opened a beauty shop, bought a motel, and was always ready to make things happen. Her work ethic and loyalty set a standard for him.

Ronnie had begun visiting Rehoboth in the late ‘90s. After he left the laundry company, he worked for a year at the IRS. His life was not as he wanted it to be. Always drawn to community neighborhoods, he moved to Rehoboth where he had friends. He marvels at the closeness of the Rehoboth colony and the number of friends he has. For someone so intimately educated in a close-knit home base, Ronnie feels genuinely at home.

Truly inspired by his mother, Ronnie needed something to do. Consequently, he is opening a catering business to serve our neighborhood.
Asked what he wants his legacy to be, he is thoughtful. “I want to be remembered well for the things I’ve done. Especially, by the kids I taught and mentored. I want to be regarded as having been a good influence.”

Now our job is to sit back and wait to be invited to a party Ron has catered.