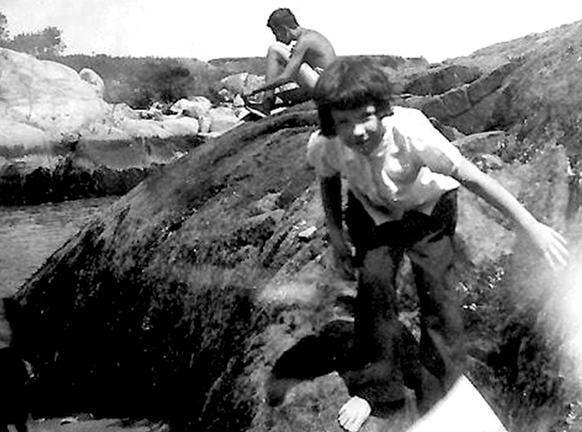 Where do little kids get their urgent need to know my gender? Is it intrinsic, some part of survival of the species? Parents should at least teach them that their question is rude. But no, the parents are as unsettled by what they perceive to be gender non-conformance as their children. That leads to bullying, even at home. “Darling, you’re a pretty little girl! Wouldn’t you rather play with your dollies?” Well, no. I had not the slightest interest in dolls. Dressing them up? Pretending they were living infants? Bor-ing.

I’ve been messing with gender all my life, preferring to present as androgynous. Perhaps it’s been rebellion, a slap in the face of  anyone who asks the perennial question, is it a boy or a girl? Perhaps I just liked the look.

I’m biologically female and have never wanted to be anything but a woman. At the same time, I have hated to wear female clothing since early childhood. It’s overpriced, often not well made, and uncomfortable. And I’m required to wear it because—it buttons to the left? Who makes these rules?

In the March 27, 2015 Atlantic Magazine, Megan Garber wrote “Every day, millions of people are walking around with these little reminders of gender inequality emblazoned on their chests.” She explored the possible history of button placement to male use of weapons and shields, to class, to holding babies, and maybe even to Napoleon. Laughable, the way we button up traditions so they don’t go away.

I don’t get angry easily, but I’ve always had a hair-trigger fury when confronted with gender assumptions. I had to hold in my anger—I was different and therefore wrong, wrong, wrong. Inside I was screaming, “How dare you—?” I didn’t know what to ask; I didn’t have the words. Why, why, why, did they have to know anyway?

Today, I still ask. What is this need we have to categorize one another? Why separate, why pit category against category? Probably it goes back to defending ourselves when we set up housekeeping in caves.

Gender labels are convenient, whether they once were prehistoric mating signals or are a way to protect today’s females from today’s males. Even as a kid, I wanted nothing to do with that mating stuff. The planet is overpopulated enough. I have the maternal instincts of a sidewalk. Does this mean there’s something wrong with me? Again, how dare anyone define what is right or wrong in my inherent makeup.

Once I was nominally a grownup, and might have enjoyed the freedom of confident androgyny, many feminists, as unlearned as I had been, condemned the boyishness of butch, the spectacularness of femme. It took me a long, long time to re-recognize my natural attraction to girly girls and not condemn myself for it.

I am terrifically grateful to the brave people who are speaking out on this subject in recent years, many of them young and fortunate to be more knowledgeable than I was at their age. Certainly, for most of them, reassignment to one extent or another is not the easy way out. I saw a meme yesterday that read: “Legality is a matter of power, not justice.” The fines and prison sentences that have been written into bathroom use laws are a way of controlling those who the powerful fear: scary us.

But what kind of bad joke is this aging business? We grow heavy or dangerously thin, our bodies lose or grow (unwanted) hair. We’re prescribed medications that can numb our favorite drives and increase disfavored urges. Female and male become less distinct until, at the 50th anniversary celebration, longtime mixed gender couples look like each other. By end of life perhaps some begin to realize all the fuss over who was who and who did what never mattered.

Many women have told me that they simply had no idea there were choices available to them: how to dress, who to love, whether or not to give birth, what work they could and could not do. Too many promising humans have been utterly crippled by primordial traditions and it’s time to quit mandating where our buttons go.