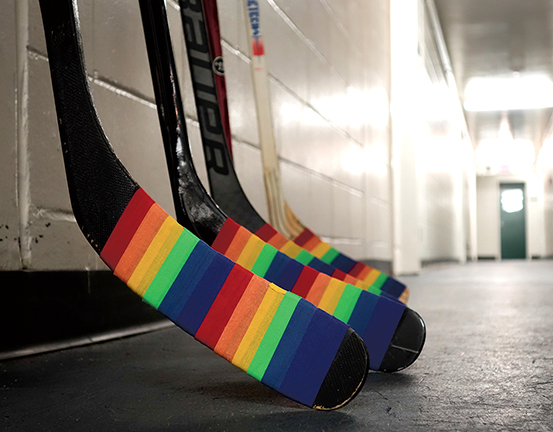 According to Kris Wells, Canada is known for two things: “hockey and human rights.”

If that’s true, he has reason to be proud. He’s a creator of Pride Tape, a new product that wraps those two things together. And it’s taking his country by storm.

Kris Wells—more formally Dr. Kristopher Wells—is an assistant professor of education at the University of Alberta. The Edmonton native also serves as faculty director of the school’s Institute for Sexual Minority Studies and Services (ISMSS).

One of the institute’s research projects tracked the use of “casual homophobia” on Twitter. The enormous prevalence of words and phrases like “faggot” and “no homo” led Wells, his colleagues and students to wonder how they could raise awareness of harmful language, and reduce it.

“Schools and sports are the last two areas of institutionalized homophobia and transphobia,” Wells says. “That’s why we’ve partnered with the You Can Play Project”—the organization dedicated to ensuring equality, respect, and safety for all athletes, without regard to sexual orientation, co-founded by National Hockey League executive Patrick Burke.

But, Wells continues, “there is still not one out NHL player. They’re role models for so many people. We wanted to find a way to get them involved in the dialogue.”

During the 2014 Winter Olympic Games in Sochi, the Russian government’s anti-gay propaganda law sparked a backlash by human rights activists. Rainbow flags flew all over the city, in a show of solidarity with LGBT athletes and spectators.
Those six colors—universally recognized as symbols of gay pride, and support of LGBT issues—also appeared on t-shirts and souvenirs.

Now—thanks to Wells and the ISMSS—they’ll be wrapped around hockey sticks all over the country.

Tape is ubiquitous in the sport. Players use it to better grip a stick; to protect the stick from wear and damage, and to impart more spin on shots and passes. For decades, it’s come in only two colors: white and black.

“This is a way for teams to signal support to kids at rinks everywhere,” Wells says. “Research shows that LGBT youth are less likely to participate in team sports, because of the homophobic culture of the locker room. The higher the level of play, the more hypermasculine the environment. Rainbow-colored tape is a badge of support to LGBT youth, which everyone can see. These six colors can change the hockey world.”

Edmonton is a natural birthplace for Pride Tape. Two years ago Andrew Ference—captain of the Stanley Cup champion Boston Bruins—was traded to the Oilers. He’d been involved with You Can Play, and asked Wells how to stay involved in his new city. That June, when he marched with the Camp fYrefly youth group, he became the first captain of any professional sport to participate in a Gay Pride parade.

The tape was created by Calder Bateman, an Edmonton marketing, design, and brand management agency. Creative director Jeff McLean says, “Unfortunately, too often sports remains a holdout in creating a welcoming environment for LGBTQ youth. That’s why I feel strongly about the ongoing relationship we have” with the ISMSS.

Getting Pride Tape to market was not as easy as slapping a rainbow on cloth, however. Professionals demand high-grade tape, and blending six colors proved difficult.

The manufacturer also had a minimum run: 10,000 rolls. A kickstarter campaign helped cover the cost of nearly $40,000.

Wells is confident the goal will be reached. Five thousand rolls of tape will be given to minor league professional hockey teams (hopefully NHL squads too). Other rolls will go to backers who contributed $30 or more. The tape will also be sold to the public. Proceeds will be split between ISMSS and You Can Play.

In addition, NewAD contributed space for printed materials in restaurants and bars across the country.

Feedback has been powerful. Email and letter writers say that seeing rainbow tape when they were younger would have made a major difference in their lives. One man wrote, “This could have kept me playing.”

As Wells prepares for a national rollout of Pride Tape, he’s already looking ahead. Tape is used on tennis racquets, baseball bats, lacrosse sticks—even on socks—for nearly every sport. Soon, rainbow tape might be as ubiquitous as the rainbow flag.