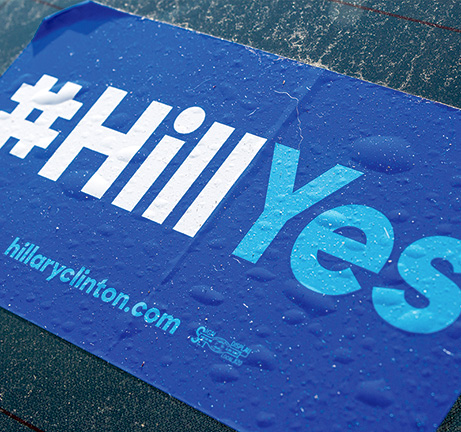 This is an election year I would have thought ripe for crazy political bumper stickers considering how more than half of Americans hold unfavorable opinions of both Donald Trump and Hillary Clinton. But as I’ve been driving back and forth between Rehoboth and Washington these past few months, I can’t help but notice a decided lack of presidential bumper stickers.

At first I thought it might be because DC, Maryland, and Delaware aren’t battleground states, but that doesn’t explain all the bumper stickers in previous elections. The voters in these states are opinionated and there were plenty of Bush, McCain, and Obama bumper stickers in 2008 and 2012. And I can’t forget Palin. People supported her too, at least for a little while. One does pass through some real “red land” on the drive between DC and the beach. And, how do you explain the absence of bumper stickers on all the Pennsylvania cars in Rehoboth, especially given that PA is such an important battleground state?

Political bumper stickers have been a mainstay of the presidential election season since the first I Like Ike adhesive stickers appeared on cars during the 1952 campaign between Dwight D. Eisenhower and Adlai Stevenson. I still remember the Nixon Now stickers that caused my liberal grandparents great consternation and the Jimmy Carter stickers everyone thought were so unpatriotic in their green and white color scheme.

I’m not the only one noticing a substantial change in bumper behavior. The conservative American Spectator magazine likens the dearth of political bumper stickers this season to how animals freak out before a tornado or earthquake or impending doom. People in both parties are going silent and running for cover.

Pundits also claim the rise of the Internet and social media platforms have played a role in the decline of the great American bumper sticker. Facebook and Twitter are now our 21st century bumpers where we showcase our status and loyalties. Thumbs up or down have replaced a honk or the finger. Online we can change our bumper stickers every day if we so desire without having to resort to a hair dryer, WD-40, and a plastic card to scrape a sticker off the car.

So what makes for a good political bumper sticker? A catchy phrase helps, as does readability and a good font. Dump Trump is a good one. So is Feel the Bern. GOP candidate Marco Rubio used all lowercase letters for his logo and bumper stickers, which initially appeared to be a good choice but later played into Donald Trump’s “little Marco” narrative that Rubio was short and weak. Hillary’s blue H and red arrow bumper sticker, to no surprise, is both liked and hated. I think it resembles a hospital exit sign. Trump’s official navy blue and white bumper stickers are just plain unimaginative. Like his campaign, you can tell he didn’t really put any serious thought into it.

Obama, on the other hand, had great bumper stickers. The hope image of Barrack became a pop culture phenomenon. And oh, that O: Fresh, artistic, a symbol for a movement forward and a new day. I put one on my aqua Thunderbird convertible and it looked damn good. To this day, it’s the only political sticker I’ve ever attached to its bumper. That’s saying a lot because I was raised in a family that considered bumper stickers the height of tackiness.

My father once chased down an employee of Tweetsie Railroad and dragged him back to remove a bumper sticker that had been slapped on the chrome bumper of our new Buick. This practice was a common one at tourist traps destinations back in the day regardless of whether you wanted a bumper sticker or not. It was cheap promotion. In fact, that’s the primary reason bumper stickers were developed in the car-crazy years following World War II.

My favorite bumper sticker this political season is the one I spotted on the back of a metallic green Kia Soul that was speeding across the Bay Bridge one evening. Even though I’m 100% behind Hillary, I cannot deny the brilliance of the black, white, and yellow sticker that simply said, “Liar Liar Pantsuit on Fire.”

Speaking of lies, that Obama bumper sticker I mentioned putting on my aqua convertible…. Well, it was actually a magnet. I only applied it when driving back and forth to Rehoboth. We live in such a crazy and polarized world that a political bumper sticker today is nothing more than an open invitation: Vandalize my car please! I think not. And I think a lot of people agree.