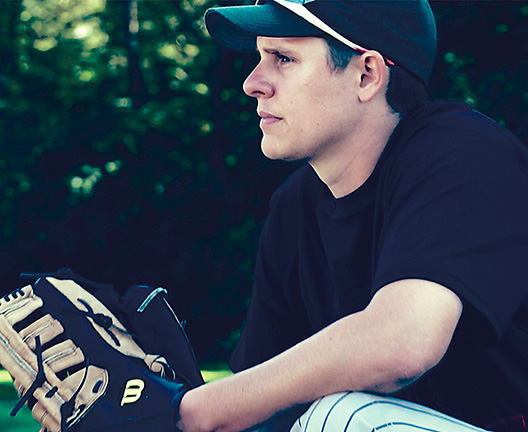 Stephen Alexander was a typical boy. He loved Transformers and Gobots (but did not find out until later that they were a product of Hasbro in Providence, Rhode Island, just a few miles from his home in Chepachet).

He spent hours with the neighborhood kids, playing basketball, baseball, and Wiffle ball. “I never wanted to go home,” he recalls.
There was one problem: His parents treated him like a girl. That’s what they saw when they looked at his genitals.

And that’s why Alexander competed on girls teams at Ponaganset High School. He was a superb athlete—one of the best in the school’s history, male or female. He scored more than 1,000 points for the Chieftains’ girls basketball team, winning four consecutive state championships and earning All-State first team honors.

He was offered a full scholarship for the basketball team at Stonehill College, a Division II Jesuit school in Massachusetts. But he gave it up, because being in the women’s locker room finally became too unbearable.

Majoring in religious studies, psychology, and philosophy, Alexander sought to discover who he really was.

His journey of self-discovery took him about as far away from Rhode Island as he could go: Tasmania. There he studied Buddhism. Studying further, through a Semester at Sea program, he finally understood himself as a transgender man.

He returned to his home town, and finally came out to his parents. But Chepachet is a very small place. Soon, he headed to the biggest city in the U.S.: New York.

Everyone knew him in Chepachet. In New York, no one did. That’s where he began his career as a teacher. It’s also where he had gender reassignment surgery. His parents, who had taken their own path to understanding their son, were there. Doctors told them that most parents seldom are.

But the pull of home was strong. His sister has two children, and Alexander wanted to watch them grow up. He returned to Rhode Island, and tried to figure out what to do next.

A female friend told him the boys middle school soccer team needed a coach. Alexander stepped in. Soon he was coaching their basketball and baseball teams. Tennis and volleyball followed. He coached boys teams, and girls.

He loved what he was doing. There were challenges—managing young adolescents is not easy, and their parents can be a handful too—but that’s part of the joy of coaching.

Though he was in a small town, and most people there had known him as a champion female athlete, he says that being a trans man was never an issue. No one said anything to his face; no one complained to the school board. There may have been whispers, he admits, and perhaps one or two youngsters did not try out for his teams because of the coach. But if that happened, he says, “I never heard about it.”

He worked with coaches he’d gone to school with. He coached boys and girls whose parents he’d played sports with, or been taught by. Some of those adults still call him by the name they remember. They try to call him “Stephen,” but old habits die hard.

Perhaps they’re reminded by the banner hanging in the Ponaganset High School gym. It honors the few players who scored more than 1,000 points in their basketball careers. Alexander’s is there, with his girl’s name.

There is one place his name does not appear: the Ponaganset Athletic Hall of Fame. His sister nominated him, but he has not been selected.

Alexander was surprised— but then again, he wasn’t. What people say behind closed doors is not always what they say to his face.

Alexander has a lot to say. He’s created a website called Transition Games (transitiongames.com), in part to highlight his public speaking career. “Stephen’s story brought me to tears, and to a new understanding of diversity in sports,” praises a college student who heard him talk.

“It’s so important to have conversations about transforming sports,” Alexander says. “We need to help kids recognize early what happens when we separate the sexes. There’s this notion that boys are better, faster and stronger than girls. Sports is really about finding out who you are, whoever you are, then working together to heighten competitiveness and honor your opponents. There’s still a lot of work to be done.”