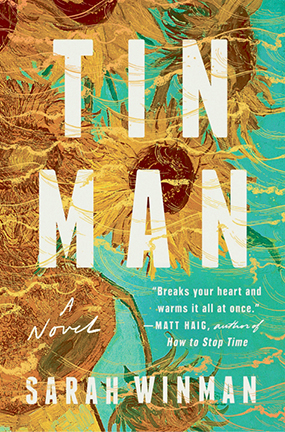 The picture reminds you of a thousand things.

You recall the day it was taken: the smell of the air, the background sounds, food and drink, laughter, and the sense that this was forever. You’ve seen that photo many times throughout the years, but it never fails to remind you of the best of times. Or, as in the new book Tin Man, by Sarah Winman, it may represent the worst.

Ellis Judd rarely thought of reading anymore, though there were books piled around his apartment. They were Annie’s, so he ignored them. He mostly ignored the picture sitting among them, too, and he tried not to think about the people in it.

But, of course, that was impossible; his face was one of the three in the photograph. And there was Annie, his wife and the love of his life, five years dead from an automobile accident. And Michael, his best childhood friend.

He’d never forget the day he and Michael met: Ellis was visiting Mabel, an older woman and the local greengrocer, when Michael arrived to stay. Both twelve years old, they’d become on-the-spot friends. Years later, Michael was the reason Ellis met Annie, and she instantly loved him, too. Ellis was glad for it.

But then, not too long after Annie and Ellis were married, Michael seemed to disappear and Annie pestered Ellis on and off. Didn’t he wonder where Michael had gone? Didn’t he want him back in his life? Didn’t Ellis miss his best friend?

He did—and one day, Michael walked back in, as if nothing had happened and things seemed to pick up where they’d left off. Ellis was content again with his day-to-day until the car accident, and his entire world died.

It took awhile to heal—as if that would ever fully happen—but his losses made distant memories keener and Ellis began thinking about a painting that his mother and Michael had particularly loved. Having it would mean a lot so, knowing that it was stored in his father’s attic, Ellis fetched it.

That’s when he found a boxful of Michael’s things, including a notebook….

There are a thousand emotions that you’ll feel when you read Tin Man, starting with a melancholy sense of foreboding. Don’t beat yourself up for it, though. Every character here has reason to feel that life is no good.

That alone might make you not want to read this book—why try something when you know it’s going to depress you, right? Wrong: author Sarah Winman also repeatedly offers a most persistent flame of hope in her story, from Ellis’ mother, who finds beauty in a booby-prize painting; to Annie, who happily understands Michael’s needs; and Ellis himself, who learns again what he already knew.

Truth be told, readers will know it, too, long before they get to the pinnacle of this book—but the love-story-not-love-story that pulses to the lingering end is worth the journey, times two. And that makes Tin Man a book you should picture yourself reading. ▼