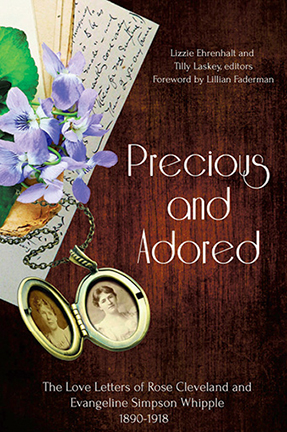 If you’re waiting for a delivery, those words (or something like them) could absolutely make your week better. Just think, there was once a time when you waited days for messages to travel cross-country, and now it happens in an instant—although you’ll have to admit, after reading Precious and Adored, edited by Lizzie Ehrenhalt and Tilly Laskey, foreword by Lillian Faderman, that it’s sometimes just not the same.

She was fiercely independent, too: after her husband, Michael, who was 48 years older than she, died and left her with $2.5 million in assets, Evangeline continued to travel, often solo, and tend to the estates she owned.

It was on one of her trips that she met Rose Cleveland.

Growing up, Rose also had access to the finer things in life. She was educated, refined, and self-reliant, and was a natural stand-in for White House hostess when her bachelor brother became the nation’s 22nd president. By the time he married Frances Folsom in 1886, Rose was a much-admired public figure.

“It is possible,” say Ehrenhalt and Laskey, that Rose and “Eva” met in Florida in 1890, or they may’ve been slightly acquainted before a Valentine’s Day party they attended in Tampa that year. Whenever it happened, by April of 1890, letters began flying back and forth between them “in an explosion of anticipation, confusion, and passion.”

Their love affair endured for “almost three decades,” except when Simpson—who the authors believe was “sexually fluid”—was married to Henry Whipple, the first Episcopal bishop of Minnesota. She appeared to have genuinely loved the older man and had fallen “in love with God.” Cleveland pleaded through anguished letters for Eva to reconsider but the marriage proceeded, lasting until the Bishop’s death in 1901. Shortly afterward, Cleveland and Whipple took up where they had left off.

Given today’s more open climate, there are two remarkable things about this story, as editors Lizzie Ehrenhalt and Tilly Laskey point out in Precious and Adored: it all happened at a time when same-sex relationships between women were encouraged and somewhat celebrated, although homosexuality itself was condemned and often illegal. Women’s same-sex relationships were called “Boston marriages” with whimsy and a wink. But Cleveland and Whipple, says Faderman in her foreword, “could have found no comfortable terms to describe” themselves.

It’s also quite noteworthy that most of the correspondence quoted in this book was taken from letters Whipple received from Cleveland, and saved. No one knows what happened to the letters Cleveland received from Whipple, and readers are largely left to consider the possibilities.

You’ll have a chance to do that by reading those letters, presented here following a very lengthy introduction. Doing so is an exercise that may be alternately difficult due to their quaint Victorian floridity, and absorbing for their naked emotion. Just know that the true heart of this important entry in the history of lesbian and queer foremothers lies in its first half, making Precious and Adored a book that delivers. ▼