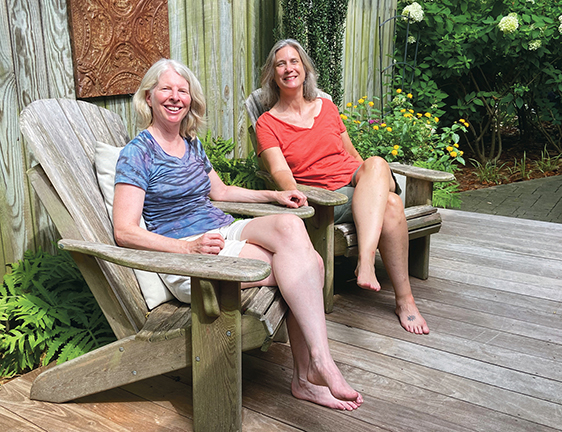 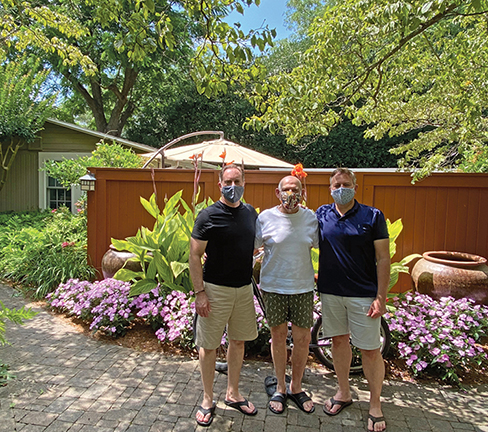 Five years ago when Takoma Park, Maryland, residents Liz Cook and Anna Prow decided to make the leap from summer renters to Rehoboth homeowners, the couple made a list of all the things they wanted in a property. Tree canopy was extremely desirable, as was access to the beach and to bike trails. The gals wanted a private outdoor space and a garden, and the ability to walk into town. But most importantly, they didn’t want to break the bank.

It was a thoughtful and measured approach, which one might expect from a couple of experienced nonprofit executives, and very unlike the way I bought my cottage, which was under the influence of a couple of Bloodies and a vague romantic notion of what a beach house ought to be.…

After looking at overpriced places and uninspiring fix-me-ups, the couple discovered Woodhugh, a unique condominium compound—five units in a big stucco house and a separate cottage on a beautifully landscaped double lot in Rehoboth’s Pines neighborhood.

“It’s reminiscent of a summer camp,” says Liz, “tucked back from the street behind mature rhododendrons, crape myrtles, and magnolia trees. Size wise, a one-bedroom place was all we needed for long summer and fall weekends. It felt so private. And it had a pool!”

I look around at the wooden deck, lush ferns, bosomy hydrangeas, and Adirondack chairs, and I definitely feel the camp vibe. I ask Anna what renovations they did. “We replaced the rotting deck. Inside, we mostly edited things down for a clean, crisp look. I wouldn’t call it minimalist but it is certainly essentialist,” she explains.

“Fresh paint really helped. We went from pastels to a creamy Swiss coffee and white color scheme and then added color with large scale art pieces.” Their aesthetic worked because it certainly feels roomy and it blends seamlessly to the outdoors.

The ladies have come to love the Woodhugh community. A welcome surprise was learning about the property’s LGBTQ history. To tell that story, they introduced me to Woodhugh long-timers Tom, Ray, and Michael.

Michael, the unofficial historian, first visited Woodhugh in 1965 when he was 23 years old. Like today, the house was subdivided into small units, each with a screened porch. The separate cottage, which Michael now owns, had once been a fishing shack. Miss Kinder, a Rehoboth Beach Elementary School teacher and an amateur brick mason, owned the compound.

“She never married and I suspect she was a lesbian,” Michael tells me, “but it was never discussed. She did, however, lease the places out to gay men from Washington, so that tells you something.”

One of the renters, Hugh Gittinger, bought the compound in the early 70s and continued the tradition of renting to gay guys. He made a few upgrades to the property, the most important being the 1976 addition of the swimming pool.

“Woodhugh, as the place was called,” Michael continues, “soon gained a reputation for wild late-night pool parties that sometimes spilled over into the Epworth Cemetery. Oh, it was naughty but fun.” As Hugh grew tired of taking care of the place and with Rehoboth becoming increasingly popular with gay folk, a few of the fellas came up with a plan to buy him out and turn it into a co-op property. This would bring an influx of capital for improvements and allow the owners to keep it gay.

Tom bought in when Woodhugh officially became a co-op in 1984. It stayed a gay retreat, but also a respite from the storm that was AIDS and the bully tactics of local officials and homeowners trying to keep homos out of Rehoboth. That fight led to the founding of CAMP Rehoboth.

There were also some financing issues with local banks that never fully embraced the notion of a cooperative property, so in 1991 the owners converted Woodhugh into a condominium. The change begat change because the community subsequently lost control of who could buy in.

But like the mythical Barbary Lane in Armistead Maupin’s Tales of the City series, this property continued to attract a certain clientele. A straight couple—a professor at St. John’s College in Annapolis and his pianist wife—bought in, as did more gay men and a few lesbians. Everyone got along.

In the early 90s, Tom met Ray, a landscape architect from Philadelphia, and Ray took on the master gardener role. It’s hard to imagine the gardens as neglected because now the place is lush with trees and plants that bloom throughout the spring and summer and provide a special sense of privacy—much like Barbary Lane did for the characters in Maupin’s novels. The landscaping is neither fussy nor too naturalistic. Frankly, it fits the property and feels true to its roots.

This connection to the past is important to Liz and Anna. Liz, for example, is taking on oversight of the landscaping as Tom and Ray recently moved on. Anna is focusing on infrastructure issues such as a new air conditioning system. “We like being a part of the LGBTQ history of Woodhugh and Rehoboth,” they tell me while perched comfortably in matching Adirondack chairs, “and we’re glad we can help tell the story.” So am I!